Knight resigns from EDP and Constitution Square group due to anti-BLM post; GABBF will vote on his dismissal 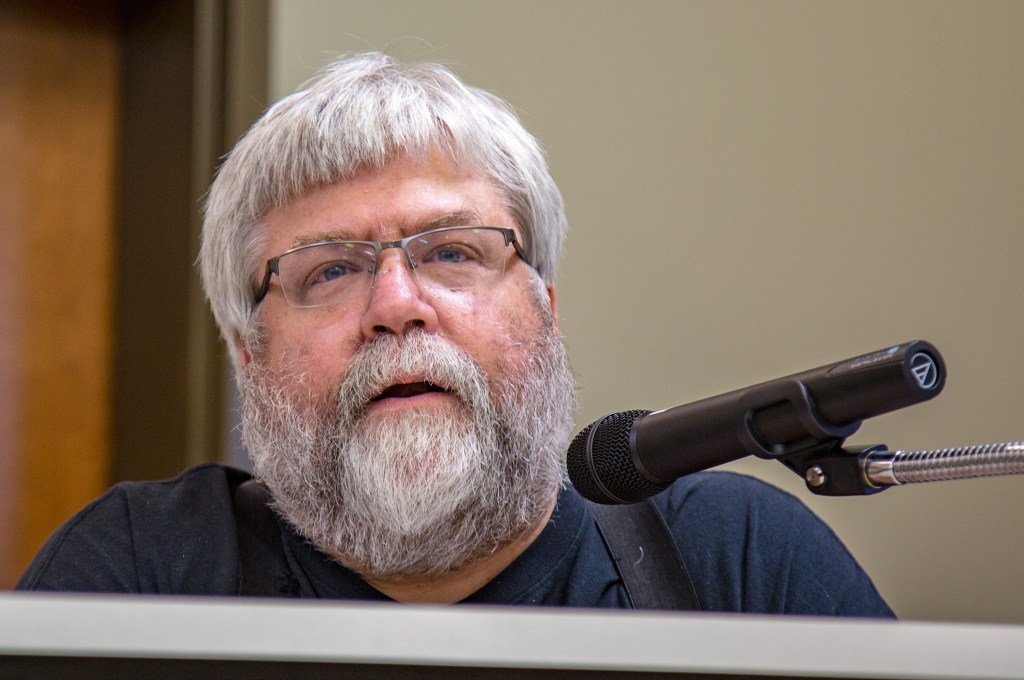 This social media post by Steve Knight led to his resignation from local organizations, while others consider his future with them. The account on which the comments were made has since been made inactive.

The sandwich board that stands out in front of the restaurant on South Fourth Street boasts of specials, or sentiments like “We miss you.” And written in small letters on the sign is “#BLM,” which owners Alex and AnnYager McCrosky say is important to them; they were asked by employees if it could be displayed, and they were all for it.

“And to think that this guy is actually a business owner, and associated with the EDP,” Alex McCrosky said during Harvey’s recent live-streamed happy hour. They chose not to identify Knight or his business by name.

Knight owns Cool Jazz Web Design. He was a representative for Junction City on the Economic Development Partnership Board, but resigned after the post was circulated. He was contacted for this story, said he would consider making a statement, but added “no comment at this time.” No response has been received after further contact.

He is also secretary of the Great American Brass Band Festival, and has been providing his website expertise as an in-kind service to the organization. GABBF released a statement saying Knight was asked for his resignation but declined.

“The vulgar and divisive comments made by Mr. Knight are unacceptable,” the release reads, by GABBF Chair Patrick McClure. He said the situation will be addressed at the next meeting on July 28, “and the matter of his removal has been added to the agenda on the otherwise unanimous recommendation of the other officers of the executive committee.”

However, McClure said the decision of whether to utilize Cool Jazz Web Design is a “day-to-day business decision. That relationship is now terminated.”

The elephant in the room

Because the McCroskys were contacted about the post by so many, they decided to discuss it during their weekly Monday-night live stream they began since the COVID-19 pandemic hit. Last Monday’s stream has been viewed close to 4,000 times.

“Let’s tackle the elephant in the room,” Alex McCrosky said, and read the post after telling viewers to get kids out of earshot.

AnnYager McCrosky said they chose to reply because the team at Harvey’s “are like family to us,” and consist of various ethnicities. Being a place “where friends gather” and everyone feels at home was their top priority when they opened the restaurant. She said it was especially hurtful because Harvey’s “started on the corner in Junction City,” as Happy Hour Barbecue.

“And to have the representative of that town say such things about our business …” she said, while becoming emotional. She added she knew it was not the sentiment of the EDP, and that reps from the partnership contacted them directly “to check on us” after they were made aware of the post.

Jody Lassiter, president and CEO of the EDP, released a statement with Marty Gibson, the board’s chair. It reads: “The EDP works hard to promote economic growth throughout Boyle County in an inclusive manner. The recent social media post made by board member Steve Knight on his personal account does not reflect the values of our organization. Mr. Knight is appointed by the Junction City Mayor and Council to represent their interests on the EDP board, and serves at their discretion. His opinions are his own.”

AnnYager McCrosky said she “certainly hoped it wasn’t the sentiment of Junction City,” a town she’s “grown to love,” where a location of her family’s funeral home business operates, as well.

Although word got to The Advocate-Messenger that Knight had been “fired” by Junction City, Junction’s mayor, Jim Douglas, said that’s not so. He said Knight called him personally to resign.

“I don’t have any other comment to make about it. I don’t get on Facebook and read that junk, I don’t even know what was said,” Douglas said, and wasn’t interested in having the post read to him.

In GABBF’s statement, McCure said, “Moreover, the committee wishes to unequivocally state that the public derision of a downtown restaurant where our friends gather, whose owners happen to run two different sponsoring businesses in addition to their own personal contribution of funds and years of their own personal time, hospitality and inspiration, will not be tolerated.”

Knight has also been the chairman of the Constitution Square committee, which several have questioned if he will be released from. The park is the location of the Soul of Second Street Festival, which highlights the contribution of African Americans to the business district in downtown Danville.

On Thursday, Judge-Executive Howard Hunt said the committee was not appointed by him, it was developed through a paper ballot vote by the court where 25 names were included of those interested in serving. The top seven vote-getters were compiled in a list by the county attorney’s office.

Hunt said the committee itself determined who the chairman would be. He said that so far, “I’m not aware of any magistrates … that have received any inquiring about it,” and that neither had he.

“I would hope, if there’s some need of action there, they’d bring it to the court for recommendation,” Hunt said. He said he had not seen the post himself and wasn’t sure what it said; after it was read to him, he said he would talk to magistrates to get some feedback.

About two hours later, Hunt said, “I have accepted Steve’s resignation from the Birthplace of Kentucky Committee (Constitution Square) effective today” via a telephone conversation.

Later on Thursday, committee member Ben Miles said he had emailed Knight asking if he was planning to resign, but hadn’t heard back from him. “So this is good news to me,” Miles said.

He said not too long ago, a few hundred people peacefully demonstrated at Constitution Square on behalf of the BLM movement, and he was one of them.

“When I found out the chairman of the committee called us all terrorists, I was pretty shocked and offended,” he said. Miles said adding a violent narrative to what was otherwise a peaceful, civil gathering between demonstrators and law enforcement “is ridiculous.”

“I was very proud of the way demonstrators acted,” Miles said, and that there is no place in the community for sentiments like what Knight posted, “but certainly not on this committee, one that’s overseeing this very special place in Danville.”

“I use this phrase all of the time: ‘‘Words mean things.’ Black lives do matter,” Alex McCrosky said. As a white man, he said he realizes he’ll never understand or know what it feels like to be looked at or treated differently because of race.

“I get that. But those three words ‘Black Lives Matter’ — pro-black doesn’t mean anti-white.”

He said in tight-knit communities like Danville, “this kind of thinking” always gets out, and that neither he nor AnnYager had received any direct communication from “this individual,” meaning Knight, about his problem with the hashtag. They held the sandwich board up during the live stream, showing the small “#BLM” written in chalk.

Alex McCrosky said people of all different backgrounds and political ideology hang out at Harvey’s, which is something he loves about it. “If you have a problem with #BLM on that sign … come inside. Let’s talk about it. Discussions are good.”

AnnYager McCrosky, who continued to fight back tears, said she was disappointed. “I expect more here, in this town I love. I expect people to be better than that — just be a good person. Why be mean? Just to mean and spew ugly things? I don’t get it ….”

“When you do that, now we can see you — when you were hidden before,” Alex McCrosky said. “Here’s the thing — now we see you. Now we know what we’re dealing with.
“We own the fact that it’s on our sandwich board. It’s going to stay on the board, and I hope everybody in town knows that we think Black Lives Matter. If you have a problem with it, come in and we can debate it, if you’re civil. Or you can go somewhere else.”

Later, after the livestream, Alex McCrosky said yes, it was a pain to start their week off having to continually respond to people questioning the post, which was made on Sunday.

“But if a week’s worth of us being in an uncomfortable situation solves some problems in the community, and helps the county solve some of its personnel problems — so be it.”

Patrick McClure, board chair of the Great American Brass Band Festival, said two board seats “were already being filled,” and that was planned to happen at the next meeting on July 28. He said should another vacancy be created upon “a vote to remove” Steve Knight as board member, the position will be filled during the October meeting. Nominations for that seat should be emailed to mcclure@danvillekyattorney.com, or by calling McClure’s office at (859) 236-8888.