Looking Back: The Kentucky Club

The Kentucky Club was organized in the late 1950s by a group of local residents and former residents desiring to maintain congeniality and friendship among themselves and others.

The Kentucky Club of Danville and branches of the club were set up for former residents in Cincinnati, Chicago and Detroit. Each year the group met in one of the member towns which serve in rotation, as headquarters for an annual meeting. 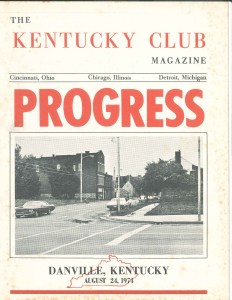 The 60-member Kentucky Club of Danville hosted the organization in 1966 and 1974, according to articles in The Advocate-Messenger. The 1970 gathering was expected to have 1,500 people at the local convention. Most events were held at Danville High School and tours of Danville

were hosted by local members.

Club president Cecil Cohen said motels were booked solid for the 1970 weekend event. Some people traveled in buses and others came by automobile for the weekend event.

The 1969 convention was held in Chicago when approximately 1,200 members attended. Officers said each meeting has become larger and more successful.

Speaker for the Danville 1970 convention was H.B. Russell, formerly of Louisville, who lived in New York City, worked with publicity coordination of the Pepsi-Cola Co. Russell’s theme was “Progress of the Black Man.”

A 50-voice community chorus composed of local residents who were members of various church choirs was directed by Lola Dale of Danville and was a highlight of the event.

A banquet was held in the DDHS cafeteria, and guests attended a production at Pioneer Playhouse. A ball was held at the Danville National Guard Armory which concluded the Saturday events.

Breakfast Sunday morning was at the Masonic Hall clubroom on South Second Street. Many attended church services and visited with local relatives before departure to their homes Sunday evening.

A souvenir Kentucky Club Progress magazine prepared in 1974 for local distribution tells the story and photos of the convention theme, “Progress of the Black Man.”

Madison Terrance was president in 1974, and Cecil Cohen was vice

Harry E. Field, a graduate of Bate High School, Knoxville College in Tennessee and University of Cincinnati, was speaker. He was principal at Lincoln High School in Owensboro.

An article in the magazine asked: “Where will the Blacks Go When Second Street is Gone?” told about an era for the black citizens coming to the end. For the past few years Urban Renewal has been on the move of this area and has now obtained the complete street. As history is written it should be noted that the blacks preserved many of the historical buildings in the area.

“The E.O. Richardson family kept the Grayson Tavern property and their residence, adjoining Fishers Row for many years until it was sold to Urban Renewal. The Goldsmith House was obtained by the Federated Club of Danville a number of years ago and was used as a club room. The late Nash (Bunk) Raum owned or had in his possession a building the now restored Apothecary Shop.

“We hope these people will be remembered when the street is completely restored.”

“Second Street was once a booming business area in the black community. It was known over the state as the black street of Danville. Many people came on Saturday night seeking fun and relaxation with their friends. At one time, there were five restaurants, barber shops, cab station, dry cleaning, pool hall, grocery store, Masonic Hall, and dispensary.

“During that period of segregation, restaurants were not open to them on Main Street except for back door carry out service. This caused dissatisfaction and fury among the blacks, but little could be done at that time. During depression and pre-war years, it was hard for many to make

ends meet so they came to Second Street to socialize with friends and forget for a little while the problems and hardships of their lives.

“The final conclusion is that the blacks will not necessarily need Second Street but all or any streets in which to live as equal Americans and not pressed together in one restricted street of area.”

The program also contained photos of Bate High School graduates who had successful careers, and advertisements from local businesses.

Faces of our farmers: Karen Hughes