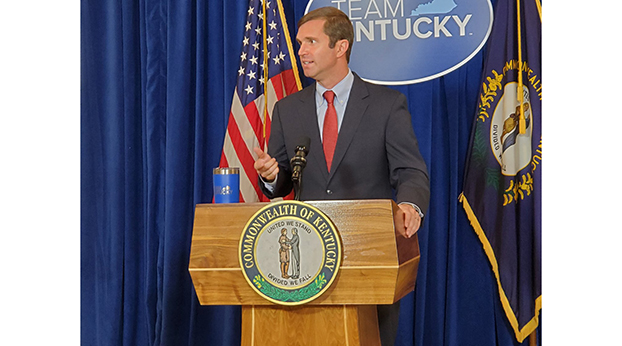 Gov. Andy Beshear announced new restrictions and a travel advisory on Monday due to the high number of COVID-19 cases over the past week.

Four of the five highest days for new cases of the coronavirus occurred during the past seven days, including 979, the one-day record, on Sunday.

“The virus is spreading out there. It’s spreading significantly. We must make sure that we take the steps to keep ourselves safe, our families safe and each other safe. Any concept that there’s just more testing out there and the virus is still in the same place is absolutely and categorically false,” the Governor stated. “A fact’s a fact. Twitter can’t change that. Make sure that you know where we are right now so we can adopt what we need to get through.”

During a Monday press conference at the Capitol, Beshear said there are clusters of cases from people who go to the beach and bring the coronavirus back with them, so he announced a travel advisory.

“We are asking anyone who goes to a state that has over a 15 percent positivity rate, to quarantine themselves for 14 days when they come back,” he said. “These are areas where right now this virus is uncontrolled.”

Eight states are now above that 15 percent threshold: Alabama, Arizona, Florida, Georgia, Idaho, Nevada, South Carolina and Texas. A ninth state, Mississippi, is just below that level at 14.82 percent but is included in the advisory, as is Puerto Rico. As a comparison, Kentucky’s positivity rate is just over 4.5 percent.

The reason the travel advisory is not a mandate, Beshear said, “is because a federal court in Kentucky struck down the last time we had a mandate about not traveling to areas that had significant cases, and said our order needed to be more like Ohio’s, which was an advisory. So, we’re doing the best we can with the tools we have.”

He did issue a mandate on the number of people allowed at social gatherings, such as backyard parties.

“We had increased the amount of people you could have up to 50, and we are reducing that back down to 10. That doesn’t affect any businesses, any venues, any outdoor weddings,” Beshear stated. “They have licenses that give them the motivation to clean and do the right things.”

“Today was the call that the White House does that the Vice President handles, and he talked about the steps they believe are necessary for areas that are hit really hard. Those include reducing restaurant capacity to 25 percent and closing bars. I remember how many of our restaurants can’t operate even at 33 percent. I want to make sure we don’t hit that surge that we have seen in other places, so we don’t have to adopt those White House suggestions. One facility doing the wrong thing can hurt everyone else.”

The one White House suggestion Beshear continues to promote is wearing a mask in public.

Monday’s new cases were less than one-third of Sunday, with 258 reported to state health officials, which brings the total to 23,414. Beshear noted the lower number is because many of the labs are closed on Sunday. “That number will grow some Tuesday, while we’re still catching up, and unfortunately, I expect the number to be much higher by Wednesday or Thursday.”

There was also only one new death on Monday, a 94-year old woman from Casey County. That makes it 671 since Kentucky’s first COVID-19 case was announced on March 16.

The number of tests performed in Kentucky has now reached 533,453. The number of people who have recovered from the virus is 6,876.

Other key updates, actions and information from the Beshear administration on the coronavirus pandemic can be found at kycovid19.ky.gov.

The Governor’s next press briefing will be Tuesday at 4 p.m., EDT.