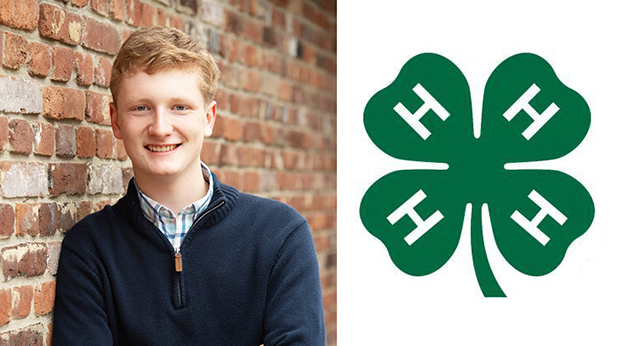 Landry Woodrum, a 2020 Boyle County High School graduate, has been elected as the President of the Kentucky 4-H organization. He is the son of Boyle County 4-H Extension Agent Kim Ragland and Brent Woodrum of Liberty.

As state president, Landry will also be a member of the Kentucky State Fair Board and the Kentucky 4-H Foundation. In addition, he and his administrative team will also be responsible for chairing the State Teen Council, which is the state 4-H’s legislature, and will administer large events such as the State Teen Conference which is held at the University of Kentucky campus every summer, Woodrum said.

However, Woodrum isn’t new to 4-H leadership roles. He’s served as an officer at the county and district levels. “And I have had the opportunity to serve on multiple state and national youth leadership boards,” he said.

During Woodrum’s one-year term, he hopes “to lead the development of at least one major new opportunity for Kentucky 4-H members to practice leadership, such as a new conference or youth leadership board. Our team has already expressed a common interest in that goal, so I have high hopes.”

Woodrum began his 4-H involvement as a 5-year-old who attended 4-H summer camp. “But my involvement greatly intensified in seventh grade when I began participating in leadership programming.”

Over the years Woodrum said, “My experience in 4-H has taught me many life lessons, such as helping me manage my time and responsibilities, or being able to realize when I should step back and let others take the wheel in a group setting.”

He added that 4-H “Has also helped me identify my passions — working with people and the agriculture industry, which was really helpful in picking out my major for this fall at UK.” He will be attending UK’s College of Agriculture, Food and Environment majoring in agriculture economics.

Even though he’s now a high school graduate which is when members become 4-H alumni who serve as volunteers and supporters, he said that state officers are allowed to have their memberships extended beyond age 18.

Woodrum said he’s enjoyed meeting other “friendly and motivated” students. He’s also been given travel opportunities with the club and has matured by building skill sets that will be helpful throughout his career, he said.

“My experience in 4-H has been life changing, and it is my sincere hope that many more youth in Boyle County will continue to participate in this wonderful organization.”

The Danville Police Department is asking for the public’s assistance in the case of a Danville man who was reported... read more