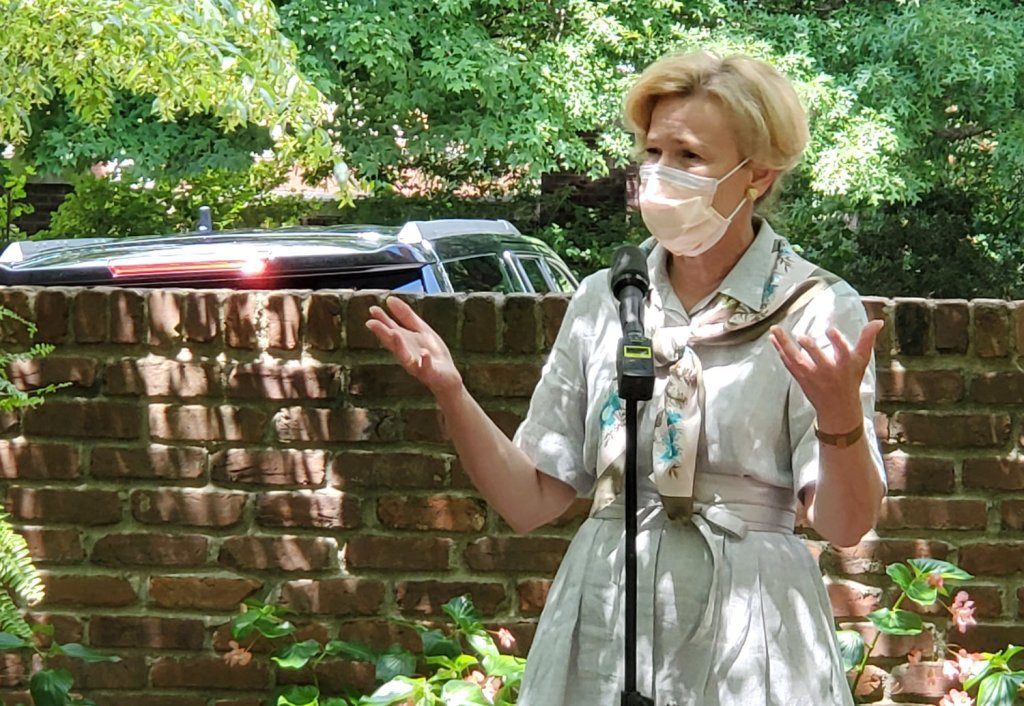 Dr. Deborah Birx speaks with reporters at the garden in the Old Mansion in Frankfort. (Kentucky Today/Tom Latek)

During a press briefing in the garden of the Old Governor’s Mansion, Birx said in addition to Gov. Beshear and Public Health Commissioner Dr. Steven Stack she met with health community, local health officials and the private sector, “to really hear everyone’s concerns, including higher education and K-12 commissioners.”

She called it a “robust discussion,” and what was important to her, “Was the honesty and directness of the discussions, to really understand what we’re seeing in Kentucky, and what the Governor and Public Health Commissioner are seeing; and how we can be helpful to change the current trajectory.”

Dr. Birx says she has been traveling across the United States, starting in the southwest and working from Arizona across the southern tier of states and South Carolina, “Those are the states that are having a very significant epidemic right now.”

She says her current tour which beside Kentucky, includes Indiana, Ohio, Tennessee and Monday in Virginia, “Are the next set of states where we have significant concerns about the rising test positivity rate and the rising number of cases.  It’s due to that, that we wanted to come in person to really discuss what we were seeing and what we think, along with the governors and mayors what they are thinking needs to be done.”

She says their recommendation includes, “100 percent of people should be wearing masks in any indoor public space.  Frankly, people should be wearing masks if they’ve been in an area where the virus is significant.  If they’ve gone on vacation and they come back, they should wear a mask indoors in their home, if they are in a multi-generational household, in order to protect our seniors.”

Closing bars and reducing indoor restaurant capacity are actions Gov. Beshear said Friday he would take, if the numbers don’t decrease this weekend.  So far, they haven’t.

Birx said, “What we’ve seen with this new movement of cases, is young people are often infected first, particularly in the under 30 age group.  Most of them are asymptomatic, and they go on to infect their parents, who then infect the grandparents, who often have significant co-morbidities.”

She said it’s their top priority is to re-open schools this fall, from K-12 through colleges and universities.

“It is going to take all of us self-sacrificing, to wear masks, to make sure that it’s not an issue no matter where we are, she said.  “Each state needs to make that decision school district by school district, to ensure that the virus levels in that school district are low.”

Birx was asked about people who have said that the messages from Washington regarding masks and other aspects of reopening have been inconsistent, leading states to create a hodgepodge of regulations.

She replied, “Could we have been more constantly direct after our reopening guidance was published?  That is part of the reason why the Administration wanted me to come out to states, to have that dialogue directly, Governor by Governor, Health Commissioner by Health Commissioner, private and public sector together to make sure we were all interpreting the guidance in the same way.”

She added, “I can tell you that here, the Governor and health commissioner and the federal government, are on exactly the same sheet of paper.”

She cited evidence gathered which has showed the guidance is working to reduce cases of the coronavirus.  “Place like Arizona, where the Governor did close the bars, did put out a mask mandate for the ‘hot’ counties, did reduce indoor dining, did expand outdoor dining, we’re seeing some plateauing and declining of new cases in Arizona.”

Birx said that given Arizona had test positives in the 20 percent range, a state like Kentucky, where it’s from 5-7 percent, has a real opportunity to get ahead of this.

After Birx spoke to reporters, Beshear told reporters the Trump Administration is highly supportive of the mandatory mask requirement in Kentucky.  “They are also supportive of our reduction of social gatherings to ten people or less.  Our numbers are still going up, so on Monday you can expect us to take some additional steps.”

He wouldn’t say exactly what they will be, but he said on Friday that it would be bar and restaurant restrictions.  “We are also probably going to comment on where we think we are as far as public schools, at that point.”

Beshear noted there is good adherence to wearing masks in retail and at restaurants, “But I’ll tell you what.  I just saw a picture of a couple bars last night in Lexington, that have hundreds of people in them, and none of them are wearing masks.  That’s a problem, and that’s going to require us to take some steps that we don’t want to take.”

“We’re not playing around with the numbers that we’re seeing,” and added, “I don’t think Monday’s announcement is going to be a surprise to anyone.”