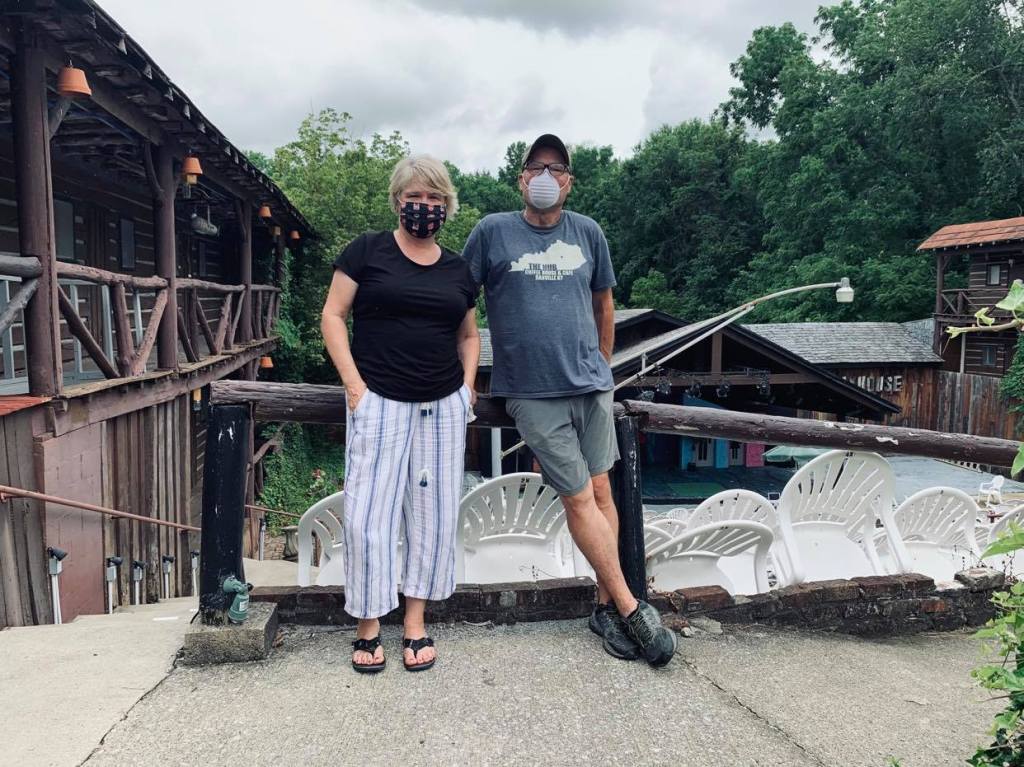 Pioneer Playhouse Managing Director Heather Henson, with brother and Artistic Director Robby Henson say preparing the playhouse to surge on during a pandemic was something they’ve never dealt with before. “But it was important to us, we had to,” Heather says. (Photos by Bobbie Curd)

Pioneer Playhouse may be the only venue around right now actually able to put live theater on — and the Henson Family doesn’t take that for granted. “Broadway still isn’t up and running; we know so many actors out of work …” Heather Henson says, managing director.

The playhouse will be able to put on what would have been its fifth and final production, “Maybe Baby, It’s You,” a modern comedy, which opens Friday.

She and brother Robby, artistic director, took a few minutes’ to talk from a playhouse porch bench on a drizzling Thursday, after the crew’s lunch break.

Their mom and producer, Miss Charlotte, sat at a table off to the side, isolated from the rest of the cast. She’s been well protected, Heather says, and is part of the playhouse’s precious commodities, just like the actors. All actors were tested before they reported to the grounds, and had to be tested again before they moved into their individual trailers. 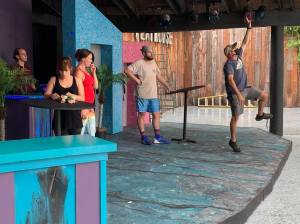 Director Robby Henson shows the cast of “Maybe Baby, It’s You,” a specific dance move to make during a scene.

“We’ve kept everyone sort of isolated out here together, all kind of in a protective bubble,” she says, explaining why actors aren’t allowed to go to stores or other public places.

Heather waves to a photographer from a Lexington newspaper that had just finished taking some stills on the Pioneer Playhouse grounds, interested in doing a follow-up since it may be the only in the state with a set up allowing it to put on live shows.

The 420-seat, outdoor venue has plenty of space for audience members to sprawl, especially with rows removed and extra seats off to the side, including balconies and terraces for those who want to isolate more. But being able to make that happen logistically, along with shaving the cast down from 20 to four to ensure their safety, isn’t  something the family has dealt with before.

“When this first hit in March, we thought that we could cancel one show — we’re outdoors,” Robby says. “But the pandemic was much more serious. We lost our first show, then we decided to lose the second and third show. We lost our forth show, and now we’re coming in with a season that’s just our fifth show.”

They will also host the traditional comedy show weekend Aug. 21-22, and have added a special concert before that as a fundraiser. Local band PowerPlay will perform outside on Aug. 20. The event is free and drinks will be sold, with donation boxes onhand to benefit the playhouse.

Although it’s all new and different for the Hensons — they’ve never canceled a show in the 71 years of Pioneer Playhouse operating — the slower pace has been appreciated, they both say. And with a small cast of four actors, they have bonded quite a bit, Heather says, which makes for special performances, especially for such a physical comedy. The four actors will do their own costuming, scene changes and handle all their own props; they must be in perfect synchronicity with each other. 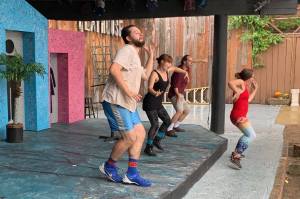 “Everybody we know in New York, and everywhere, who are actors are not working,” she says. “These actors — they keep saying how lucky they feel to be working at all. So it’s kind of a different feeling, I guess.”

The playhouse grounds already had four empty trailers set up for living in, so each cast member has their own quarters and bathroom. “… we’re staying in a bubble,” Heather says and laughs. “We’re protecting them like little eggs.”

Audience members will be required to wear masks upon approaching the box office and until they get to their seats, or when they leave the audience area to go to the bathroom or bar.

Dinners are still available just before the show, but reservations are required. Heather says due to capacity being cut and procedures added for patron safety, dinners will probably fill up soon.

“We’re losing the playhouse tradition of never letting the rain stop us,” Robby says, because they can usually take to the stage inside. But they don’t feel comfortable with that. “We just feel like it’s safer outside. This is about as safe of a public event you can go to, without going to the woods.”

“It kinda is the woods out here,” Heather says; they always tell funny stories about dealing with the unpredictable outdoor environment.

Robby laughs. “You know, oftentimes, what makes us so well suited to deal with the pandemic — it was something I was complaining about. Like ‘damn those bugs and crickets, damn that rain and why can’t we be a blackbox theater.’”

But what makes Pioneer Playhouse special, Robby says, “doing outdoor theater, and in a rustic surrounding, where we can house actors individually. That’s a silver-lining; it makes us suited for doing this.”

And yes, Heather says, part of it is just pure Henson determination. “We couldn’t imagine just not doing it. We heard Stephen Foster (theater venue in Bardstown) is going to shudder for the whole summer. And theaters like Barter Theater in Virginia, which we look to a lot for what we do — they’re shuddered.” 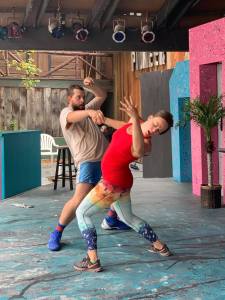 All decisions they totally respect, they say; they feel very lucky to be able to offer what they are. They could’ve shuddered, Heather says, “but we feel like we’re unique because we’re outdoors. It’s a big space.” But, since all others are closed, and there were no specific guidelines released by the governor’s office about live theater — only for “venues” — they didn’t have anyone else to turn to, get some advice on exactly how and what to do.

“We’re kind of used to that …” Heather says. “I mean, the playhouse and the Hensons …”

“Came into existence without a plan,” Robby says. “Our father (Col. Eben Henson) was like, ‘OK, let’s put up a board,’ and started nailing it, and ‘I’ll think what this is going to be later.’”

Heather says, “That was his motto. .. We’re lucky in that it’s a family, we didn’t have to go through a board. It’s just me, Robby and Mom making decisions, and we said, ‘hey, we’re going to do this.’”

The learning curve included a crash course in disinfectants, how often to clean the bathrooms and where masks must be worn. An employee with the health department consulted with them on how best to set up the outside dining area, and other things they could do to help with patron safety.

“They actually submitted a plan to the governor’s office over a month ago … and received back the go-ahead to open with modifications,” says Brent Blevins, Boyle County’s public health director. He says the environmental staff go anywhere that has a food permit and work with them on how to safely be open, including regular and follow-up visits, depending on what the governor has in place.

Blevins says, “They are fortunate in that they are outside and are able to use this to their advantage.”

Robby says for their opening production, they’d normally have about 200 reservations by now; last week when we spoke, they had about 80. “Our actors feel like — if you get a chance to act and there’s 70 people in the audience, thumbs up,” Robby says, then excuses himself to bolt off to rehearsals through the now-pouring rain. 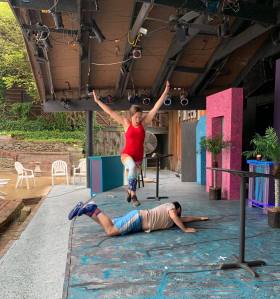 Erika Lee Sengstack is an actor based out of New York and in her sixth year of performing for the playhouse. On her way back down to rehearsal, she says she made the decision during the pandemic to leave New York to eventually move closer to family in California. She’ll be quarantining and doing that safely, but she says it just made more sense to spend some time with her family, since all theaters are shut down.

And she grabs her chest when she talks about how she got the opportunity to rejoin the playhouse, saying how amazing the experience has been.

“My greatest hope is that people will find refuge in entertainment and come enjoy this and recognize what a special opportunity it is,” Erika says. “We don’t know when we’re going to see live theater again.”

She says she is grateful for the opportunity to work, “because there are millions of actors out there right now who are not.” And she knows many of them, “people in New York, who are literally saying, ‘my career is over, what am I going to do now.’”

Of course she hopes for a great turnout, but she also hopes “everyone is really COVID-conscious, and really respectful about the masks … Be safe, use sanitizer, wash your hands.”

Erika zooms down the stone steps to the stage and joins actors Adian Chapman, Silas Walsh and Centre College grad Jessa DeLuca in a high energy, physically-demanding dance scene to “Maybe Baby, It’s You.” It’s easy to see they’ve found a groove together — their physical comedy plays off one another pretty seamlessly. 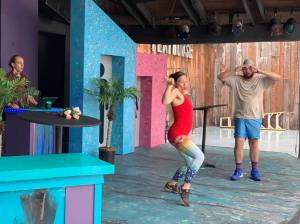 “When we made the decision to do this, we thought there may be 10 people in the audience. There might be 50, or 100. We really don’t know,” Heather says, after we laugh through what we just watched. We relate to how much we needed that laugh, which is why it was important to the family to find a way to put something on.

“We want to do this for the community; I think we all need something to look forward to.”