Wilt steps off library board after 35 years 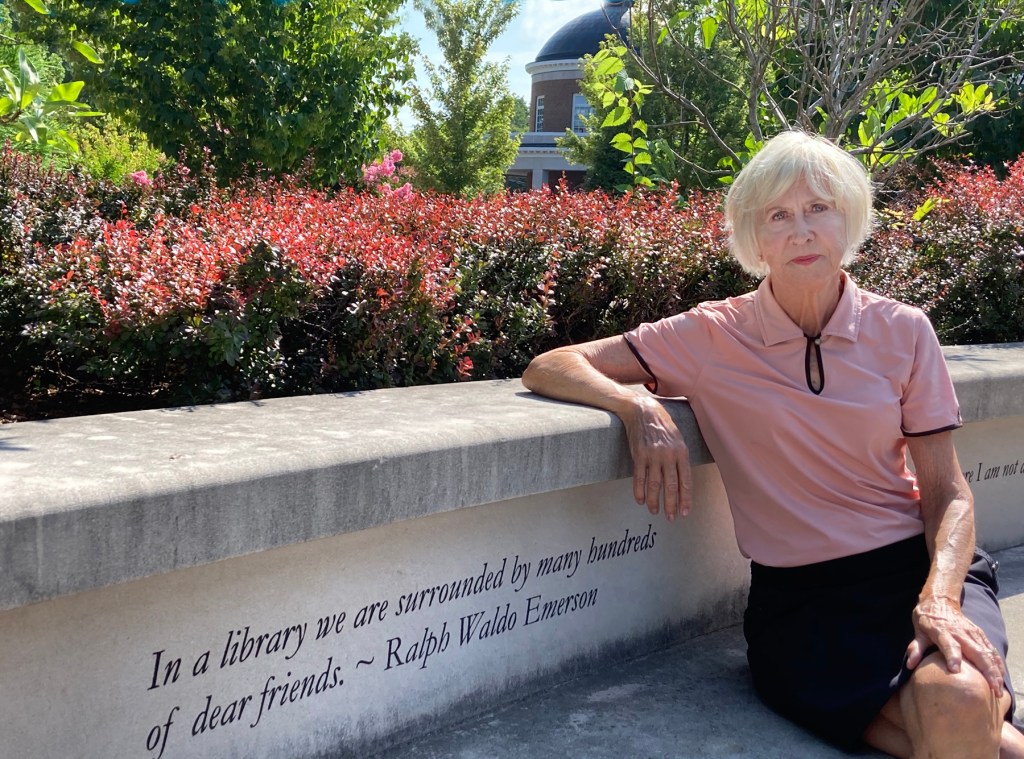 Betsy Wilt has stepped down from the Boyle County Public Library Board after serving for 35 years, and 15 years as president. One of most enjoyable tasks was researching and deciding on what famous quotes to have carved into the backs of the benches at the Carl Benson Library Park. (Photo by Robin Hart)

When visitors pass by the Boyle County Public Library they can’t help but notice the large domed rotunda and outdoor reading areas with a fountain and charming statues tucked behind trees and shrubs at the corner of Fourth and Broadway. On Third Street the original library building and an adjacent historical home that’s been incorporated into the library blend into the neighborhood.

And Betsy Wilt, who stepped off of the library board in June after serving for 35 years, with 17 years as president, was instrumental in raising funds to make the library expansions and remodeling possible.

“I can look back and see the various states, via my positions on the board,” Wilt said, while sitting in one of the quiet second floor meeting rooms.

“I have very mixed feelings about leaving,” But she will definitely continue using the library as a patron.

Being on the board for so many years, Wilt said “It was a labor of love, that’s for sure.” She also quickly pointed out that “there were so many people who were involved and generous and who supported,” the library during several renovations and expansions over the years. “It was a nice endeavor. It was rewarding.”

Leaving her position on the board, “It’s a mixed blessing. It’s been a part of me for so long,” Wilt said.

One development that she’s witnessed was how the library adapted to the use of computers. “Carl Benson (former library director) was at the forefront of that. …. He knew that computers were going to be important. He didn’t know how, none of us did,” Wilt said.

She said the first step in the 1990s was to computerize the card catalog. “I didn’t like that at all,” she said. “But those computers can do a lot more research than I could with a card catalog,” which she now appreciates.

Up until around 2005, and even as late as 2010, Wilt said people traveling through town could stop at the library to check their emails.

Wilt said she enjoyed being on the library board because “I’ve always loved libraries. I have fond memories of going through the stacks and browsing around,” at the old Lexington Public Library.

“I’ve always loved books and I acquired a lot of books and at one point I realized, ‘I don’t need to own all these books, when you can go check them out at the library.”

Wilt said when she stepped on the board in 1985, they were in the planning stages of the first expansion. “But I helped with interior decisions, like paint colors.”

“When that facility was planned we thought it would last 20 years, but by the mid 90s, less than 10 years, we were outgrowing the facility.”

She added, “I am proud of outgrowing it so quickly.”

In 1999 the library began acquiring surrounding properties, including the First Baptist Church building, which allowed the library to triple its expansion size, she said.

“It also tripled the size of the money that we thought we’d have to need. I remember being overwhelmed, thinking we might need to raise a million dollars. We ended up raising about three million dollars.”

There were many board members working hard to raise the needed funding she said. “We had money from city, county, state and federal. And even more important to me, we had a lot of private money. The community responded beautifully.”

Since moving into the current location in 2010, Director Georgia de Araujo has been working to expand the staff and library programs, Wilt said, which she isn’t much involved in.

Planning expansion and raising money for them was her main focus, she said. But she doesn’t have a formal background in business. “I’m a retired French teacher.”

“I learned two things about fundraising. Number 1: People have to be asked. And number 2; they have to be thanked. It’s as simple as that. And that takes some direct communications.”

Wilt said because COVID-19 has kept people away and out of the library for so long, “I think next year will be challenging.”

Since about 2012, the library has averaged between 400 and 500 people a day using its services.

“What I see is the challenge of the next year, because of COVID, we’ve got to get those people back in the library. We have to restore it for what it was before so they can start building again.”

One of her favorite and most enjoyable tasks as president was when she was researching for quotations to be carved into the backs of the stone benches at the Carl Benson Library Park.

And computers helped her with the task. “I did Google searches. And what would I have done without googling? I would have been at the Bartlett’s Familiar Quotations (book) I guess.”

Wilt said she’s enjoyed working with everyone on the library board for the past 35 years. “The board has been an active board and good boards are active boards. … It’s been a pleasure working with them.”

She also cherishes comments from people who tell her they took their out-of-town visitors to see the library, and they are impressed not only how beautiful it is, but all of the services it provides. “That makes my heart feel good every time I hear that. It makes me feel good.”