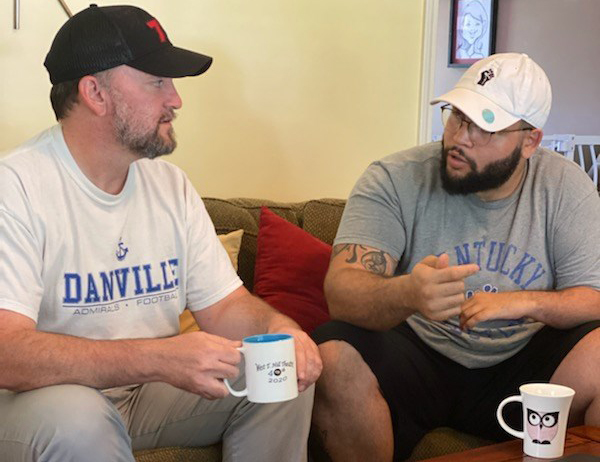 Chuck Taylor, left, and Elliott Porter discuss their next interview subject recently before filming one of the “African-American Experience in Kentucky” segments. They say the video series is a way to share stories from the black community, hopefully encouraging more understanding and dialogue. (Photo submitted)

Chuck Taylor had a unique reaction to the Black Lives Matter movement. He says that a few weeks ago, when everything began nationally, and locally with the United for Change — Danville group, “I thought we could interview some local folks in the black community, to share their experiences.”

So he reached out to Elliott Porter, someone who has been active and vocal in peaceful protests. “I thought, let’s just start with you,” Taylor says about Porter, who was the first interview.

After Porter was game to make other connections to people with stories, the two joined up to create “African-American Experience in Kentucky,” a web series they post on their YouTube channel and Facebook page. So far, they’ve completed and posted four interviews with community members, ranging in ages and backgrounds.

Porter said he has been hitting up people “who are recognizable faces and names, people who have some sort of impact or influence in the community, or on me, personally — teachers, coaches, business owners …” To him, it’s important to “try to make that connection with everyone, letting everybody know their side of the story. From all aspects, not just the racial aspect.”

“For me, it was important to put this out there for people to see, to learn from,” Taylor said, adding that some of the subjects may be “people you may never encounter” and get the opportunity to talk to.

“I’m a middle-aged white guy, so my experience is different,” Taylor said. He said he learned a lot from Mildred Porter’s interview, who is Porter’s grandmother. “That was really cool, getting her perspective on living through the Jim Crow era. I didn’t hear those stories growing up.”

During the interviews, Porter converses with the subjects while Taylor films and then edits the clips down. He said he probably spends about eight hours editing each piece, which are usually about 15 to 20 minutes long.

But all the work is worth it, they both say, to get positive conversations started in these very tense times.

“The pandemic didn’t play into it for me,” Taylor said, as far as taking the subject on. “BLM did. You know, a lot of people put stuff on social media, and they only know their experiences. They’re not open, or don’t know how to understand there may be other perspectives. And to see someone they’ve known all their lives, but may not have known how they grew up and what they’ve gone through, could be very powerful.”

Porter hopes the videos get as many eyes on them as possible. “Just because there’s a lot of people who need to see them for different reasons. A lot of these stories are uplifting and make you feel good. But there is some hard stuff that people are willing to discuss.” He said it’s important to go into the interview open-minded, not focused on a certain angle.

Taylor said, “If you can change some minds and change some hearts, that’s the way to go … Try to show that we can all be inclusive, watch it and learn about people. … Just because you think things are a certain way, doesn’t mean it’s that way for everybody.”

He said hopefully they will accumulate a nice historical record, and plan to do a recap in about a year — something that can be saved forever.

“We have all these interviews … we can put a bunch together and say here’s what 30 people from the African American community thought in Danville in 2020 …” Taylor said.

Porter said most of the views of each video are at about 2,000, which he was blown away with. He said during the first few months of the pandemic, “everybody was talking about ‘Tiger King,’ and it went viral. I thought we could kind of take what we’re doing and get it to that level of exposure — something that’s actually positive and something that can spark so much change, and get it on a platform like that would be amazing. So I hope it gets bigger.”

They’ve got a waiting list of about 25 or more people who they plan to interview. When people would wrap up their segment with them, Porter said, “they’d give us suggestions, like ‘if you think what I’ve been through is interesting, you should hear this person’s story.’”

Porter, 25, is a Danville graduate and ended up teaching there for two years. He’s currently going back to school to get his masters in human services and counseling, and plans to work in direct care for individuals with developmental disabilities.

Taylor, who will be 48 this year, has always been involved with theater, whether it’s an acting, directing or technical gig. He said he wanted to join forces with Porter because “he’s got a lot of drive and motivation. He’s out in the community, has his finger on what’s going on. It made sense to me.”

The two had never “hung out together,” but have known each other forever — Porter is the son of a close friend of Taylor’s.

“Chuck’s awesome, and I’m not just saying that because he’s sitting right here,” Porter said. “I always heard my dad (Mark Porter) talk about their friendship and they got a total bromance going on.”

Porter said he gets a lot of his personality traits from his dad. “A lot of things I’m interested in now are because of my dad’s influence. Since he and Chuck are such good friends, it was an easy transition for me, as far as that.”

He added that he’s known as an “old soul, but I still watch cartoons in my underwear.”

Taylor laughed. “That’s probably why we get along.”

Representatives from the United For Change-Danville group appeared before the Danville City Commission Monday evening to present a document outlining... read more