Only the lonely: Senior adults miss being part of church services 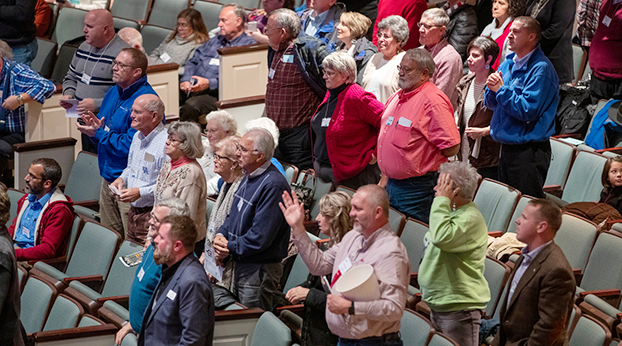 Senior adults, who make up a large portion of Kentucky Baptist churches, are dealing with not only the coronavirus but some of its residual effects.

One of the biggest is loneliness. Church was often the lifeline for them and an outlet for social activity. But being in the most vulnerable category toward contracting the coronavirus, that outlet has been shut out for them.

They miss the hugs, the handshakes and the hallelujahs.

Dr. Todd Gray, executive director-treasurer of the Kentucky Baptist Convention, said Kentucky Baptist pastors have stepped up in a big way in keeping their most senior members engaged during a pandemic that has put them at risk.

“I have heard numerous stories over the past four months of how Kentucky Baptist pastors have gone the extra mile in ministering personally, and through organized caring efforts, to the most senior members of their congregations,” he said. “From Pastor Matt Shamblin at Rose Hill discovering how to best deliver sermon content to this group, to Pastor Steve Hussung making socially distanced front porch visits, to Pastor Charles Frazier delivering meals, to Pastor Dan Summerlin organizing the church leaders to reach out to every senior adult on their role. These are merely representative examples of what I have seen every Kentucky Baptist pastor doing, caring for the flock and caring especially well for their oldest members.”

Pastors have reached out to their older community in a lot of different ways including phone calls, social distanced visits, meals and even “caroling” in the summertime.

But for these senior adults, there’s nothing like being in church.

Some have returned to church wearing masks and avoiding close contact with friends despite the risks. Unable to find spiritual sustenance or the comforts of the church community, others are isolated and lonely and sinking into depression.

Alva Boggs, 87, and her husband, Fred, 90, haven’t been to their church, Unity Baptist in Ashland, since the first week of March. They have stayed safe and secure at home and Alva said it’s not just for their own good, but their family, too.

“Our age has a lot to do with it since we’re in a very high risk,” she said. “As far as Fred and I go, we’ve lived a long prosperous life and the Lord has blessed us. But we don’t want to be a hardship for our family. We would have to have care if one of us got it and our family would have to care for us.”

She said they have coped by using technology, watching the services online every Sunday and keeping up with the church happenings through the pastor’s daily chats and Wednesday night devotionals. “But it’s not like going to church and seeing your family and friends,” she said. “If not for our family, it’d be terrible.”

Fred turned 90 since COVID-19 became part of the nation’s vocabulary and the church honored him with a parade of more than 50 cars driving past the house and waving. He called it his best birthday ever.

Alva’s daughter is her Sunday School teacher and she prepares a detailed Sunday School lesson that is emailed or  mailed to her students.

“I go to Sunday School every (Sunday) morning with lessons and go through the lesson as if I were there in person,” Alva said. “We’ve missed church and missed seeing our church family.”

Julia Vencill is one of those friends and a widow who lives by herself.

“Of course, I will admit, like anybody, it’s lonely,” she said. “I miss going to worship, especially since I live alone. The main way I cope with it is my devotions and those type of things. I have a real good Christian friend named Alva Boggs who has helped me so much through this. I would think that sometimes I help her too.”

Julia has a niece and her husband who help provide for her as well and the church deacons or staff check in sometimes as well, she said.

“The main way I have been coping with this is being able to spend more time in God’s word and my Christian friends who have been so faithful,” she said.

Vencill is also in her friend’s Sunday School class and uses the teacher’s mailed lessons as a tool for studying on Sunday mornings.

When churches first restarted, they took reservations because of capacity restrictions that were enacted.

“I never thought I’d live to see the day where I had to have a reservation to go to church,” Vencill said.

With most of the Kentucky Baptist churches restarted, pastors and church leaders are doing everything they can to protect their oldest and most precious commodity – the senior adult.

“It’s been really hard for them, probably more so than others,” said Jeremy Couture, the pastor of Unity Baptist Church. “Churches should pay close attention. There’s spiritual evidence in James when it says to care for the widows and care for the orphans. That’s two groups of people who have heightened needs.”

Technology has helped some

When churches were shut down because of the pandemic, most turned to technology to have services. But senior adults didn’t always have the technical know-how although many have proven to themselves that they can do it. From Zoom to Facebook, the older generation have become better than novices in a technical world that has now become their link to church.

Facebook pages for those over the age of 65 have popped up in much bigger numbers and Zoom classes have brought some friendly faces into their homes if nothing else.

In addition to streaming services, options for churches could include conference calls accessible to members who either don’t have internet access or aren’t tech-savvy. Others have provided equipment, like tablets, and shown the senior adults how to use them.

But nothing replaces the feeling of sitting in a church service and senior adults are missing it.

Ministering to that age group has become an opportunity to mobilize the church in a new way. Increased communication among church members – and to those who are in need – is important. Members have to be intentional and consistent about reaching out to senior adults.

“The church is a real vital part of the community, especially for those senior adults whose spouse has passed away,” Couture said. “They’re really at risk for feeling isolated. Some have friends and more have family.”

Couture said he has a list of widows and widowers that he tries to routinely call each week as the pandemic moves on day by day.

Back in the spring, Couture organized a group of church members to go “caroling” to the church’s senior adults. They knocked on the door and stepped back and sang hymns, instead of Christmas carols, back in May. The reunion with senior adult members was precious he said, with many tears being shed.

“It was a way to show them that we cared for them and we remembered them,” he said. “Everybody seemed to enjoy it, including the carolers.”

Senior adults are often the biggest givers in church as well and many of them continue to faithfully tithe to their churches either through mail or by dropping their envelope off at the church office’s mail slots. It gives them a way to feel engaged in their churches and Kentucky Baptist churches, by and large, have done better than expected financially during the pandemic. The older members are a big part of the reason why.

Jay Hatfield, the pastor of Willsburg Baptist Church in Springfield, says their church has provided meals to senior adults during the pandemic.

“We have different groups within the church – the Acteens, Mission Friends, RA’s and GA’s – who have helped us with taking meals,” he said. “We will drop them off on the porch to make sure we’re following social distancing guidelines. That lets them know we’re thinking of them.”

Hatfield said he has another church member who regularly sends out handwritten notes, which has become a treasure for those who are isolated at home. Knowing someone is thinking about you brings comfort, he said.

“Some of our seniors are scared and some have spouses who are seriously ill and don’t feel comfortable leaving them for church,” he said. “There’s a lot of different situations.”

Older Americans also are among the most likely to develop a severe case of COVID-19. Eight out of 10 coronavirus deaths reported in the United States have been among adults 65 years and older, according to the Centers for Disease Control.

Many older people may not see the inside of a church for a very long time.

Older Americans were nearly twice as likely as younger Americans to attend church before the shutdowns, according to studies. A recent Pew Research survey found 61 percent of those born before 1945 (the so-called Silent Generation) attended religious services monthly or more, compared with 35 percent of Millennials (born between 1981 and 1996).

Many congregational ministries, Buchanan said, focus on only one or two of those groups.

June Rice, 94, of Louisville taught Sunday School for 60 years before “retiring” earlier this year. She had settled into a new class as a student for only about four weeks when  the coronavirus shut down churches.

Rice resides in an assisted living apartment where she said she feels isolated “like I’m in jail.”

Her Sunday School teacher sends weekly assignemnts, she said, which helps and her children call her every day. A daughter who lives locally takes her to doctors appointments.

While the Sunday School updates are nice, she said, “I can read my Bible and I do. I read it every day and have a long prayer list.”

However, the outgoing senior adult craves the personal interaction. She has 1,700 Facebook friends and has a birthday coming up on Aug. 13. Last year she received 168 Happy Birthday messages from friends.

Her birthday wish this year?

“For the nation to unite insted of being so divided,” she said. “We seem to have to hate the person who does not agree with us. I guess that would be my ultimate wish: that we could agree to disagree and still remain friends.”

Ag Commissioner sounds alarm about seeds being sent in…