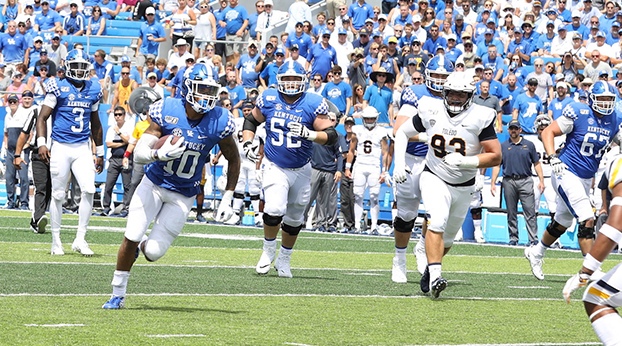 Kentucky running back A.J. Rose could be UK's starter but with 10 SEC games a deep running back group could be a God-send for UK. (Vicky Graff Photo) 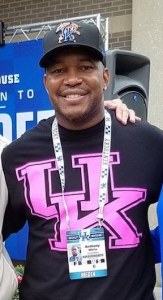 How often have you heard that an eight-game Southeastern Conference schedule is a grind for every league team and how welcome the bye weeks are to let players heal during conference play?

If you are a Kentucky fan, you’ve heard it a lot. But it is also something national media members often pick up on from other SEC coaches.

Now that the SEC is going to a 10-game, conference only schedule due to COVID-19.

How hard will that be on Kentucky?

“I would have been a lot more concerned five years ago,” former UK all-SEC running back Anthony White said. “Now we’ve got depth. We have guys to rotate in there. We are deep enough now where there is not a huge drop in production when we bring guys in.

“It’s also a lot mental not just for players but for coaches to stay with the plan about not overusing a guy. Load management schedule is going to be important. You may go into games wanting to play a guy just 30 or 40 plays so he can survive the season.”

White can still remember even when he played if there was a major SEC opponent waiting a week after UK was going to play a non-conference team it should beat the attitude was more just get the game over.

“But you also have to remember that kids trying to make a name for themselves don’t want to come out of games and won’t tell you they are tired,” White said. “That’s why it will be on the coaches to monitor that with 10 SEC games.

White also believes the rule where a player can play four games and not lose a redshirt season could dramatically help UK this season.

“That’s big, especially in the defensive front and secondary. You can play some young guys a little bit to get them some reps but also use that to help with load management with some of your older guys,” White said. “And it helps when you have talented freshmen like Kentucky has now.”

White says it’s hard to explain the toll physically playing a top tier SEC team can take on a player.

“Even if you do beat a Alabama or LSU, the injuries and physical play takes a toll on your team,” White said. “If you are not out there playing every week, it’s easy to discount that players are going to be hurting every week even if they win and be limping out of the stadium. The SEC can do that to you.”

He has no problem with the SEC delaying the start of play until Sept. 26 — three weeks later than teams were originally scheduled to play. That’s two weeks after high school football games will start in Kentucky as of now.

“Everybody wants to see games played and nothing really surprises me about this year,” White said. “That later start could turn out to be advantageous to us or it could set us back. But in these times any change you make to get football back, you can’t complain too much about it.  This later start also gives you  more time to acclimate to having regular students back (on campus) too.”

He’s more upset that UK will not play Louisville because of the memories he has from playing in that rivalry and also watching UK-Louisville games since he graduated.

“Under the circumstances, I understand it and why they are not playing. But memories you get from those Kentucky-Louisville games stand out to me more than ones from playing Alabama or LSU,” White said.