Question: Hey Jerry, what gives with this? Help me! My aunt gave me her collection of this orange Fire King. I thought alright cha ching. She said I could sell it and use the money for a trip this fall.

It’s a service for 12 with extra pieces and lots of serving pieces, some doubles. I’ve taken it to three stores and no one was interested. I  put it on Craig’s List and someone offered $100 for the whole set!

I spent a couple of hours adding it all up on eBay. This is close to a thousand bucks of glassware. I thought Martha Stuart made this stuff go through the roof. Am I mistaken? Thanks for helping me. 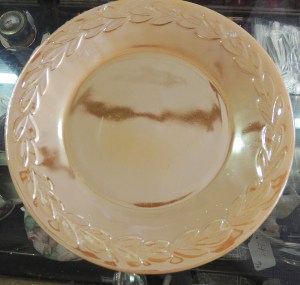 Answer: OK, here’s the deal. You are mistaken. People just never have taken to the Peach Lustre by Fire King. I’ve always thought it was the color. It’s not cool and elegant like the jadite or the sapphire blue, nor is it happy and bright like the gay fad, or even the decaled milk glass pieces. It may have had its day once, but that is long gone.

Fire King is a line that was created by Anchor Hocking. This peach or marigold, as some scholars call it, dates to the 1960s. The pattern that you have is Laurel. It’s the most popular in this golden peachy line, but that ain’t saying much.

All patterns in this color line are very common, even with labels and original boxes.

What Ms. Stewart did for jadite, the jade green colored ware, also by Fire King, she did not or

could not do, with the peach line. Frankly, a lot of jadite has softened over the past five years. But not for the really rare or collectible pieces. Those pieces are still in demand and can fetch hundreds. I’ve spotted over the years, several collectors, dealers and price guides and eBay listings touting the rarity, beauty, collectability of peach lustre. It falls on my deaf ears because I know in the real world, that it’s a tough sell, really tough.

I’ve seen it priced for as low as $1 a piece. It’s nice that you have such a large set. However, in this case that might be a hindrance. Unless it’s really popular, people just don’t want large sets anymore.

You may have to rethink your vacation spending money. I would have taken the $100 offer on it

from Craig’s List. That is pretty much about what it’s worth.

Next time, look under the completed auctions on eBay and see what peach lustre is selling for, and not a repeat listing from a collector trying to recoup some money. I would try to market it by selling it in parcels – say six dinner plates or four cups and saucers. Don’t let someone just pick random pieces, as then you have a picked over or incomplete set.

You can always keep it and use it. Just don’t put it in the dishwasher, it ruins the sprayed on finish. Thanks for a great question. Hope this helps.