Ky. State Fair to be limited to participants only, governor says 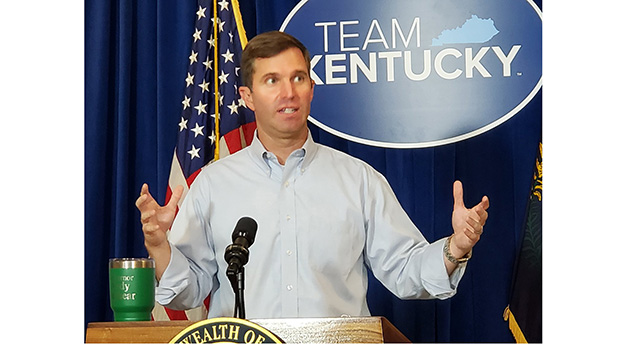 Gov. Andy Beshear announced on Thursday that the Kentucky State Fair, taking place later this month, will be greatly scaled back with attendance limited to participants, due to the coronavirus pandemic.

During a Capitol press conference, the governor said, “Through consultations with public health officials, the Fair Board determined that limiting the fair to participants, was a necessary step to prevent a surge in COVID-19 cases.  This is something the Fair Board came to, understanding it’s their responsibility to protecting Kentuckians, to create a safe atmosphere for everyone, and it’s a decision that I fully support.”

Beshear added: “In an effort to manage crowds and social distancing, Lot A exhibits, midway concerts, entertainment and food vendors will not be featured in this year’s fair.”

Kentucky State Fair Board Chairman Steve Wilson appeared with the governor and said, “We are going to require face masks, we will require employees who are handling cash payments to wear gloves and only credentialed participants will be allowed in Freedom Hall and Broadbent Arena.”

Beshear also announced Thursday the facial covering mandate will be extended for another 30 days.  “It’s working, and since we made it mandatory, more people are wearing them.  We have had fewer cases this week through Thursday, than we did last week.”

He said the mandate will be extended 30 days at a time.  “This is saving lives, saving our economy, and we hope will get us in a position to get our kids back in school.”

In addition to these announcements, the governor also said he would have new guidance in place on Monday for bars and restaurants.  “While it hasn’t been fully finalized, expectations ought to be that restaurant capacity will be increased to 50%, but there will be some changes.  Certainly, at restaurants, we still need people to prioritize outdoor seating.”

As for bars, he says they can expect an enforced seat rule.  “You go to a bar, expect to have a seat, expect to sit in it, expect not to get out of it, unless you are going to the restroom.  All the service and the orders need to be at a table.”

While this will be a new experience, Beshear admits, “But this is about the only way that we think we can do it and do it safely, at the moment.”

There will also be a curfew at bars and restaurants where the last items can be served at 10:00 p. m. but people will be given an hour to consume them.

A total of 516 new cases of the coronavirus were reported to state health officials on Thursday, 12 of which were from children ages five and under.  The case total in Kentucky has now reached 33,254.

“We appear to not just be slowing, but we hope stopping any escalation that we’ve seen,” Beshear said.  “It’s further evidence that wearing that facial covering is truly helping Kentucky in so many different ways: our people, our economy, our kids.  So, let’s keep it up.  I believe that if we continue to do this, we can see even better numbers than what we have now.”

“We’ve had major wars that we’ve gone through, at least in the last 40 years, where we’ve lost fewer Kentuckians than those who we’re going to lose to COVID-19,” he said. “So, let’s remember that just because we don’t see numbers like New York had or Florida is going to experience, that doesn’t mean this isn’t hitting Kentucky really hard.”

More information on the Beshear administration’s response to the coronavirus pandemic can be found at kycovid19.ky.gov.

The governor says his next press briefing will by Monday at 4 p. m. EDT.