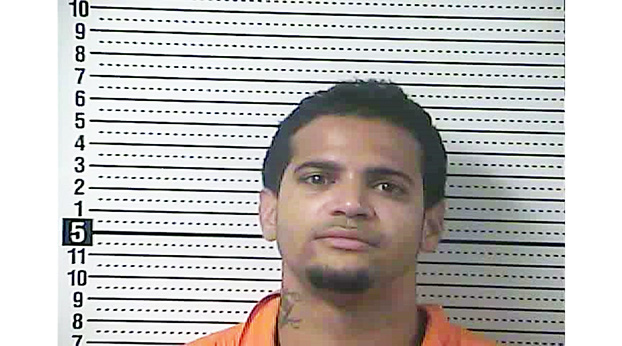 Danville Police Sgt. Chase Broach observed a vehicle driving on Holiday Drive Sunday afternoon around 4:40 p.m.
Broach observed the operator, Christopher Lee Harlan, 29, of Danville, who had several warrants for his arrest, according to a report from the Danville Police Department. Broach attempted to conduct a traffic stop as Harlan pulled into a driveway and quickly exited his vehicle. Broach also exited his police car and called Harlan by name, ordering him to stop and advising him that he was under arrest for his warrants. Harlan refused and attempted to flee from Broach, but he fell to the ground. Harlan then attempted to get up and flee while frantically reaching toward the waistband of his pants, prompting Broach to deploy his Taser, which was effective in allowing Broach to grab Harlan and attempt to take him into custody.
Harlan continued to resist, and a brief struggle ensued, with Harlan escaping and fleeing on foot as he broke free from Broach and the Taser barbs. Broach chased Harlan toward Comp Care located on High Street, according to the report. During the chase, Broach was able to reload the Taser with another cartridge as he chased Harlan into a tree-lined area between Swope Drive and the Comp Care parking lot.
As Harlan went into the tree line, Broach deployed a second Taser cartridge, which was again effective. With Broach believing Harlan was compliant, he moved in to attempt to handcuff him. When doing so, Harlan again became non-compliant and engaged in another struggle with Broach, and Harlan took control of the officer’s Taser. Broach disengaged from the struggle and deployed his pepper spray onto Harlan, who stood up and pointed the Taser at Broach, pulling the trigger. The Taser would not fire due to both cartridges being used, and Harlan again fled on foot. Broach notified backup units of the confrontation and alerted responding officers that Harlan had his Taser.
More officers arrived on the scene, and Harlan was confronted by Danville Police Officer Keith Addison, who ordered him to stop. Harlan, however, continued to flee around the east side of the Comp Care building with Addison giving chase. Harlan then turned around and pointed the weapon at Addison, still refusing to drop the weapon. With his other hand, Harlan again reached for his waistband.
As officers confronted him, Harlan put the weapon to his side and he was taken into custody as officers grabbed him. He continued to fight with officers, attempting to escape their grasps. After several minutes of resisting police, Harlan was finally able to be handcuffed and taken into custody.
After being checked by Boyle County EMS, Harlan was determined to have sustained no injuries. He was decontaminated by Danville City Fire due to pepper spray exposure. No police officers were injured as a result of Harlan’s actions.
Harlan was taken into custody and lodged in the Boyle County Detention Center and charged with operating on suspended/revoked license; fleeing/evading police 1st degree (on foot); resisting arrest; disarming a peace officer; receiving stolen property under $10,000; wanton endangerment 2nd degree (police officer) 2 counts; disorderly conduct 2nd degree; and multiple warrants of arrest. He is being held on $10,00 bond.