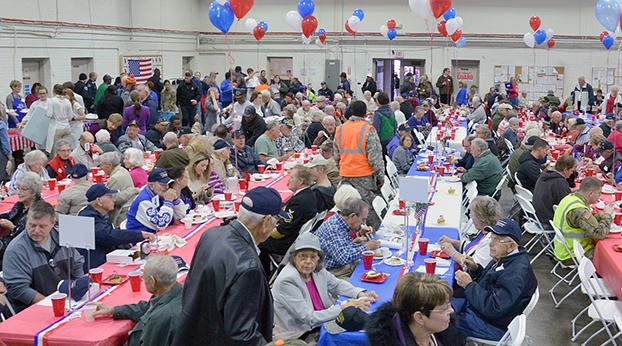 The 13th annual Heritage Hospice Inc. Veterans Day Appreciation luncheon has been cancelled due to concerns involving the COVID-19 pandemic.

Even though it wasn’t scheduled until Veterans Day in November, the planning committee decided last week to cancel the event, which brings in more than 1,000 veterans and family members not only from Boyle County, but Lincoln, Garrard and Mercer counties, as well.

“It pains us all to have to make this decision, but for safety, we felt it was our only choice,” committee member Jack Hendricks wrote in an email.

“We felt we couldn’t in good conscience bring a thousand plus veterans together during this period of uncertainty and risk losing any of them.”

In an interview, Hendricks said he and the dozens of volunteers “love” honoring the local veterans at the event which is normally held at the National Guard Armory in Danville.

But this year it was just too risky to go forward with planning and putting on the appreciation luncheon, Hendricks said. “If just one of our veterans got sick or we lost one veteran,” who contracted the illness at the event, where hundreds of people sit shoulder to shoulder and talk about days gone by, “we’d be really upset.”

Planning the event was going to be a challenge as well with too many unknowns, such as if the armory would even be open for the public’s use in November, Hendricks said.

It takes at least three months to plan the popular event by collecting donations, contacting volunteers, and making sure everything is in place to honor the veterans properly, he said.

Sharon Martin, community provider liaison for Heritage Hospice and Veterans Appreciation Luncheon committee member said, “It was a heartbreaking decision after having the event for the last 12 years but the safety of the veterans, volunteers and committee were front and center of the decision. It was a unanimous decision that was made by the Heritage Hospice Veterans Day Committee to cancel the event and start focusing on making the 2021 better than ever.”

She added that all donations already given for this year will “just roll into next year’s event.”

Hendricks added, “We will pick up next year and make it bigger and better, if that’s possible.”

Hendricks said the committee looked at altering the luncheon and turning it into an event where veterans could just drive through the designated location and pick up their meal. “But a drive-through wouldn’t do it justice,” he said.

The veterans appreciation event “is about comradery. They sit and talk and see their buddy,” some who they only visit with once a year, Hendricks said.

“It is disappointing, but Heritage Hospice honors veterans all year. Thanks so much to all those who love and support this event yearly.”