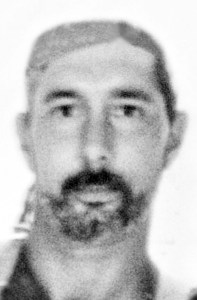 Ross William “Sump” McQuerry, ll a native of Junction City, passed away at home on August 7, 2020. He was a beloved son, grandson, brother, and uncle.

He is survived by his Mother, Ann Ursprung, his Grandmother Sarah York, his Sister Lisa (Roger) Lique, a stepsister Tonya Ursprung and stepbrother Jonathon “Bub” Ursprung. He is also survived by his beloved Nieces and Nephews: Tiffany and Leigh Ann Compton, Brice Lique, Jonah, Katie and Zoe Ursprung along with many dear friends and “adopted” Nieces and Nephews who grew up hearing the legendary stories of his childhood exploits.

His early years were spent riding along on plumbing service calls with his father Ross William McQuerry, l who predeceased him.

Sump loved his family, his beloved cat Mumford Winston V, and his friends. He enjoyed fishing, hunting, Hee Haw, Andy Griffith, cooking and gatherings of family and friends. He was always the life of the party with a joke for every occasion.

He remembered birthdays and phone numbers without help from Facebook or any other digital reminder. He knew your favorite color, joke, food, car, or anything you expressed interest in. He was a people person who listened to you and remembered what you said, a much lacking art in today’s world. He was a jack of all trades and mastered most of them. He could climb and cut trees, build stone stack fences, lay rock and brick, work in tobacco, craft furniture and knick knacks from anything from wood to old records. He loved to draw and paint. He would attempt any repair or task when he was able.

He spent several years caring for his Grandparents. He had an immense heart that loved deeply, and he will be truly missed by many.

A Celebration of His Life will be held at a later date. Rest in Peace Sump, you were one of a kind. Please sign the online guestbook or send a Hug from Home at www.stithcares.com