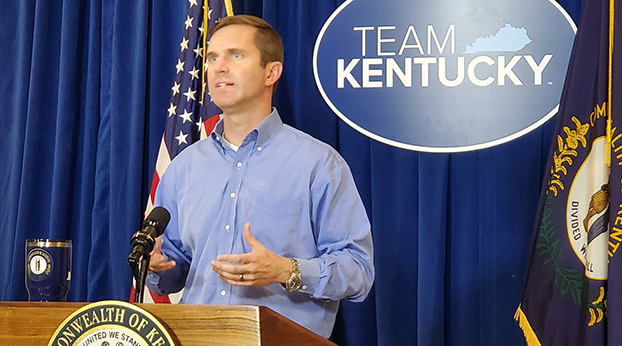 Gov. Andy Beshear announced that the state of Kentucky will apply Thursday for the FEMA Lost Wages Assistance Program, which would provide an additional $400 per week for those who are unemployed.

Gov. Andy Beshear announced that the state of Kentucky will apply Thursday for the FEMA Lost Wages Assistance Program, which would provide an additional $400 per week for those who are unemployed.

During a Capitol press conference on Wednesday, Beshear stated, “While there is still some uncertainty in this new program, it is just too important to get these dollars to our families.”

The governor said this initial application will allow Kentuckians to receive an extra $400 per week for the three-week period July 26, through August 15, if they are fully or partially unemployed due to the COVID-19 pandemic, and will apply for every unemployment program that had the $600 supplement earlier.

“At this time,” Beshear said, “only seven states have been approved for the program -Arizona, Colorado, Iowa, Louisiana, Missouri, New Mexico, and Utah – and all have chosen just to do the $300 option, because the federal government will pay the $300.  I believe that extra $100 is critically important, so we’re going to use CARES Act money to help get to that full $400 threshold.”

Beshear says Kentucky’s share will be roughly $8 million per week, or $24 million for the initial three- week period.

“We know how this money moves through the economy,” he said, “We know how important it is to these families, and while we need this money in case Congress decides to let us use some of this CARES Act money for budget stabilization, right now it’s too important to get it to our families.”

Beshear says he believes Kentucky will be the first state to apply for the full $400 under the President’s executive order.  “We believe West Virginia and North Carolina are considering that extra $100 that the state pays.”

He adds once the application is final, FEMA should approve it in 48-72 hours, and when approval is received the state will have to reconfigure its UI system to be able to make the payments, as it is being administered a different way, than when there was the $600 supplement.

“It’ll take us about two weeks to get the system to where it can process and send out those payments, and that’s us working fast,” Beshear said.  “Benefit recipients should not expect to receive the payments until early September.”

Once the three weeks of benefits are paid, Beshear said he will look at what is feasible moving forward.

Beshear reported there were 655 new cases of the coronavirus, 91 of whom were 18 years of age or younger, 15 of them were five and under, including a 12-day old baby in Jefferson County.  That brings Kentucky’s pandemic total to at least 40,926.  Kentucky’s positivity rate dropped slightly from 5.48 percent on Tuesday., to 5.41 percent on Wednesday.

For the second day in a row, Beshear reported 12 new deaths Wednesday, raising the total to 842 Kentuckians lost to the virus.

“I don’t remember two days where we had this many deaths back-to-back,” he said, “and it’s the result that we talked about earlier, that when you have 3,000 cases a week, the deaths follow a couple weeks after.  We’re at that point now.”

As of Wednesday, there have been at least 785,138 coronavirus tests performed in Kentucky, and over 9,331 Kentuckians have recovered from the virus.