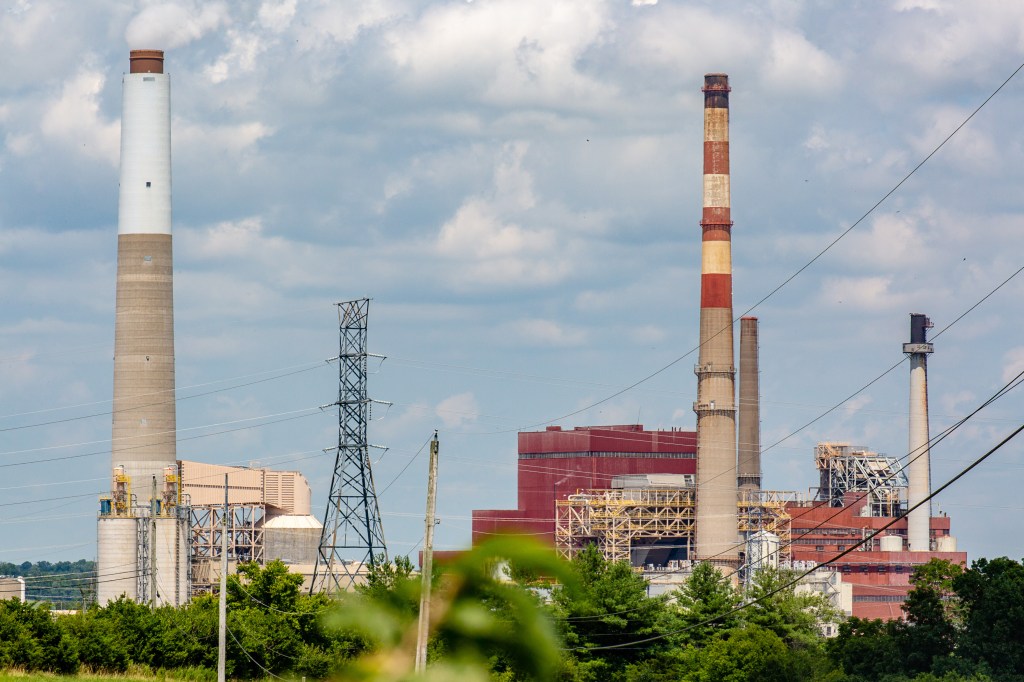 The E.W. Brown power plant in Mercer County is seen from Curdsville Road Friday afternoon. Pollution from coal ash ponds at the plant has made its way into nearby Herrington Lake, but not in amounts that cause any significant impacts, according to a study completed last month. (Photo by Ben Kleppinger)

The public will finally get a chance to weigh in with the Cabinet for Energy and Environment on its handling of the remedial action against Kentucky Utilities over toxic pollutants seeping into Herrington Lake.

Three years ago, three parties joined forces to sue KU over its coal ash runoff pollution originating from its E.W. Brown Generating Station in Mercer County, next to Dix Damn. And since then, those parties began asking the cabinet to hold a public hearing to explain the corrective action plan — or “CAP” — KU is being required to follow by the state.

On Thursday, Aug. 27, a virtual public hearing will be held, but those who want to participate must register first. Associate attorney Lauren Piette with Earthjustice, one of the partners in the lawsuit, said the hearing will specifically cover what’s in the CAP report, which can be found on the cabinet and KU websites.

“One thing to note — the report is 500 pages long,” she said about the “corrective action investigation, source assessment and risk assessment,” which was prepared by Ramboll, a consulting firm that was hired by KU.

“Critically, from our perspective, there’s nothing in this report that says the company will stop all of the groundwater (contamination) or do anything to address the decades’ worth of coal ash that’s already (in the lake).”

Earthjustice and its partners have always maintained that the CAP isn’t sufficient, nor should it have been prepared by a firm hired by the company being corrected.

“We know that groundwater contamination entering the lake is a problem. We know it’s bad. But we don’t know just how bad it is, because KU has refused to attempt to fully map out the contaminated water flows,” something Piette and others say is a missing key piece. She said the report also fails to recognize the significant risk and impact of coal ash pollution, and what it brings to the community and to the Herrington Lake environment.

Coal ash is a term for different kinds of waste left over at power plants that burn coal, and it contains a number of substances harmful to human health and the environment — arsenic, chromium, lead and mercury, for example.

KU, a subsidiary of Louisville Gas and Electric, began capping and closing its coal ash ponds. At E.W. Brown, the company said it is operating a new coal combustion residuals (CCR) treatment facilities, and a “new process-water treatment system to treat waters that come in contact with CCR materials prior to the ash pond being closed.”

Earthjustice and its partners have been asking for some type of public forum in order to explain the CAP to concerned residents who live, work and play near and on the lake, as well as get their drinking water from it. The surface waters of the Dix River-Herrington Lake watershed supply drinking water for the municipal systems of Lancaster and Danville.

“We’ve been trying to schedule this hearing for a very long time, and only got movement in the last few months,” Piette said. There’s been a lot of “back and forth,” she says, “but they’re willing to go forward.”

And it’s been a long haul to get to this point.

The suit was filed in 2017 by Earthjustice, the Kentucky Waterways Alliance and Sierra Club, and joined in on by many area activists, demanding KU clean up the pollution coming from E.W. Brown.

Testing results by the Kentucky Division of Water showed nine out of 10 fish near the plant with selenium levels 98 times the amount legally allowed. That testing was done because KU was being inspected following a state fine, and had entered into an agreement to clean up contamination. But during that inspection more evidence, like discoloration of lake water near the site, was found.

An independent study was included in the lawsuit by a fishery biologist showing deformities in the heads and spines of fish in the area, what he says is associated with selenium exposure. Those findings were eventually published in an international scientific journal but were dismissed by KU as “political posturing.” KU argued the results were “inconsistent” with what other testing had found, and that it was already under the CAP set up by the state.

But Earthjustice attorney Ben Locke said the CAP has nothing in it about the plans for the utilities to rectify what it has already done. “Instead of ordering the company to clean up, (the cabinet) ordered them to conduct a whole bunch of studies. That’s the ‘corrective action plan,’ ongoing since 2017 — studying the contamination that we already know is there.”

Then, in 2018, Earthjustice sued the cabinet, accusing it of withholding more than 180 records it had requested, including some they say are related to the testing done. That lawsuit is also still pending.

Locke said the fact the cabinet is moving forward with a hearing is an encouraging sign. “The cabinet has a mission I believe requires them to guard the health of the environment and protect the health of our communities. That would go much better if they were actually joining the conversation.”

The virtual public hearing will be held noon-3 p.m. Thursday, Aug. 27 by the Energy and Environment Cabinet on the corrective action investigation and source/risk assessment report involving Kentucky Utilities’ E.W. Brown Generating Plant on Herrington Lake. Registration is required to participate, by emailing your name and address to ewbrowncomments@ky.gov or by mailing that information to John Lyons, deputy commissioner, Dept. for Environmental Protection, 300 Sower Building, Frankfort KY 40601. Note “registration for E.W. Brown Public Hearing” as subject line. To join the Aug. 27 meeting, use the link global/gotomeeting.com/join/455179029, or dial in by calling (646) 749-3122, access code 455-179-029.

Anyone who wants to comment on the report can do so before 4:30 p.m. Sept. 15. Comments may be made orally during the hearing, or submitted in writing to the above email, or by snail mail to Lyons. All those who submit comments will be sent a “response to the public comments” document, specifying changes made or not made, with the reasons why.

If no one registers to speak by Aug. 26, the hearing will be canceled.