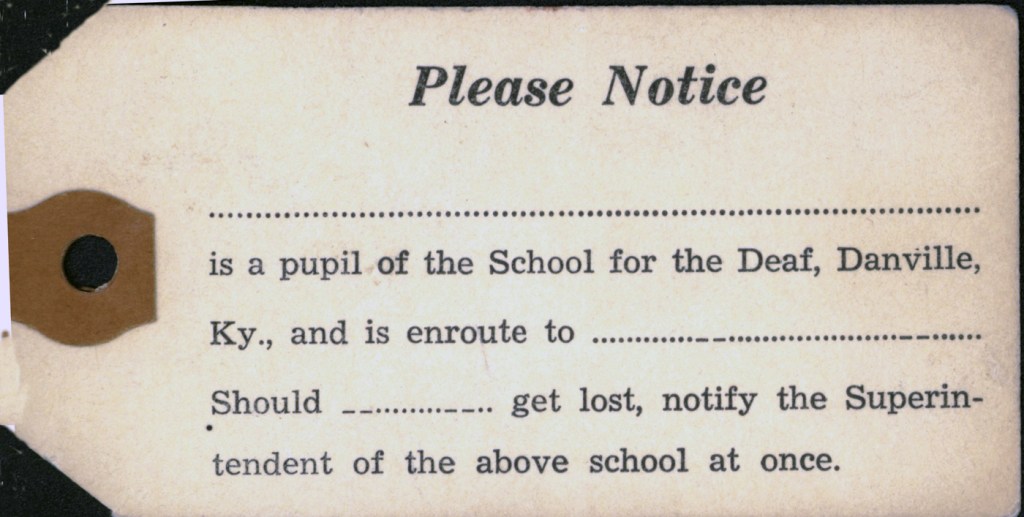 This is blank railroad tag was typical of the ones sent with students who were traveling from locations all around the state to Kentucky School for the Deaf. (Photo submitted)

To ensure that students and staff can safely return to school in 2020, back-to-school 2020-style finds students participating in distance classes at home for the first several weeks of school. Kentucky School for the Deaf students, and most other Kentucky students, will be learning at home until at least the end of September.

In the 1900s KSD periodically went into quarantine for several weeks as measles ravaged the town. The Great Pandemic of 1918 struck students and staff over the course of two months after school began in late September 1918

KSD’s school paper, The Kentucky Standard, gives a description of the opening of school 100 years ago, in September 1920, two years after the pandemic. 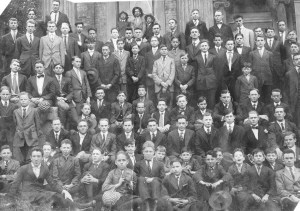 This photograph was taken of a group of the older male students at Kentucky School for the Deaf around 1920. (Photo submitted)

By 1920, routines had slipped back into place, though the economic and social effects of the pandemic lingered. George M. McClure, editor of the Standard, wrote in 1920: “School reopened on September 22nd with a fair attendance. Labor is scarce and some older boys have been detained at home to help harvest the crops. Quite a few children could not return on the opening day, owing to illness, and we lost a number because their parents have moved out of the state. There are many new pupils, and pupils returning after an absence of a year or two, however, to take their places. At the opening session on Thursday morning, the 23rd, the chapel was comfortably filled, and in a short time we expect to have as many as we can accommodate.”

He predicted that by the end of September there would be 399 pupils and by Thanksgiving, numbers would be about the same as the previous years.

Getting to Danville in 1920 could be difficult and expensive. State roads were primitive, and few Kentuckians owned automobiles. There were three alternatives – walking (some did!), horse and wagon, or taking the train.

A rail network of small, privately owned train companies covered most of the state so a passenger could connect from most areas of Kentucky through a series of rail junctions leading to central Kentucky and eventually to Danville.

McClure commended the generosity and service of the railways to the deaf students. “We are given low rates, special cars, trains are held when connections are about to be missed and the courtesy, the kindness, the willingness to render extraordinary service on the part of practically everyone with whom we come in contact at these times have placed us under lasting obligations.”

He went on: “It is quite an undertaking to bring in so many children from all over the state, but the details are so carefully worked out in advance that the reassembling of the school is accomplished in a single day, and with a minimum of confusion. Officers are on every important road to receive and chaperone pupils to school and give assistance in the important matters of transfers and baggage. Some of the officers have overseen these details on the same roads for over 25 years and are therefore familiar with every station and acquainted with every patron.”