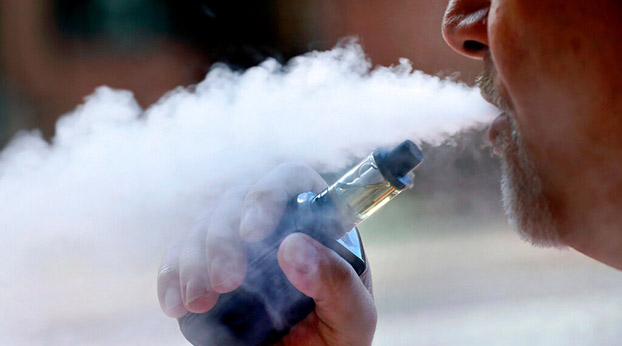 In this Aug. 28, 2019, file photo, a man exhales while smoking an e-cigarette. Health officials investigating a nationwide outbreak of vaping-related illnesses have, for the first time, listed the vape brands that are most commonly linked to hospitalizations. Most of the nearly 2,300 people who have suffered lung damage were vaping liquids that contain THC, the high-inducing part of marijuana. In a report released Friday, Dec. 6 the government listed the THC-containing products that patients most often said they’d been using, noting that some patients vaped more than one. (Kentucky Today file photo)

Nearly half of teens who use electronic cigarettes said in a national survey that they wanted to quit, and about a quarter said they had tried to in the past year.

“This suggests to me that vaping-cessation interventions are urgently needed,” Adam Leventhal, co-author of the study and founding director of the University of Southern California’s Institute for Addiction Science, said in a news release. “Youth deserve information about how to quit vaping. And for those not interested in quitting, public education campaigns that increase motivation to quit could be useful.”

A research letter accompanying the study in the journal JAMA Pediatrics says it is the first of its kind and is significant, because programs to help teenagers stop vaping are not widely disseminated and existing programs have received little empirical investigation.

The researchers say teens who use e-cigarettes are at risk for nicotine addiction, toxicant exposure, and transitioning to traditional tobacco cigarettes.

“This new data is just one more example that it”s best not to start in the first place, because half of the kids want to quit and are struggling,” said Bonnie Hackbarth, vice-president of external affairs at the Foundation for a Healthy Kentucky. “And it’s hard to quit. As we’ve said multiple times, nicotine is one of the most addictive substances on the planet and youth are particularly susceptible because their brains are still developing.”

As part of the Coalition for a Smoke-free Tomorrow, the foundation lobbied during the last legislative session for more funding for tobacco prevention and cessation, with plans to use much of the $10 million on a multimedia campaign that targeted youth.

But amid the coronavirus pandemic and the financial uncertainty that came with it, Kentucky lawmakers passed a conservative one-year budget that ended up cutting the state’s prevention and cessation budget by nearly 40%, to $2 million from $3.3 million in the fiscal year that ended June 30.

“We know that vaping has an immediate effect on youth, in terms of their attention span, in terms of their brain development, so prevention for youth is just critical and our hope would be that the legislature would at least restore that budget to the 2020 levels,” Hackbarth said. She also noted that tobacco prevention in youth will save significant amounts of money in healthcare cost down the line, since 90% of smokers started smoking by the age of 18.

In Kentucky, 26.1% of high-school students reported current use of e-cigs, defined by at least one day of use during the 30 days before the survey, and 8.7% reported daily use, according to the federal Youth Risk Behavior Surveillance System for 2019. Nationally, the survey found 32.7% of high-school students in the U.S. reported current use and 7.2% reported daily use.

The study, citing the Monitoring the Future survey, says that in 2019, 25.2% of U.S. high-school students reported current use and 11.7% reported daily use, defined as use of electronic nicotine products.

Elizabeth Anderson-Hoagland, health promotion section supervisor with the Kentucky Chronic Disease Program, said the latest federal survey also showed that about half of all Kentucky teens who use tobacco have tried to quit in the past year.

She noted immediate side effects of vaping are dry mouth, throat irritation, cough, and shortness of breath, adding that there are also potential long-term effects, like heart disease or stroke.

At this time, she said, the state directs youth who want to quit vaping, smoking or using other tobacco products to a program called “My Life, My Quit,” a free service for minors. The program includes live support by phone, text, or online chat.

Participants can join by texting START MY QUIT to 855-891-9989 or going to MyLifeMyQuit.com. Teens are eligible for up to five calls with an experienced and trained Quit Coach. The program does not provide nicotine replacement therapy.

“What teens do need is a support network for a successful quit, because teens need help with creating plans and resisting cravings,” Anderson-Hoagland said. “MLMQ is a great resource to provide that support.”

Due to low participation, she said, Kentucky no longer offers a program targeting young adults called This is Quitting. She said the state has re-directed its funding to other priorities.

Here are other resources for teens who are looking to quit include: