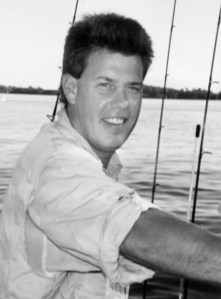 Born in Springfield, Ill, on September 10, 1963, Chad moved to Danville, KY, early in his life. He graduated from Boyle County High School in 1982 and from Murray State University in 1989, where he received his Bachelor of Science Degree in Occupational Safety and Health. He was a member of Alpha Tau Omega.

Chad was a Certified Safety Professional who worked both at home and abroad as Director of Safety Operations in numerous industries including nuclear power, heavy construction, and oil and gas.

Chad had a magnetism about him that endeared him to the many friends he had throughout his life. He was always up for something mischievous and he was full of adventure. He was a great fisherman and cook and he loved the outdoors. He truly loved his family and friends. Chad will be terribly missed, but will live on in our hearts through the best of memories.

A celebration of life service will be held on Friday, September 4th from 5-7:30 p.m. at the Mayfield Golf and Country Club, located at 1301 W. Broadway Street, Mayfield, KY.