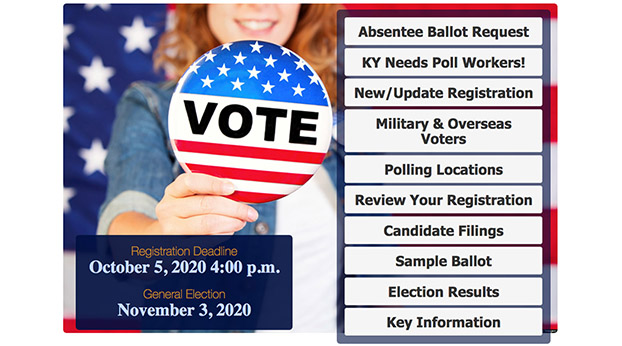 This is the home page of www.govoteky.com where Kentuckians can access all things related to the upcoming election, including requesting a ballot or changing their voter registration.

Election Day is Nov. 3, but there is a lot of preparation leading up to the process for Boyle County Clerk Trille Bottom and her staff.

Voters can now request an early-voting ballot by visiting the website of the secretary of state, and Bottom said that can be done online at www.govoteky.com and clicking on the “Absentee Ballot Request” link. She said the request process is a simple one, but added that actually receiving a ballot is a longer process.

“Once voters request their ballot through that website – we do not have the ballots, and they are not expected to get to us until some time in September – so they may be waiting three weeks, four weeks after they’ve applied before we get the ballots to mail out to them. Go ahead and request it, but you’re not going to get it next week because we don’t have them,” Bottom said.

When ballots are received at the local clerk’s office, Bottom and her staff will mail them to voters. She said as soon as a voter requests a ballot, a mailing label will be provided to her office by the secretary of state’s office, with new labels being sent out via overnight mail on a daily basis.

“That goes on until Oct. 13. On Oct. 13, we will start in-person absentee early voting,” Bottom said. “I don’t have the locations identified yet because my board of elections has to approve them, and we just found out more today about how many locations we can have and all of the rules behind that. I can say that there will be at least two early voting locations – one will be at the courthouse, and there will be an additional one and possibly two more locations that you can early vote. And that will continue through Nov. 2.”

The final day to request a ballot by mail is Oct. 9. At that point the portal will be cut off and in-person early voting will begin on Oct. 13, continuing for three weeks, Bottom said. She said that according to the secretary of state’s office, after Oct. 13, the only way to vote will be in person on Nov. 3, which is the regular Election Day.

For in-person early voting, Bottom said her office will provide some alternative hours to help make sure people have the chance to cast their votes.

“We are going to have a couple of days a week that we will have extended hours. This is not in stone yet, but for example, Mondays we may start early voting at 7 a.m. and close it down at 4 p.m. And then on Wednesdays, we may start it at 10 a.m. and close it down at 6 p.m. That way we can accommodate those early voters or those after-5 working voters. It won’t just be the normal business hours of the clerk’s office, it will be hours that hopefully will be convenient for somebody that couldn’t get to the office anyway, and they’ll be able to go vote at one of the locations,” she said.

Anyone who has not yet registered to vote or needs to change their registration can do so until Oct. 5 by visiting www.govoteky.com and selecting the “New/Update Registration” link. Anyone who is not certain about their status can check it on the website by clicking the “Review Your Registration” link.

Mailing a ballot is concerning for some voters who worry their vote will not arrive at the clerk’s office on time or may not arrive there at all. Bottom said people who plan to vote by mail should submit their ballot as quickly as possible after receiving it.

“In the last election, we had some people say, ‘Well, I got it three weeks ago, and I know it’s the day before the election, but I never did mail it in.’ Please, if you get it, vote it and get it back in the mail as soon as possible,” she said. “We will have the drop-off boxes at the courthouse again where people can bring their ballots and put them in the drop-off boxes in lieu of mailing.”

Bottom said she has spoken with post office officials and they have assured her they are dedicated to doing “everything they can to make sure the ballots get delivered efficiently and effectively.”

“That doesn’t mean everybody’s going to get their ballot, because things just happen, just like anything else,” she said. “It may not reach you, or it may not get back here in time once they’ve mailed it. So if they’re uncomfortable with mailing, they do have the option to bring it to the courthouse and put it in the drop-off box.”

With the new face of voting, there are challenges for the county clerk’s office in any community. Bottom said she and her staff see the biggest challenge as getting the ballots out to voters, and the state board of elections helps in that process. In addition, she said learning the new rules and regulations pertaining to a COVID-19 election can be difficult.

Locally, this election will be a difficult one in terms of making sure every voter gets the correct ballot. Bottom said the previous election had two ballots, and voters could simply vote on a Republican or Democrat ballot to choose their candidates. This election will be much different.

“The only challenge for this election is that we’re going to have 11 different ballot faces. In the primary, we had two ballots. You either voted Republican or you voted Democrat. This election is going to have two city councils, one city commission, three county school districts, two seats on the Danville Independent school board, and one unexpired term on the Danville city school board. That makes up a total of 11 different ballot faces,” she said. “What that means is, wherever the person lives, if they live in the city and they live in the city with city schools, that’s a ballot face. If they live in the city but they’re in a county school district, that’s another ballot face. If they live where there’s not a school district running, just a county ballot, that’s another ballot face. It goes on and on. So the challenge is going to be making sure the voter is receiving the correct ballot face because these locations are going to be where any voter from anywhere in Boyle County can vote. The precinct officer is going to have to make sure the person from Junction City doesn’t receive a Perryville city ballot or a Danville city ballot. That’s going to be the challenge for this election.”

Since the traditional voting precincts will not necessarily be where a person votes, Bottom said some poll workers will not be in the location where they normally work during an election. She said although the workers are experienced in their duties, some will be in a new location and seeing new people they may not know.

“A lot of the facial recognition, that’s why you’re going to be asked for your driver’s license a lot. Some of the poll workers are not going to be familiar with who you are. Please bring an ID,” Bottom added.

“If they live in the city limits and they get a ballot that doesn’t have any city commission people on it, they don’t have the right ballot. So I encourage voters to check their ballot when it’s given to them at the precinct. This is an unprecedented election. We’re going to do our part, and we’re going to train, but the voter needs to be sure they’re getting the ballot they need to be getting. Mistakes happen, and not on purpose. We’re human beings, and mistakes just happen.”

The future of elections?

Bottom has been in office since 2008, and this will be the 10th election she has worked. She said she has not heard anything official, but she does believe the mail-in voting and early in-person voting could be the future for elections.

“I think this is setting a precedent for it to be in the future, so I would not be surprised if, in 2022, if this did not become legislation. Not just emergency regulations, which we’re operating under right now, but actual legislation,” she said. “I think it’s been a long time coming, and I think that this epidemic has pushed it on up to the forefront a little quicker. I just think it’s been pushed forward a lot more quickly due to the COVID-19 situation, and I expect to see it in the future.”

Local voter turnout in the November 2019 election was approximately 47%, according to Bottom, who said 10,484 local voters went to the polls. Currently, there are 22,921 voters registered in Boyle County, and she said she expects a higher turnout for this election because of the many options for voters. She said her office has ordered ballots for 70% of the voters in each precinct in preparation for a high turnout.

“I do, because a lot of people that are on extended work schedules – you have your medical personnel, you have your fire and safety personnel – nurses, doctors, factory workers – many of them are on 12-hour shifts or swing shifts, and they don’t want to go vote when they get off work, they want to go home and go to bed. That’s understood,” she said. “But I think it will help that population that I feel like has sort of suffered in the past by not being able to vote when it was convenient for them, and I think this is a way to open that up by having an extended voting time and fluctuating hours, where the centers are open at different times to help accommodate those people. It would be sad to go through all of this and not have a high turnout.”

Bottom said anyone with questions about voting can contact her office at 859-238-1110.