Faces of our Farmers: Leslie Abbey

By Emily Smith and Robin Hart 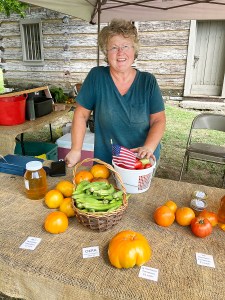 Leslie Abbey, of Garrard County, sells produce she raises on her and her husband Robert’s farm. They also raise chickens and lamb. (Photo by Robin Hart)

Leslie Abbey is the face you’ll see at her Sticky Wicket Farms tent at the Boyle County Farmers’ Market on Saturdays.

“I try to grow a variety of things throughout the season, from arugula to zucchini,” she said.

“There’s at least one ingredient from our farm” in everything she bakes and brings to the market, she said. Mostly the eggs, but she also raises lamb and chickens for meat.

Abbey hasn’t always been a full-time farmer though. She worked as a loan officer in the northwest suburbs of Chicago for many years. Then she owned a mortgage company while living in a modest three-bedroom ranch house on a quarter acre in a suburb of Chicago. She said real estate taxes ran about $8,000 a year. “Even without a mortgage you feel like you’re just renting your home from the government.”

Eventually, she and her husband Robert decided it was time to take a “relook at life.”

In 2015, while traveling to Tennessee where they thought they would like to plant roots, they found what they really wanted was in Kentucky.

“When we passed through Kentucky, it just felt right,” Abbey said.

They purchased a 12-acre farm in Garrard County near Lancaster and moved there that same year. Abbey said they lived in an RV for 60 days while getting on their feet and started farming “from scratch.”

Abbey said she loves working hard on their farm, “but it’s been a learning process.”

And they attend the University of Kentucky’s Third Thursday Thing Program which she credits for much of their farm’s success.

Soon after purchasing their farm, the couple was “joy riding” around the area and spotted a couple of sheep grazing in a field. She said they were so pretty she took a photo of them.

Not much later, Abbey took a job at Lowe’s before their farm was producing. And a co-worker told her that her grandfather wanted to get rid of his sheep.

As it turned out, they were the same sheep she admired in the field. She took them home, and attended free classes on how to raise sheep that UK offered in Versailles.

“Thank you Kentucky for helping me learn,” she said.

“I love providing a variety of produce. But that’s the big challenge for me because I’m willy nilly.” One day when she thinks she’s ready to pick tomatoes, but has to quickly switch plans to harvest okra before it gets too big, she explained.

Her husband leaves the farming to Abbey, she said. “He’s the fixit guy.”

The farm’s name, “Sticky Wicket Farms” was one that stuck in Abbey’s head, she said, and comes from the English game of Cricket.

“The playing ball sits on a stump called a wicket. If the wicket is sticky, the ball won’t move as it’s supposed to, so you’ve got a little problem on your hands,” Abbey explained. The “sticky wicket” problem reminds Abbey of all the little problems that constantly come up when living on a farm.

She says every day they must overcome some sort of barrier, whether that be a broken handle, angry bees, or a runaway chicken.

And even though the Abbeys have just one farm, the name implies they have several. “The Farms is spelled with an ’s’ because there’s a lot going on.”

Abbey said, “Even if we’re not profitable after all of this work, when I hear that people enjoy what we’re doing, and it tastes different, that just really fills my heart.”