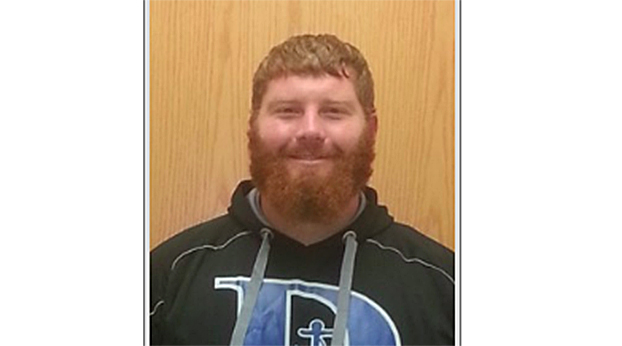 After a former Danville High School teacher’s sexual message to a newly graduated student was posted by her mother on social media, he reached out to offer an apology, saying he’d made “a terrible mistake.”

But after making the post, April Salyers learned that many other former, female students of Jerrod “J.R.” Dean had similar experiences with him, in addition to her daughter — some spanning back years.

Dean was a marketing teacher and an assistant football coach at DHS, but was terminated Aug. 24, after being on paid leave, according to information received by an anonymous source.

Superintendent Tammy McDonald would not answer questions about Dean’s employment status or how long he was with the system, and responded “please send an open records request.”

Danville Independent Schools does not comment on personnel issues, but several females have since reached out to share their experiences. Some did not want to be identified, but provided screenshots of messages from Dean as proof.

All of them say they didn’t come forward when it happened because they thought they were the only one. Some were ashamed, wondering what they’d done to deserve the inappropriate attention; others were still shell-shocked by what he had said to them, because they saw him as a father figure.

Now, with several coming forward, they say it’s clear there was a pattern, and wonder “for how long?”

‘I wasn’t the only girl’

Salyers said she decided to post the screenshot of Dean’s messages out of “a need to vent.” She had no idea what would follow.

Kaitlynn Wilkerson, her daughter who just graduated, didn’t want to show her mom the message at first. “One of her friends talked her into telling me,” Salyers said. “She said, ‘Mom, I need to read something to you. Mr. Dean made me feel uncomfortable.’”

Wilkerson was close to Dean and would confide in him at school, and he reached out after graduation to “check on her.” They were having a discussion about her anxiety and depression issues.

Dean mentioned a medicine, and that there was one side-effect to it: “It makes me want to f ***.”

“I was so angry, I thought this was a person she could trust,” Salyers said. “Within 15 minutes of that being posted, he attempted to message me.”

Dean wrote Salyers, “I feel as though I need to reach out to your family and explain myself. I have made a terrible mistake.”

Salyers did not respond and blocked him. She said DHS Principal Thad Elmore contacted her the following day after making the post to set up a meeting. “There was a lot of apologizing going on,” she said, but told him that’s not what she’s after. “I just want it to stop, and never happen again. This whole thing is disturbing, and how long it’s gone on.”

Salyers said she attempted to reach out to Superintendent McDonald, “but I was told I could not talk to her, and that if I did, the investigation would have to be ‘sent outside’ of the system, because she was the ‘lead investigator.’ Which doesn’t make any sense to me.”

According to the “Danville Staff Acceptable Use Policy,” which was updated in May of 2019, staff members are prohibited from “‘friending’ or connecting with students using personal social media accounts.” It also says that “direct, individual texting with students is discouraged, except when absolutely necessary and should always include another staff member or the student’s parent/guardian.”

Over the next few days, Salyers began to receive private messages, all from teenage females,  sharing their story and messages from Dean, all with a common thread.

“He had become close with them in school, kept in touch with them after they graduated, then almost immediately, right when they turned 18, he sent them sexual things …” and other inappropriate messages, Salyers said.

One former student shared messages he sent about her “banging body … I’d like to explore it.” He invited her and a friend to his home, offering the teens alcohol.

Dean made comments about her pictures on social media being “very provocative,” and “that’s all I can say about them,” but said he’d like to say more to her in-person. “It’s nothing personal, I’m just leary in those conversations being out there in today’s age,” he wrote.

Later that same night, he texted “I was eventually gonna beat around the bush and ask about sex.”

She said, “This has been going on since 2018 (that Dean has been messaging her), and it’s the first time I’ve come to realize I wasn’t the only girl he was doing this to.”

Another former student wrote that he had conversations with her about her sexuality. “I stated I dated women, and he would ask how would I have kids, and say I need to know what a man would be like.”  She said after she graduated and came out as bisexual, he messaged her “stating he’s glad I can now enjoy and see the pleasure of a man … that I need to relax in college and just get drunk so I can get laid.”

Messages show him telling a student that he never tried to get close to her in high school because he knew she “was trouble.” When she pressed him on what that meant, he said because of “how cute” he always found her.

Saylers said, “He got pretty tight with most of them during school. One of the girls — she thought the world of him — told him some deep secrets about herself she wasn’t comfortable telling anyone else, then he pulls this with her … I’m pretty sure that’s what’s called ‘grooming.’”

‘I figured you would hear about it …’

“I graduated this year … and I’m going to school to get my nursing degree,” said Anna Blain. “I’m actually a patient care technician, and part of the reason I am is due to Coach Dean.”

Dean helped her study and pass exams, and achieve other goals in her life. “I looked up to him like a father-figure. I had him all four years.”

Blain said she had confided in Dean about a traumatic incident from her childhood — something she had never been able to talk to anyone about — and he helped her get counseling for it. “I just really looked up to him.”

Then, after she graduated, Dean reached out with his “check in,” asking about an exam she was preparing for. They spoke about where she was living now, how he had family near and would like to visit her, and the next step in her career.

Dean told her how proud of her he was.

“Thank you for believing in me,” Blain wrote to him.

Dean responded, “You’re welcome. I’ll stop there before I cross a line.”

Blain was confused, and even apologized in case she “said something wrong.” Dean responded that she “didn’t do anything,” and that he wanted to stop before he “made it awkward.”

She attempted to politely end the conversation, several times, and Dean told her he’d been drinking earlier in the day, that he might say things she’d “find weird …. when you want to hear the weirdness, let me know,” then said, “I figured you would hear about it sooner.”

Dean continued texting her, but she ignored him, until he wrote: “Just curious how freaky you are now that you are of age.”

Blain paused for a moment after reading that message out loud; her voice had become shaky.

“Because I had a situation that had happened to me when I was younger … and I talked to him about it … I trusted him. I really did. So this is hard to talk about.”

But, Blain shot back at him. ”Um, I’m blocking you, this is very inappropriate,” she wrote. He immediately apologized, texting “it won’t happen again.”

Then, a few weeks back, Blain saw Salyers’ post involving her daughter. As disturbing as she finds what apparently is a pattern of Dean’s, she did feel some relief.

“I thought, I’m not the only girl. And I hate to say this, but it did make me feel better about it.”

Although Blain turned 18 in February, while school was still in session, Dean waited until after she graduated to change his tone.

Every female who reached out to talk said the same thing.

“It was literally a couple days after I graduated that he started messaging me,” said another former student, who does not want to be named.

Dean sent things to her while she was on vacation with her father, who she said knows Dean well and has for some time. “He said he wished I was older so he could take me out for an ‘adult beverage.’” She stopped responding, and the next day he messaged her an apology, “He said ‘sorry about the weird comments,’ and said he had been drunk.”

Later, he began texting her things like how beautiful she was, that she was always “his favorite” in school, “and how he wished he ‘had a chance with me.’ I blocked him after that.”

She said another former student she knows of also received “creepy” messages from him, just after she graduated high school. “This person just graduated from college, too, so I just think — how long has this been going on?”

Blain said it’s disturbing how purposeful Dean seemed to be with who he messaged sexually, making sure all were “of age,” as he put it, even if that meant they had just graduated the day before.

“But it weirds me out so much that he watched us grow up through high school, then starts doing this … That makes it way creepier to me.”

Blain said she’s grateful that the Danville Board of Education “is doing something about this … I feel like he was grooming us, all of us. I am disgusted.”