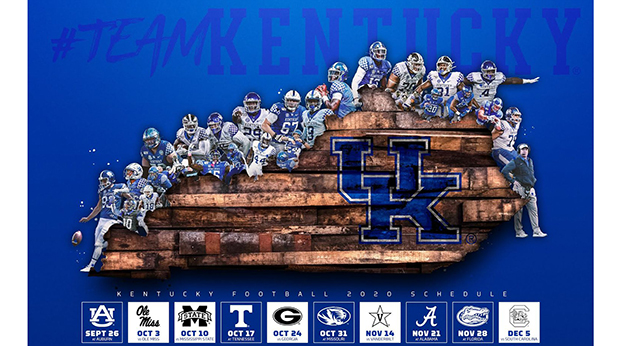 The game times for three of Kentucky’s first four football games have been set.

Kentucky’s players are looking forward to the delayed season opener and don’t mind the early start to open the season.

“I’m not sure what the team thinks, but I think we can all agree on one thing — we’re just ready to play, it doesn’t matter what time it is,” Kentucky running back Chris Rodriguez said. “The game could be at 8 a.m. in the morning, were still going to come out and play our best game.”

The Wildcats will play a 10-game, league-only schedule this season. The remaining game times will be announced during the normal 12- to six-day selection process.

Kentucky wasn’t listed among the teams on the SEC on CBS for the first two weeks, which are placed in the 3:30 p.m. kickoff slot. Mississippi State at LSU will be televised the first week, followed by Texas A&M and Alabama the following week on Oct. 3.

Kentucky offensive coordinator Eddie Gran said last Saturday’s scrimmage was typical when it comes to the first one of the fall.

“We were OK and you can only imagine the first scrimmage,” Gran said. “I didn’t like the way we finished. We moved the ball decent inside the (20-yard line) and we kicked some field goals, we’ve got to get those converted into touchdowns. … We’ve got a lot of work to do and we’ve got to be a little bit more consistent. I get it, it’s the first scrimmage and I’m not going to panic yet. The offense is about execution and we’ve just got to get better at that (this) Saturday.”

“You cheer us on the court, but we are asking you to support us off the court,” the players said in a  video posted to the official UK basketball Twitter account Monday night. “Be a part of the change.”

The message was to help end racism.

“The time for change is now,” the players said in the video. We’ve watched for too long now as our mothers, our fathers, our brothers and our sisters have been profiled and discriminated and even beaten, shot and killed. The victims of police brutality with no justice.

“We grieve with you, we are angered with you and we as brothers, black and white, are here to help to put an end to it.”