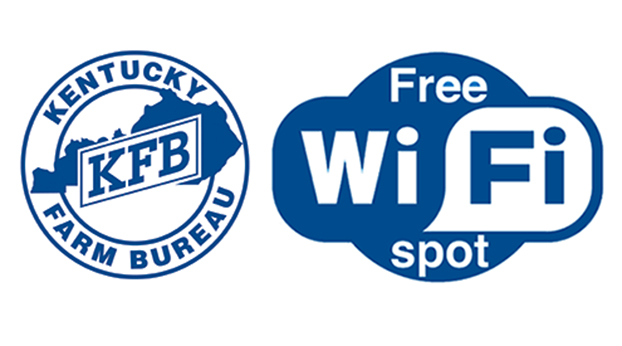 Kentucky Farm Bureau activated a free, public Wi-Fi internet signal from 155 of its locations statewide on Wednesday, including in Boyle County, and announced its plan to make that same signal available at its remaining 42 offices over the next several weeks.

The Wi-Fi network – with its easily identifiable name, KFBFreeWiFi – is accessible from the parking areas around KFB’s buildings from 7 a.m. -10 p.m. daily. It is free and no password is needed. The Boyle County office is located at 446 N Danville Bypass in Danville.

Agency Manager Jim Stevens said a person doesn’t have to be a Farm Bureau member to use the free service.

On Wednesday, a crew was at the Danville office “tweaking” the wifi signal, and would probably return on Thursday to add a booster to make it as strong as possible, Steven said.

Bright blue signs will designate where drivers can park in the lot below the building, he added.

Stevens said the KFB leadership “was concerned about people in areas, especially rural areas, where wifi was not accessible.”

For example, the Forkland area doesn’t even have cell phone service, he added.

Historically, KFB Insurance was formed to provide insurance to people living in the rural areas who couldn’t purchase it from other providers in the towns and cities. “This wifi service is just an extension of that history,” Stevens explained.

“Reliable broadband internet service, especially in the rural parts of our state, is something that far too many Kentuckians still don’t have access to in their homes,” said Mark Haney, President of KFB. “In a world that now demands video meetings, virtual events and continual email communications – not to mention the tens of thousands of students who are about to start their new school year from home – internet connectivity is a must. We want to help ease that burden for some of our fellow Kentuckians through this initiative.”

With at least one office located in each of Kentucky’s 120 counties, KFB is well-suited to provide free Wi-Fi access to communities across the Commonwealth. Signs identifying parking spots where the Wi-Fi signals are strongest will be placed at KFB’s offices, and no online registration or even KFB membership is required to use this service. Kentuckians can also maintain proper social distancing practices while accessing the internet through this free Wi-Fi signal from the convenience of their own vehicle.

By providing this free service, KFB is focused on helping Kentuckians remain connected where the broadband availability is weak or nonexistent, especially with the added pressures of remote work and online learning resulting from the coronavirus pandemic.

KFB’s efforts are also part of a nationwide effort called the “American Connection Project” led by Land O’ Lakes. Constructed to bring attention to the lack of rural broadband availability across the country, Land O’ Lakes sought partners who were deeply rooted in rural communities to assist with their goals. Prior to KFB’s launch, the American Connection Project had assembled a network of more than 90 businesses, trade associations and academic institutions in 19 states offering up more than 150 of their locations as free Wi-Fi hotspots. KFB more than doubled that number with its go-live today while adding Kentucky to the list of participating states.

“This initiative may seem like a drop in the pond as it relates to solving the overall issue, but if we can help one student finish a school project, or one small business owner complete a payroll schedule, or one grandparent video conference with a grandchild they haven’t seen in months, then this entire effort will be worth it,” concluded Haney.

To find a Kentucky Farm Bureau office and free Wi-Fi signal near you, visit kyfb.com/find/.