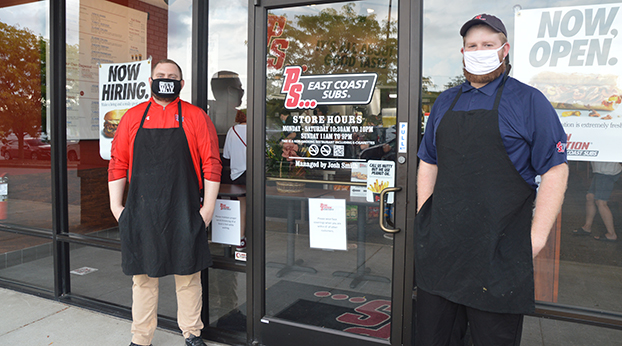 At the new Penn Station restaurant in Danville, which opened Aug. 21, Director of Operations Allyn Townes, left, and General Manager Josh Smith oversee the restaurant. They grew up and graduated from Danville High School together. (Olivia Mohr photo)

When a Penn Station restaurant opened in Danville on Aug. 21, director of operations Allyn Townes said at first there were some hiccups with enforcing social distancing and other guidelines due to the COVID-19 pandemic, but otherwise the opening has proven bustling and busy. He said the restaurant has approximately doubled its projected sales so far.

Of the 12 locations in the franchise group, Townes said the Danville location has been the busiest since it opened, despite the pandemic. When the restaurant first opened, a staff member was by the door managing how many people could come into the restaurant at a time and practicing social distancing, and the restaurant still practices social distancing guidelines and mask wearing. Townes hired most employees about a month before the opening and has not struggled with hiring a staff, but he said some Penn Station locations have struggled with retaining employees and getting them to come back to work if they are still drawing unemployment benefits.

Townes and the general manager of the restaurant, Josh Smith, graduated from Danville High School in the same graduating class and were friends growing up in the community. Townes began working for Penn Station eight years ago and became a general manager seven years ago. At the time, he mentioned it would be a great idea to put a location in Danville, and there was an effort to do so five years ago, but a location opened in Lexington instead.

Now, Smith said the location in Danville at 202 Skywatch Dr. is great because it’s right by Kroger and has good visibility.

Especially due to the pandemic, Townes said customers have expressed interest in using DoorDash as a third-party food delivery, but due to an emphasis on preparing the food fresh and keeping it fresh, Townes said the restaurant has not started using DoorDash yet, but will in the future.

President of Penn Station Craig Dunaway said the use of third-party delivery at some of Penn Station’s more than 300 locations in 15 states has been something the chain has needed to adapt to. Because fewer customers are coming into restaurants and some locations prohibit dine-in services, third-party delivery is a useful resource but something he believes in some ways compromises the integrity of the product because the food is not as fresh. However, he said, it’s important to adapt.

“What we were able to do when COVID hit and a lot of businesses and just restaurants in general were struck, we felt like in some respects, it was our responsibility to try to make sure we tried to stay open and we looked for ways to make it more efficient for our franchisees and more efficient for our customers to be able to get our food and try to remove any barriers that might have been there,” Dunaway said.

One challenge, Dunaway said, has been adapting to state-specific guidelines during the pandemic. For example, he said on Sept. 1, Illinois officials announced that no indoor dining would be permitted in restaurants. Every state has different guidelines, he said, so it’s been important for Penn Station leadership to be close to the restaurants and markets they serve and to understand local health code.

Prior to the pandemic, Dunaway said, about 60% of sales were to-go orders. This has made it easier to adapt, as the majority of customers don’t dine in the restaurants under normal circumstances, he said.

When it comes to the Danville location, especially being a local himself, Smith said it’s important to him to practice good customer service for the community.

“Just being a general manager over the store, just because I’m here makes me want to push to have the great service that we should have at any restaurant, that I would want to have if I go out to eat,” Smith said. “Just from being from the community, I want to make some great food for everyone who comes in if I know them or don’t know them.”

Townes said because he is also a local, his focus is on propelling employees’ future employment. He said when he can, he wants to focus on hiring employees to leadership positions or, if they are more temporary employees, his goal is to do what he can to prepare them for future job opportunities.

“Once you’ve done this for a long time, it stops being about the money and it becomes more about developing people, and that’s what I get out of this job now,” Townes said.