Farming is a family affair for Ethingtons 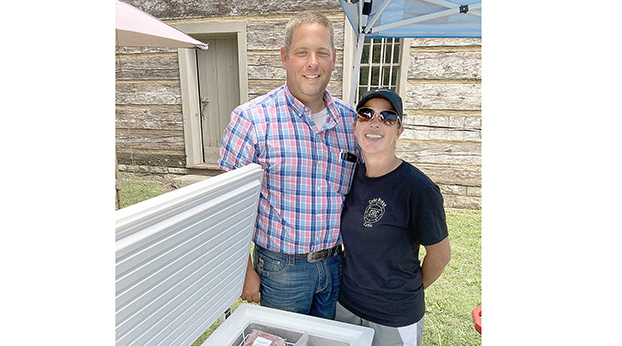 At the Boyle County Farmers Market on Saturdays, John and Melanie Ethington, owners of Cedar Ridge Cattle, sell frozen burgers and a variety of steaks and roasts from cattle they raised on their farm off of Wells Landing Road. (Photo by Robin Hart)

Melanie and John Ethington, and their children Maddie and Quentin, are in the cattle business.

At the Boyle County Farmers Market on Saturdays, they sell ground beef as well as a variety of steaks and roasts from cattle they raised on their farm off of Wells Landing Road.

Maddie and Quentin are Future Farmers of America members and show their heifers and steers. In fact, they are champions.

Just last week at the Kentucky State Fair, they won the Champion Red Angus female and the Champion and Reserve Red Angus Steers with cattle they bred and raised on the family farm.

As their primary jobs, John works in the cattle industry for another company and Melanie is a social worker. But they also raise about 50 head of red angus for their own business, Cedar Ridge Cattle, John said.

When buying your steaks and burgers from a local farmer, “You know where it’s coming from.”

Deadliest week on record for coronavirus in Kentucky