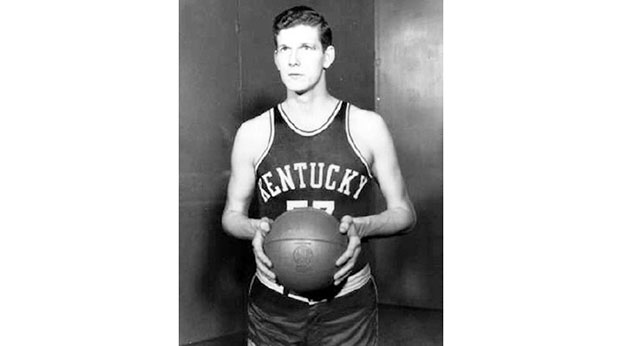 Bill Spivey was an All-American at UK and former Kentucky player Guy Strong says Spivey is better than any center UK has had since then. (UK Athletics Photo)

Just how good was former Kentucky center Bill Spivey, the first 7-footer to play at Kentucky and the national player of the year in 1951 when Kentucky won the national championship (he had 22 points, 19 rebounds in the title game)?

Spivey didn’t get to play at UK again. He was injured the first half of the 1951-52 season and then sat out the second half of the season after being implicated in a point-shaving scandal. Spivey always denied the charge, but UK banned him from playing. He was indicted on perjury charges after testifying before a grand jury in New York but was not convicted even though the NBA banned him from playing.

One of his teammates at Kentucky was Guy Strong, who later became head coach at Kentucky Wesleyan, Eastern Kentucky and Oklahoma State.

“The centers that have been there (UK) since then, he would have knocked their dipstick in the mud. He was tough,” Strong said.

Strong —who had to attend the same tryout to make the UK team that Spivey down — still remembers scoring 14 points as a sophomore in Madison Square Garden before spraining his ankle.

“We played St. John’s there every year. Coach (Adolph) Rupp wanted to be in the Garden, which was the mecca of college basketball,” Strong said. “But it was in that area where the fixers operated.”

Strong eventually left Kentucky after the national title season when he seldom played and served in the Korean War before playing his final season at Eastern Kentucky. However, he remained friends with Spivey.

“We traveled in one car to games and played about 15 games,” Strong said.

One game was in Williamsburg and Strong assumed it would be against a local team. Instead, NBA players Jack Coleman and Arnie Risen were on the other team. Coleman played at Louisville and then played for the Rochester Royals and the St. Louis Hawks in the NBA from 1949-57. He had 6,721 points and 5,186 rebounds in his career and played in the NBA Finals three times. Risen was in the NBA for 10 years and scored 7,633 points. He won two NBA championships.

“We beat them by about 12 points I think. That’s how good Spivey was,” Strong said. “Risen came in and said, ‘Damn Spivey, if not for that point shaving not letting you play in the NBA you would have been a shot in the arm for the whole league.’ He was never indicted and never played in the NBA. If he had, everyone would still know his name.”

Farming is a family affair for Ethingtons