$400 extra for unemployment benefits in effect 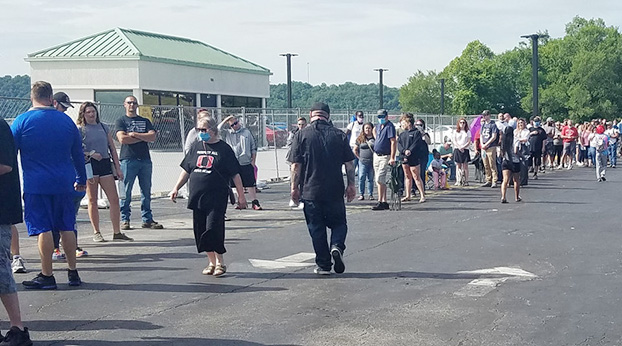 Hundreds wait in this line earlier this year to check on unemployment benefits. (Kentucky Today/Tom Latek)

The payment process for an additional $400 per week in additional short-term unemployment benefits has begun, the state Labor Cabinet announced on Friday.

On Aug. 21, Gov. Andy Beshear announced that the state’s application for FEMA’s Lost Wages Program, more federal money to aid unemployed Kentuckians, had been approved. The programmers have completed the final modifications to the unemployment insurance systems so the payment process for the Lost Wages Program is underway.

Self-certification has already been provided by most claimants and those who still need to complete the process will be notified by the Office of Unemployment Insurance. Individual payments will be issued to claimants for each of the 3 weeks a claimant is eligible. The Labor Cabinet says claimants should begin to receive payments within the next few days with payment for the first week going out on Friday.

The state of Kentucky decided to provide the extra $100 using CARES Act money. Kentucky’s portion will be approximately $8 million per week, allowing the unemployed, who qualify, to receive an extra $400 per week for the three-week grant period.

“This program will allow about 80,000 Kentuckians receiving at least $100 a week unemployment benefits for the weeks of July 26-Aug. 15 to receive an additional payment of $400, if they are unemployed or partially unemployed as a result of COVID-19 pandemic,” Gov. Beshear said. “The $400 will apply to all programs: traditional UI, the Pandemic Unemployment Assistance program and the extended benefits programs.”

The Kentucky Labor Cabinet and Office of Unemployment Insurance say they continue to work each day towards a resolution for all unresolved claims and will not stop until all Kentuckians have received the benefits for which they qualify.

At this point there will only be the three weeks of enhanced benefits, as partisan bickering in Washington has resulted in no agreement on another round of more generous unemployment benefits to those who’ve lost their jobs because of the pandemic, as well as money to help schools reopen, and to help states and local governments avoid layoffs.

However, Gov. Beshear has said once the three weeks of additional benefits are paid, he will be looking at what is feasible going forward.

Boyle set to kick off season under new coach