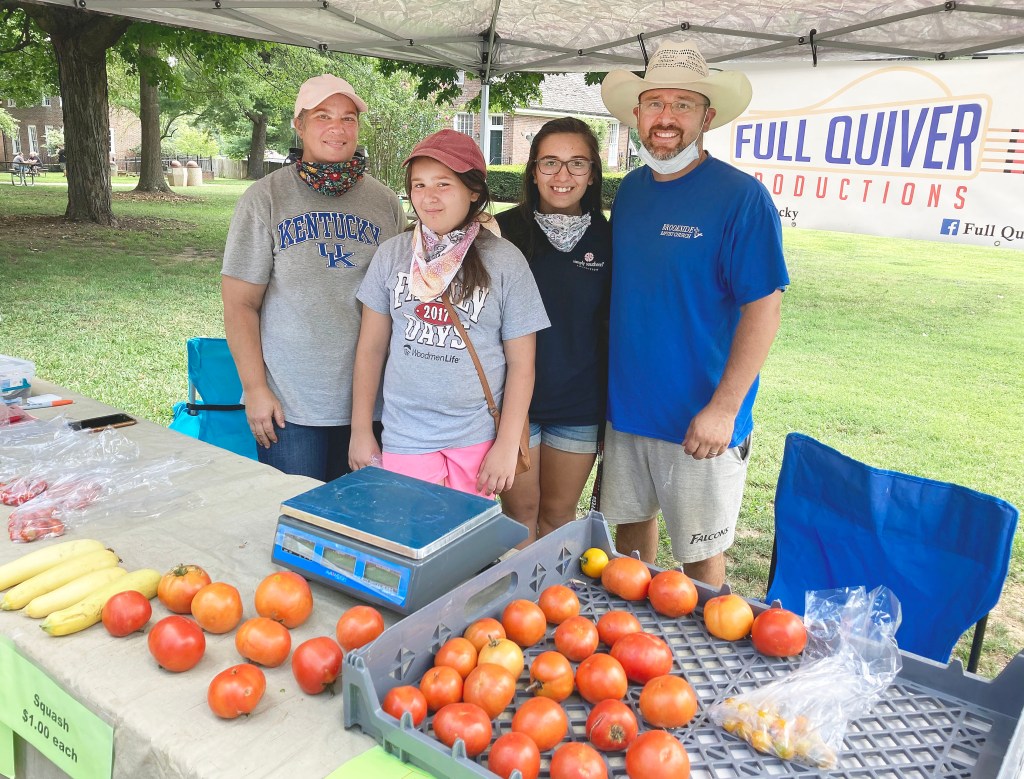 Paige and Brian Burkhead, with their daughters Lori and Brianna, and son James, who was home watering plants on the family farm when the photo was taken, sell their produce at the Full Quiver Productions tent at Boyle County Farmers Market at Constitution Square on Saturdays. (Photo by Robin Hart)

Full Quiver Productions is another family-operated farming business that sells at the Boyle County Farmers Market on Saturdays at Constitution Square.

On a recent Saturday at the market, Brianna was helping the Sticky Wicket farmer sell her produce nearby. Lori was working with her parents under the Full Quiver awning selling their vegetables and other homemade goodies. But James had stayed home to water their newly transplanted lettuce so a fall crop would be coming to the market soon.

Paige enjoys turning their raw produce into other products.

“I’m certified for pepper jellies, pear preserves and tomatoes, canned in their own juice,” she said. And they are especially tasty during the cold winter months, she added.

Brian grew up in Lancaster and is the pastor of Brookside Baptist Church in Nicholasville.

When his dad became ill with pancreatic cancer several years ago, his family moved back to the Garrard County family farm to help take care of him. And that’s when Brian began farming again.

Part of his dad’s treatment was to adhere to a strict diet, Brian recalled. And through his research for healthy food options for his dad, “I started learning how much stuff was being used on our foods.”

For instance, his father was on a very low-sodium diet. But even chicken purchased at the grocery store contained salt, Brian said.

“Go to the store and pick up a package of chicken.” Most of the poultry “has been injected with saltwater,” according to the labels, Brian said. Or they’re frozen in a sodium solution. “He wasn’t allowed to have that.”

So they eventually shifted into organic farming so they would have “healthier food and healthier living.”

Being organic producers keeps the chemicals off the food, Brian said. But it doesn’t prevent bugs from making their marks.

He added, “If the bugs are eating on it, it must be good.”