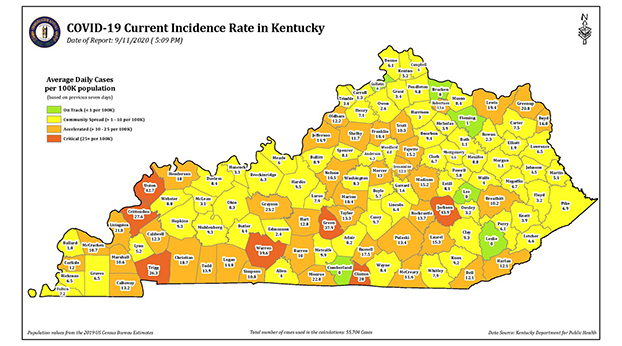 Friday saw the third-highest daily number of new cases of the coronavirus, according to Gov. Andy Beshear.

He reported there have been at least 55,704 cases in Kentucky, 948 of which were newly reported Friday. 151 of those cases were from children ages 18 and younger, of which 24 were children ages 5 and under. The youngest was a one-month-old from Jefferson County.

There were also nine new deaths announced on Friday, which raises the total to 1,044 Kentuckians lost to the virus.

“Remember other people’s health and lives are on the line and we need you to do your part,” said Gov. Beshear. “Do your patriotic duty. Wear your mask. Social distance. So little is being asked of us in this crisis. It just takes a little bit to be a hero right now.”

As of Friday, there have been at least 960,430 coronavirus tests performed in Kentucky, while more than 10,800 Kentuckians have recovered from the virus. Beshear has said that number is likely to be much higher, as recoveries often go unreported, while it is required by law that state public health officials are informed of positive cases and deaths.

The state’s positivity rate, which is based on a seven-day rolling average, currently stands at 4.70 percent, a figure that began rising later in the work week as the results from labs that had been closed for the long holiday weekend began to arrive.

On Tuesday, the rate dropped below four percent for the first time in a long time, at 3.91 percent, with 273 new cases. Wednesday, it dipped a little more to 3.84 percent, although the number of new cases reached 667. Thursday’s positivity rate went back over four percent to 4.14, while the amount of cases increased to 805.

“We’ve got to come together and never make one another the enemy,” said Gov. Beshear. “Let’s step up and meet our challenge. We’re all called to be heroes in our time.”

Nationwide, there have been 6.43 million cases of COVID-19 and 192,663 deaths, according to Johns Hopkins University.