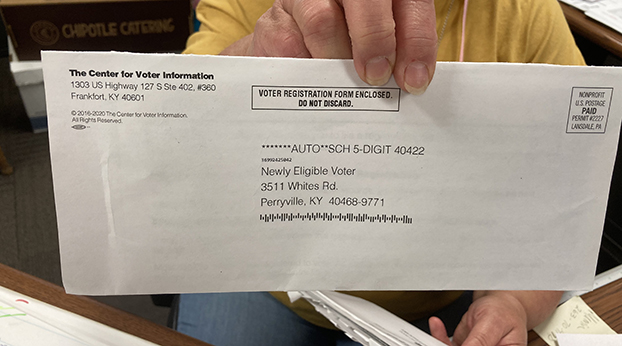 Boyle County Clerk Trille Bottom displays a copy of a letter being sent to homes around the county. She said she feels the letters are misleading. (Robin Hart photo)

An organization’s campaign to register voters in Kentucky by mailing people registration forms is causing some confusion to the recipients.

Boyle County Clerk Trille Bottom said her office has received multiple calls from people who have received mail at their home addressed to “Current Resident” or “Newly Eligible Voter” and are worried that they somehow are not registered to vote anymore.

The mail is being sent by the non-partisan, non-profit organization Center for Voter Information, which partners with the Voter Participation Center. According to its website both organizations were founded to “provide resources and tools to help voting-eligible citizens register and vote in upcoming elections.” They target the Rising American Electorate (RAE) which consists of young people, people of color and unmarried women, the website stated.

Bottom said the Kentucky State Board of Elections executive director sent a warning to all county clerks on Tuesday about the mass mailings that have been arriving in mailboxes recently. The email stated that at his office “our phones have been ringing off the hook, and I have had multiple phone calls with this org(anization) over multiple years asking them to stop.”

Bottom said she wants the public to know that the letters “are not from any election organization such as the state board of elections, secretary of state or a county clerk’s office. We did not send this out, even though we are all referenced in the letter.”

She added, “I would never discourage anyone from registering to vote, as long as what they were being presented was transparent.”

The letters from CVI “creates confusion and deceit by indicating that someone at the address may not be registered to vote.”

Bottom said she believes that if the organization was legitimate, the person’s name would be on the envelope, not “Current Resident” or “Newly Eligible Voter.”

Bottom held up the letter she received at her home which was addressed to “Newly Eligible Voter,” and laughing she said, “I’ve been registered to vote since I was 18.”

Bottom said, “In my opinion, this is not transparent on what they are trying to do. It’s misleading to the public because the top of the letter says, ‘According to our review of publicly available records, someone at this address may not be registered to vote.’”

On the back of the letter is a voter registration form with only the address filled out, Bottom said. Instructions tell the person to fill out the form and send it to their county clerk’s office.

If the organization really had current information on file for the person living at that address, “it should be on the enclosed copy of the voter registration card, not just a street address,” Bottom said.

Receiving such a letter “just creates confusion for the voter who is already registered, who is eligible,” Bottom said, “unless you read the fine print.”

She added, “This plays on our elderly population because they’re the ones who are most easily scammed.” Several older registered voters have not only called her office with their concerns, they’ve also gone to the office in person and asked her about the letter they received.

“They want to know what to do and they’re afraid that their vote is not going to count because they think they aren’t registered to vote, but they are registered.”

“It plants a seed of mistrust of the election, and there’s already enough of that anyway.”

If anyone has a question or wants to double check their voter registration they can contact the Boyle County Clerk’s Office at (859) 238-1110 or visit www.govoteky.com online. Bottom said, “We’re always willing to assist them to make sure that they are registered to vote.”