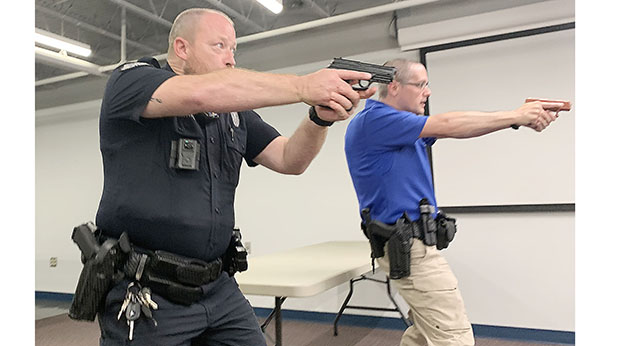 Editor’s note: This is the fifth in a series of articles written to share the experience of members of the current Danville Police Citizens Police Academy. The 10-week academy will teach the members about all aspects of local police work.

Most people will never find themselves in an active shooter situation, but if they do, there are many things to know to help make the situation less deadly.

That message was delivered to members of the Danville Police Citizens Academy Tuesday.

“Without a doubt, unless you’ve been in some sort of frontline battle, if you are ever involved in an active shooter situation that will probably be one of the most traumatic events you are ever in,” Capt. Jonathan Mullins told the members of the class.

“We are always trying to be aware of our surroundings and trying to see things and visualize things before they happen,” Danville Assistant Police Chief Glenn Doan added. “We clear a lot of homes and businesses nightly. If your alarm goes off at your home, and we come and we check it and it’s open, we’re going to go in and check it. We use the same tactics then as we would if there was an active shooter upstairs at city hall.”

Mullins said he has been with the Danville Police Department for 13 years, and he still remembers the first active shooter situation he recalls. He said he was 13 years old when the Columbine High School shooting took place in Colorado in 1999.

“I was 13 years old, and that was pretty traumatic just seeing it on the news, knowing that kids my age went to school that day thinking they were coming home, and they didn’t, all because two guys were bullied and made fun of, and they decided they were going to harm themselves and go in and hurt other people, too,” he said.

“All that breaks down to is run – remove yourself from the area if you can because all you are doing is reducing the number of targets for that active shooter. If you can’t run away, hide. If you’re in an office building, lock yourself in an office, a janitor’s closet, whatever, just get out of the eyesight of that shooter,” he said. “As a last resort, fight. And when I say fight, you’re fighting with everything you have in you, you’re fighting for your life. You’re going up against somebody with a gun, so you’re going to have to use whatever you’ve got on you, if it’s a pocket knife, if it’s a chair, a fire extinguisher, a broom, whatever. You’re fighting for your life.”

Mullins said police show up on the scene of an active shooter situation with one goal, and that is to stop the threat. He said many times, the mere presence of law enforcement officers lead the shooter to take their own life.

“Statistics show that when confronted by law enforcement, most encounters end in seconds,” said Danville Police Chief Tony Gray. “When I first started, the original thought was we waited until we got three if not four officers on the scene and went in a formation. Now that’s not it. You go by yourself.”

In a real active shooter situation, Mullins said officers will do an initial sweep of the building followed by a secondary sweep. They will then get EMS to tend to anyone who has been injured, but he stressed that officers will not stop on their way into a shooting scene to care for victims.

Doan added that the wounded will be treated later, but the duty of officers is to go to the gunfire and stop the threat.

“Could we have saved somebody’s life if we had stopped and rendered aid? Possibly. But we could also have just let seven more get killed because we stopped and attended to that wounded person,” Doan said.

Nobody is expected to try to be a hero in an active shooting scene, and the run, hide, fight system is intended to get people out of harm’s way as quickly as possible. Mullins stressed that when leaving a building, if a person encounters police officers entering the scene, the civilian should be sure to raise their hands and make sure officers know they are not armed and that they are not the shooter. They should also follow all orders issued by officers on the scene.

When running, he said personal belongings should be the last thing a person worries about.

“If you can grab your cell phone and put it in your pocket, great. If it’s in the next room and you hear shots, get out,” Mullins said.

In addition to getting to safety, Doan said people should also be the best witness possible, getting as many details to share with officers as they can. He said vague descriptions with little detail can make things harder for officers trying to determine the identity of a shooter on a scene.

Those details about the shooter can be very valuable, especially if the shooter later ends up being in the same room as the people who were ushered to safety. Gray said in the January 2018 shooting at Marshal County High School in Kentucky, the shooter got rid of his weapon and was able to enter the safe place where students were taken following the shooting.

Doan said most attacks are well planned, and he referenced the 1997 North Hollywood shootout that took place between two bank robbers and police in Los Angeles. The robbers were actually better equipped than the police officers with high-powered weapons and even body armor.

“That’s when we really started upping our weapons. We were outgunned and outmanned. There were two shooters who robbed a bank. They had body armor on, and you’ve got police officers who were responding then with six-shot revolvers and things like that,” Doan said. “That is when the focus really came to getting AR-15s and getting more modern weapons in the hands of the police because it was pretty easy for people like this to get access to them, and we didn’t have them.”

Doan said the FBI’s definition of an active shooter is one or more individuals actively engaged in killing or attempting to kill people in a populated area. In 2019, there were 28 active shooter incidents in the United States, and that number was 27 in 2018. Doan said four law enforcement officers were killed in that time frame, with another 15 being wounded in 2019 and six wounded in 2018.

Officers demonstrated the methods they use to clear buildings when there is a potential danger inside, or if they simply don’t know if there is anyone inside in a situation such as an alarm being reported at a business or a home. Members of the class also got the opportunity to go through drills and experience the situations officers could face.

Are officers always on duty?

When asked about officers being off duty, and especially about driving their police cruisers while off duty, Doan said officers can do that, but the privilege also comes with responsibility.

“We do allow our officers to drive their vehicles home, and we do allow them to drive their vehicles within Boyle County. If they need to run an errand or something they can use their police vehicle, but in doing that, the responsibility comes with it that if something happens, you need to be ready to act because now you’re in a marked police car and you’ve got equipment with you.”

He added that having officers take their vehicles home has been beneficial in situations in the past, allowing officers to quickly be available when called for a situation that might arise.

“Sometimes it looks like we’ve got more officers on duty than we really have, so it’s also a deterrent when they drive a marked police cruiser,” Doan added.

He added that motorist assists are a big part of having officers drive their cruisers home. He said that according to the department’s policy, if an officer sees a motorist in need of assistance and they are driving their cruiser, they are supposed to stop and assist, even if they are off duty.

Mullins said officers can usually tell if another person is an officer, even if they are off duty, and Doan said most will attempt to not look like a police officer when off duty, especially once they have been on the job for a while.

Next up: Weeks 6 and 7 of the 2020 Danville Police Citizens Academy are scheduled to focus on traffic stops.