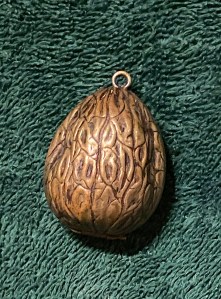 Question: Hey Jerry, I got this at a yard sale or an auction years and years ago. If I remember correctly the seller said that it was a beetle holder. It opens with a hinge and you carried it around your neck to keep your beetle close. What do you say and does it have any value? It’s shaped like a walnut and I guess it’s made of brass.

Answer: Well, I think what you and the former owner were thinking of is a betel nut box. Not to get too deep into something that is not in line with our article, but betel nuts are a type of palm nut that is chewed, mostly through southern and eastern Asia. It is very addictive and damaging to the mouth and throat. This is not what you have.

What you have is a charming Victorian thimble case in the shape of a walnut. It dates to maybe the 1870s, but could be earlier or a little later.

They made them for some time. I think that it’s charming.

Sewing at that time was important and owning fine sewing equipment was a luxury and necessity. So you used containers for your thimbles, scissors and needles and pins. I mean they were expensive. So you kept them close at hand. In this case, the lady of the house would have worn this on a ribbon around her neck or it could have hung off of a chatelaine hook.

A chatelaine was a type of pin, that allowed the lady of the house to have these and other items at her quick disposal. You might have seen them in old movies. They dangled and hung off of her waist and were a big deal. I mean after all, they carried the key to the liquor cabinet, the pantry and the silver case, as well as thimble cases and measuring spoons. 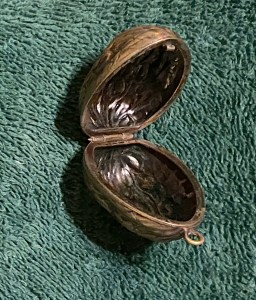 It was likely made in England, maybe in Birmingham. Birmingham was a powerhouse for the manufacturing of metals.

I’ve seen them at good antiques shows before. By the way, sewing enthusiasts are wild about them. You might see one like this one priced for about $45. Thanks for a great question.