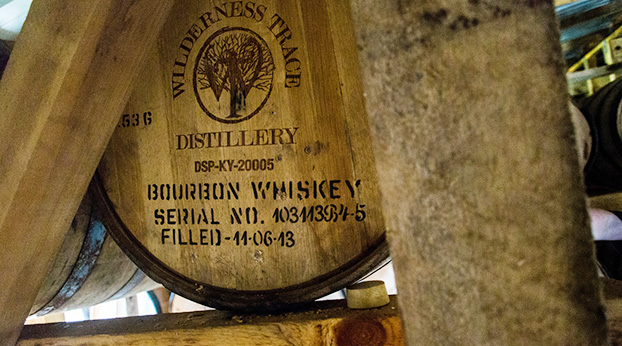 Barrels of bourbon whiskey age in a rickhouse at Wilderness Trail Distillery.

A conditional use permit for rickhouses to store bourbon barrels from Wilderness Trace Distillery has been approved for farmland on Alum Springs Crosspike.

The Boyle County Board of Adjustments approved the distillery’s conditional use permit Wednesday, following a public hearing, but no one from the public spoke either in favor of or against the permit.

Before granting the permit however, the board had suggested that the intersection of Lebanon Road and Alum Springs Crosspike be widened and the road shoulders be improved, either by the the Kentucky Transportation Cabinet, Boyle County Fiscal Court and or the property owners, in order to more safely accommodate semi trucks that would be hauling barrels to and from the distillery. The distillery owners had initially submitted plans for the intersection improvements with its conditional use permit application.

But during Wednesday’s hearing, WTD co-owner Shane Baker explained that upon further research they believed the expensive project wasn’t needed and would even be a “hindrance” to the area.

Baker said the distillery uses flatbed trucks to haul the barrels to and from the distillery, not semi trucks. They will also use regular farming vehicles, such as pickup trucks and tractors, to enter their property off of Alum Springs Cross Pike, just like everyone else who travels on the road. Therefore it shouldn’t be necessary for the distillery or the county to make any changes to the road or intersection, even though everyone’s first thought was that it would be a good idea.

He said from the distillery, “… we see traffic going up and down the road. I don’t know how many times over the years, we’ve seen tractors and trailers jackknife.” He said they probably missed the turn off to American Greetings or LCS Communications or other manufacturing plants, and tried to turn around on the narrow country lane.

If the intersection were widened, “It would be inviting things to happen … It could have opened it up to semi access. Then we started thinking, if they allow semis, where will they go?”

At the furthest end of Alum Springs Cross Pike, “Then they’d have the same problem,” because the semi trucks can’t turn around.

“Then we saw it more of a hindrance if it was widened.”

Another of the board’s concerns was the possibility of water contamination if a rickhouse caught on fire and massive amounts of bourbon was spilled onto the ground.

Baker said recent rickhouse fires happened in buildings that were more than 100 years old. WTD’s rickhouses are only seven years old and are built to strict, modern state codes.

He explained that the design and construction of the storage facilities include basins to trap spilled bourbon and the overflow would be diverted to ponds beside the buildings. These ponds and basins also have links and valves as an extra safety feature.

“There is no chance of alcohol getting into Clark’s Run Creek or into our neighborhoods or anything,” Baker said.

WTD’s rickhouse plans are “robust” and exceed all requirements, he added.

Last year the owners of WTD purchased over 100 acres on Alum Springs Crosspike and Lebanon Road, just across from the distillery’s operations which are on land zoned Industrial. The additional land was to allow WTD to construct 11 more rickhouses in which to store its barrels.

However, the property was zoned Agriculture therefore rickhousese weren’t allowed.

The county’s zoning ordinance was recently amended, which now allows rickhouses on land zoned Agriculture if a conditional use permit is granted by the Boyle County Board of Adjustments.