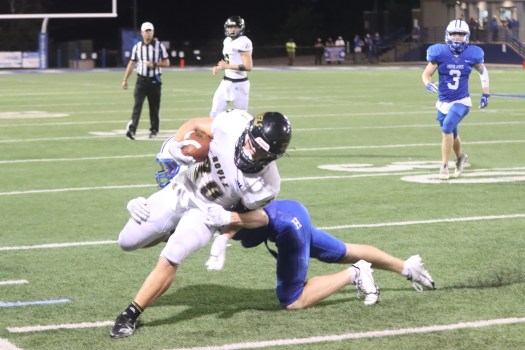 Boyle County running back Will McDaniel tries to fight through a tackle after catching a pass during the third quarter Friday. McDaniel gained 8 yards on the play, and he rushed for 94 yards and two touchdowns for the Rebels. (Mike Marsee photo) 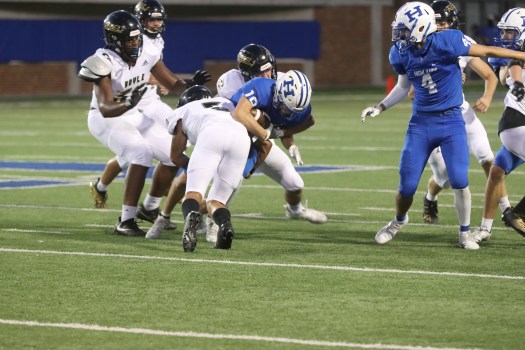 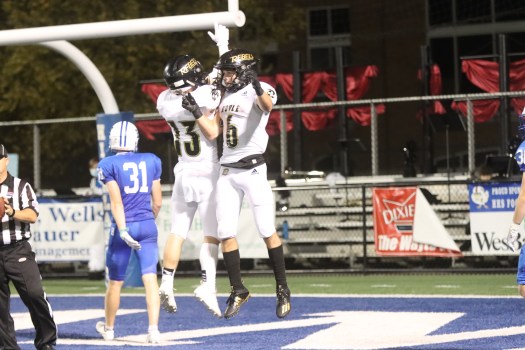 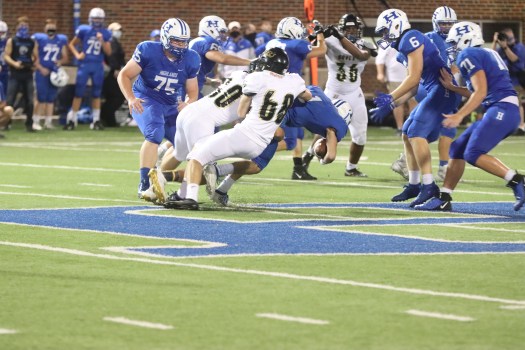 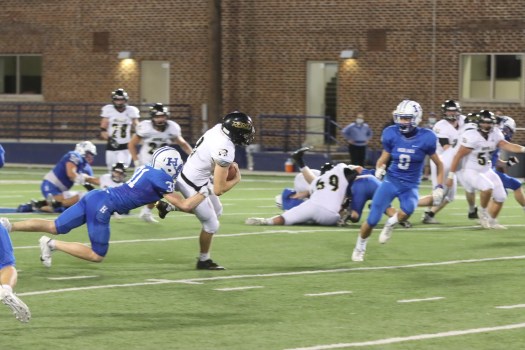 Boyle County quarterback Jagger Gillis tries to fight through a tackle attempt by Highlands’ Bryson Cody during the second quarter Friday. Gillis gained 13 yards on the play, and he scored the first of his two rushing touchdowns three plays later. (Mike Marsee photo) 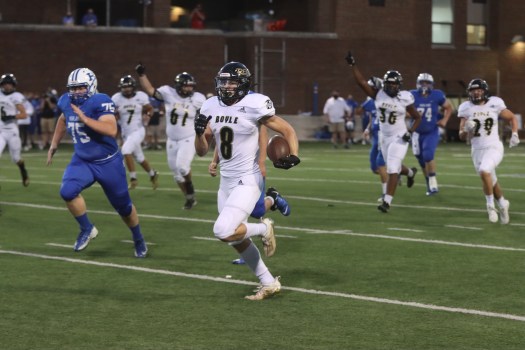 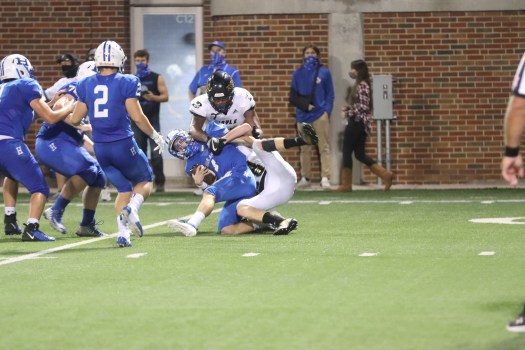 FORT THOMAS — For the second straight week, Boyle County was at its best in the second half.

Boyle had little more breathing room at halftime Friday than was the case a week earlier, but it wasn’t until after halftime that the Rebels really hit their stride in a 46-7 victory over Highlands.

The Rebels scored on their first three possessions of the second half and tightened the screws on the Bluebirds’ offense to pull away for a convincing victory at David Cecil Memorial Stadium.

Boyle (3-0) led 25-7 at halftime even though its offense generated only 111 yards in the first two periods and was kept out of the end zone on its first three series.

“Things didn’t go our way early, and we felt like we left some points out there, but our kids kept fighting,” Boyle coach Justin Haddix said. “We came in at halftime and made adjustments and went out and played better in the second half.”

The Rebels got 218 of their 329 offensive yards in the second half, while their defense held Highlands (1-2) to 24 yards.

“We’ve still got a lot of things we can clean up, but I’m very proud of our team responding, and that’s what you want to see out of your team,” Haddix said.

Boyle’s defense was effective from the outset, and that unit produced the Rebels’ first touchdown when Luke Sheperson returned an interception 46 yards to the end zone on Highlands’ first possession.

The Rebels made many of their biggest stops on Highlands’ most critical plays. The Bluebirds converted only twice on 11 third-down plays, and they were 0 for 3 on fourth down.

They went for it on fourth down twice in their own territory in the first half — once from their own 43-yard line and once from their 39 — losing yardage on both attempts despite completions by quarterback Charlie Noon.

The second failure led to Boyle’s first offensive touchdown. The Rebels took over at the Highlands 37 and executed their own fourth-down conversion four plays later when Jagger Gillis threw to Cole Lanter for a 27-yard gain to the 9 on fourth-and-8. Gillis scored on the following play, giving Boyle an 18-0 lead early in the second quarter.

Gillis went on to run for two touchdowns and throw for one. He was 13 for 21 for 184 passing yards.

It was 25-0 before Highlands scored just six seconds before halftime, taking advantage of Jason Noe’s 60-yard kickoff return to the Boyle 39.

The Bluebirds didn’t advance beyond the Boyle 43 on any other possession.

Boyle needed only 14 plays to score three times in the third quarter. Lanter had a 41-yard reception during the first of those drives, a 37-yard touchdown catch on the second and a 13-yard catch on the third, and he finished with five receptions for 119 yards.

Will McDaniel rushed for 94 yards and one TD on 20 carries, and Gillis had 28 yards on five rushes.

“I’m very, very proud of our offensive line,” Haddix said. “I felt like we moved them and established the run, and they really couldn’t stop it.”

Nowhere to run: A key element of Boyle’s success on defense was stopping the run. Highlands was more intent on establishing the run than Christian Academy of Louisville, which rushed for 68 yards against the Rebels a week earlier.

The Bluebirds had rushed for 517 yards in their first two games, but they got only a fraction of that total against Boyle, which had a decided size advantage at the line of scrimmage. Highlands’ 10 rushing attempts in the first quarter — with five different backs — netted just 26 yards, and they finished with 44 yards on 26 attempts.

“We couldn’t let them run the ball,” Haddix said. “(Defensive coordinator Jeff) Hester does a great job with our defense. We’re going to stop the run, we’re going to take that away from them where they’ve got to throw it, and our defense did a great job.”

“At practice, our linebackers worked hard on everything, and me, Daulton (Peetz) and Nate (Rush) were at the front of the line (working on) pass rushes,” Ziesmer said.

Haddix said much of that preparation focused on stopping Noon, who ran for 166 yards a week earlier in Highlands’ win over Ryle but was held to 55 yards on 10 carries by the Rebels.

“They were 70 percent run and 30 percent pass (in their first two games), and a lot of their passing (formations were) the quarterback scrambling and taking off, so we had to contain him,” Haddix said.

When Highlands was forced to pass, Boyle brought pressure. The Rebels sacked Noon three times in the second half, with Zeismer getting one sack, Coleman Clark getting one and Jacob Heist and Ben Rush combining for one.

Zeismer said the Rebels’ pass rush has been one of the most significant areas of improvement for the defense since the start of practice.

“I think we’ve improved on pass rushes for sure,” he said. “We’re more explosive and we’re quick with our reads. We’ve really been working on reading (opponents’) techniques and their formations.”

Highlands finished with 98 yards, one more than it had last year in a 30-0 loss at Boyle.

Extra points: This was officially Boyle’s second win in three games at Highlands, but its first on the field; its 2004 victory was by forfeit. It also was the first mercy rule game in the brief history of this series, which Boyle leads 5-3. The clock runs continuously once the scoring margin reaches at least 36 points; it did so in this game for the final 14:32.

A limited number of Highlands students was permitted to attend the game, marking the first time this season Boyle has played before anyone other than immediate family members admitted on vouchers issued to players due to stadium capacity reductions necessitated by the COVID-19 pandemic.

Boyle kicker Jackson Smith attempted a 49-yard field goal in the second quarter, but it landed in the end zone. “He can make that kick, and we’ve got confidence in him to do it,” Haddix said. “If he tells me, ‘Hey, it’s in my range,’ we’re going to go.” Smith nailed a 35-yard field goal for the Rebels’ first score. … Sheperson’s interception return gave Boyle a defensive touchdown for the second consecutive game. … The Rebels had no turnovers for the second time in three games.

Bye for now: Boyle has an open date this week before playing its three District 4A-5 games on consecutive Fridays, beginning with an Oct. 9 game at Lexington Catholic (1-1).

Haddix said the Rebels’ practices in the coming days will be all about getting ready for the district games against Lexington Catholic, Anderson County and Bourbon County. He said that starts with working on some of the mistakes the offense made Friday, including five penalties.

“We’ve got to clean up some little, small things, like false starts,” Haddix said. “We can’t have those stupid penalties and hurt ourselves. Good teams don’t hurt themselves, and we can’t do that.

Haddix said the Rebels’ progress has been good over the first three weeks of the eight-game season.

“But we’re nowhere near where we could be,” he said. “We tell them, ‘You’ve got potential, and we want to see that every week,’ and we’ve got keep getting better each week.”

Haddix said attendance restrictions will probably make this bye Friday unlike any other for him and his staff because they likely won’t be able to scout future opponents in person.

“We probably can’t even get a ticket,” he said.