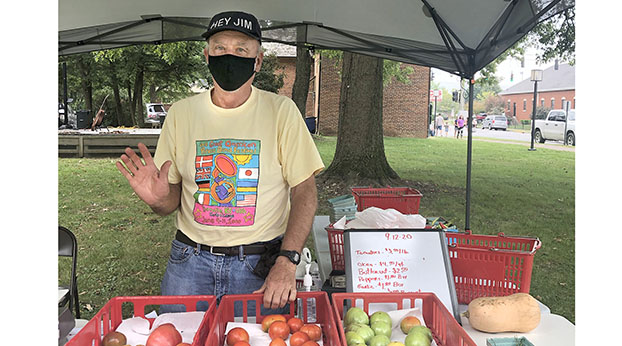 Jim Minteer sells produce at the Boyle County Farmers Market that he raises on his Barn 28 Farm on Ky. 34.

Jim Minteer’s farm is easily recognizable because of the “Go Big Blue” slogan painted on the side of one of his barns on Ky. 34, just across from Old Bridge subdivision.

Minteer said many years ago, the University of Kentucky’s football coach at that time wanted the logo painted on barns around the state. The coach fell out of favor with UK and left, and now the university won’t put a fresh coat of paint on the sign, he said, even though it’s fading.

Minteer said he bought the 11.4-acre farm several years ago from the Hunt Brothers, who had numbered the barns they owned around the area. The barns on Minteer’s farm are numbers 28, 29 and 30.

Barn 30 has the painted UK logo. But he named his property Barn 28 Farm, he said.

The growing season is “quickly coming to an end,” Minteer said. But he’s still bringing his produce to the Boyle County Farmers Market on Saturdays at Constitution Square Park. The market ends on Oct. 10.

Over the summer, he and his “co-gardener” Stacy, who didn’t want to give her last name, he said chuckling, have grown tomatoes, beans, peppers, corn, okra, squash, herbs and sunflowers and zinnias.

Minteer retired from Allison Abrasives in Lancaster, he said. “And the garden is really my retirement project. … “I just like to see things grow.”

He said they plant seeds in a small greenhouse near Barn 28, and put them in the ground when the time is right.

Minteer has been selling his produce at the local market since 2013. And this year, he expanded his production by 40%, he said.

He said everything they bring to the market is “picked fresh the day before and vine ripened.” Nothing is picked well in advance of Saturday, he added.

This season, Minteer tried growing a large variety of heirloom tomatoes in order to “figure out which ones are the best to raise in this area.”

And he’s already looking forward to the next growing season, here in central Kentucky.

Next year, he said they will concentrate on growing the ones that proved to be better suited for this area.