Despite his age, Hinkle says he’s ready to serve as new county treasurer 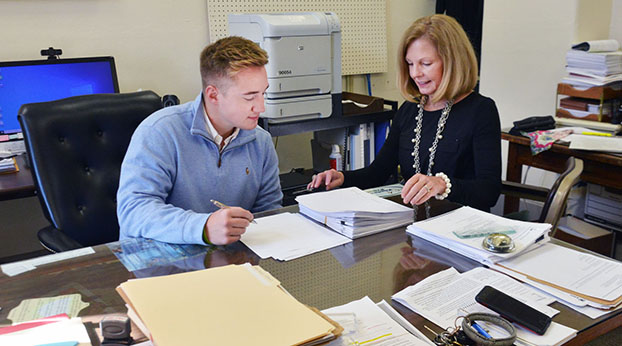 Boyle County’s new treasurer, Keagan Hinkle, is a 2015 graduate of Boyle County High School, a 2019 graduate of Georgetown College, and he will be responsible for the county’s $40 million annual budget. On Thursday, Hinkle replaced Mary Conley, who retired after 28 years as treasurer on Wednesday.

Hinkle thanked the Boyle County Fiscal Court Tuesday for giving him the opportunity to handle such an important job. He said, “I know maybe some of you in here, and along with some of the leaders throughout the county may have some fear and some doubt, because of my age and my experience, about my capability to succeed as this county’s next treasurer, and that’s OK with me.”

He said he wanted to reassure everyone that he was ready for the challenge.

“As I take this role head-on, I promise to give you all my best efforts and to do what is best for the taxpayers of this place that I call home. I’m excited to bring new insights and new ideas to the table and I can’t wait to see what’s in store for us.”

Hinkle added, “From a young age, my parents always taught me to have confidence in myself. And if you’ve been around me long enough, you know that’s not something that I lack,” which caused the magistrates to break out into laughter.

Hinkle was hired just two months ago as the county’s finance officer. Conley said about the same time, she had talked with County Judge-executive Howard Hunt about the possibility of her retiring and how Hinkle was already proving to be thorough and had the degree needed to take over the position.

Just a few days on the job, they asked Hinkle if he would be interested in the treasurer’s position.

Hinkle said at first he didn’t think he was ready. But Hunt told him he had decided to split the duties that Conley was handling into two positions — treasurer and county administrator.

That’s when he felt he could handle the treasurer responsibilities, Hinkle said Wednesday.

Conley said Hinkle had the qualifications, the right degree and did very well with the accounts payable.

“He has a good understanding of balancing and notices errors,” Conley said. So he’s been working as assistant treasurer for the past several weeks learning the different aspects of the job such as making sure all county departments function within their budgets, signing checks, inspecting payroll, and making quarterly reports to the state, just to mention a few.

Hinkle said he is “very thankful for Ms. Mary and for what she has taught me in such a short amount of time.”

He graduated in 2019 with a bachelor’s degree in accounting and minored in communications.

When he got out of college, Hinkle said he wasn’t sure what he wanted to do for a career, so he went to work for his dad at Kentucky Spray Foam Insulation for a while. Then he tried his hand at selling health insurance before he was hired as the county’s finance officer, Hinkle said.

The new county administrator is Julie Wagner, who comes on board in mid-October. Her duties will include policy creation, upper management human resources, grant writing and reimbursements and managing the county’s self-insurance.

The financial officer is Moriah King, whom Hinkle has already trained.

Once Hinkle and Wagner begin working together, “We’ll be attached at the  hip,” he said.

Hinkle plans on staying in Boyle County for his entire career. He said in the future when he marries and has children, “My kids will be Rebels.”