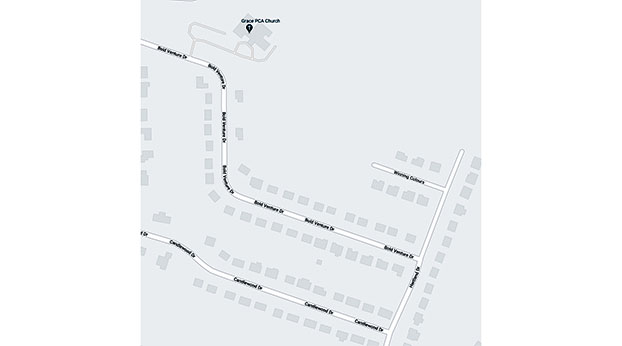 The first reading of an ordinance for the zone change from R1-A to R1-C for Winning Colors was approved by the Danville city commission on Monday, Sept. 28. This is in regards to a proposed rezone of tracts of land containing approximately 5.323 currently vacant acres at 0 Winning Colors Drive. (Screenshot from Google Maps)

Update: At a special called Danville City Commission meeting Oct. 26, the second reading of the ordinance for the zone change from R1-A to R1-C was approved, making the change official.

The first reading of an ordinance for the zone change from R1-A to R1-C for Winning Colors was approved by the Danville city commission on Monday, Sept. 28. In order to be officially put into place, the ordinance must receive an approved second reading. The applicant, Joedy Sharpe Construction Company, Inc., also the property owner, proposed to rezone tracts of land containing 5.323 acres that are currently vacant at 0 Winning Colors Drive, according to a Danville-Boyle County Planning and Zoning Commission zone change staff report. A public hearing regarding the proposed zone change was held Aug. 26, according to the report.

The current R1-A designation holds that the property is currently zoned for single-family residential lots a minimum of about a quarter of an acre each, said Steve Hunter, Planning and Zoning Commission director. The proposed R1-C designation would still hold that single-family residential properties be built on the vacant land but would decrease the minimum size of the lots with the zone change, allowing for more housing to fit in the space. However, Hunter said, houses built on the land can still be of same or similar size as the existing surrounding houses. The difference would be that many of the homes would have a smaller, narrower front yard space because many of the lots would be narrower and the houses would be closer to the street and have a deeper backyard compared to the front yard. This reflects a larger trend, he said.

“People like their backyard space, but it’s not typical that you need a real deep front yard anymore,” Hunter said.

There is also a plan for the expansion of Winning Colors to connect it to Bold Venture Drive, which is unrelated to the zone change and which would allow for a street on which new homes would reside. Coffey said connecting the roads is part of “good planning” and was considered with previous phases of development.

Coffey said the purpose of the expansion of the road is to provide transportation alternatives. For example, he said, residents of Winning Colors could choose not to drive the whole of Bold Venture Drive to gain access to their street off of Hartland Drive.

“They could turn left onto the new street and access their portion of the neighborhood directly,” Coffey said in an email.

With the expansion of the road comes the possibility of the installation of a stop sign, which Coffey said, if installed, would be in place as traffic approaches Bold Venture Drive. As for the amount of traffic changing in the area as new residents move onto the newer, smaller lots, Coffey said Bold Venture has the extra capacity to hold the additional volume of cars that would be going through the neighborhood.

“In order to slow neighborhood traffic or improve intersection safety sometimes stop signs are added,” Coffey said in an email. “For this new intersection this could mean that a stop sign on Bold Venture may be added in the future, but that’s to be determined.”