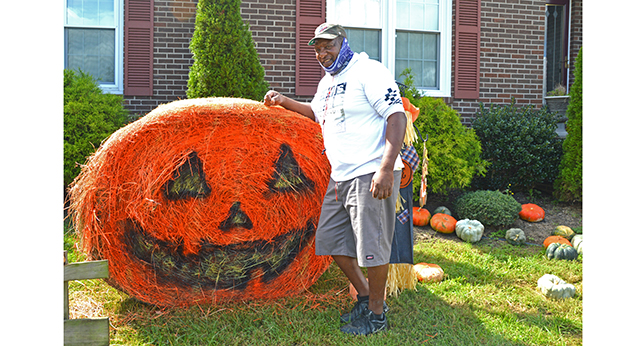 Ernest Gooch stands on his front lawn, where he has placed dozens of pumpkins. This is his second year providing free pumpkins in his yard for children and other members of the community. (Olivia Mohr photo)

Gooch buys the pumpkins from an Amish community by the box and sets them up in his yard. This is his second year setting up the pumpkin patch, and it’s an undertaking he took on with his granddaughters. Gooch said he enjoys thinking up ways for children to have fun, and he said there’s nothing quite like a pumpkin patch. He said there’s something almost magical about the feeling of going to a pumpkin patch and choosing a pumpkin of one’s own, something he does with his family every year, so he wanted to emulate that same feeling right in his front yard.

He said Halloween will look a lot different this year with the limitations the COVID-19 pandemic will put on festivities, but it doesn’t mean children can’t have fun. They’ll find a way, he said, and his pumpkin patch aims to help them do just that — provide fun for the whole family and spread joy.

“That’s what I like,” he said. “I like to see people’s faces and having fun with each other and forgetting about crazy stuff, and there’s a lot of crazy stuff going on.”

Gooch said he will continue the pumpkin patch until sometime in November or “when the pumpkins run out.” Gooch put some of what he described as “ugly” pumpkins out in his yard this year, too, he said, not just smooth, round, orange ones. Some are multi-colored and lumpy. Sometimes the kids prefer them. And, he said, children always know which pumpkin is the one they want.

“A lot of little kids, the little ones, they like the ugly ones,” he said with a chuckle.

Gooch has a total of five grandchildren, and his granddaughters Tru and Shooter Gooch help him with the pumpkin patch. Tru painted the hay bale to look like a jack-o-lantern, and Shooter helped set out the pumpkins in the yard. Last year at one point, pumpkins filled the whole yard, he said.

“It was pumpkin city out here last year,” he said, laughing. 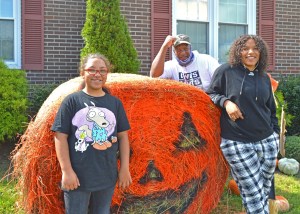 Ernest Gooch is pictured with his granddaughters Shooter, left, and Tru, far right, who helped him set up the “pumpkin patch” in his yard. Tru painted the hay bale and Shooter helped set out pumpkins. (Olivia Mohr photo)

This isn’t the first activity for children that Gooch has come up with, and his nieces often get the word out about his undertakings through Facebook and other methods. For example, in the past, Gooch has planned ways for children to get involved in the Great American Brass Band Festival. He planned the projects as his own grandchildren were growing up, and he said he always wants them to join in and get involved with something, and he wants to involve children in the community, too.

“There’s something about a kid’s smile that lights up,” he said. “There’s even more when you see the parents and the grandparents and they’re enjoying themselves because that kid is actually just doing something kids want to do.”

One year for the festival, he made planes out of old cardboard refrigerator boxes and put them on red wagons for children to ride in during the parade. Another time, around the time of the Kentucky Derby, he thought of making horses for children to ride. The horses were on wheels, and some children pulled the horses while other children rode them. The kids wore jockey outfits Gooch said he got from a friend of his who owns racing stables. Another year, along with another man, he made what looked like small hot air balloons for the kids. He strapped large balloons to carts with netting and encouraged children to decorate the carts according to whatever theme they wanted.

Gooch said he gets help sometimes for projects from the United Parcel Service, from which he retired after 32 years, and Lowe’s, a business he said also enjoys giving back to children. He also has his own cleaning service and washes windows, so he meets people and gets the word out about projects that way as well. He said one great thing about the community is that he will go to people with an idea and sometimes they offer to donate and help him put it together.

“It’s about having fun,” Gooch said. “It’s about being together and doing something that you can just say, ‘Hey, I’m a big kid at heart.’”

He said he always encourages his family to think big as well. His granddaughter Tru said Gooch likes to involve his grandchildren in his ideas, so they’re never really bored.

“Most of them are crazy and a little out there, but they’re fun,” she said.

She said the pumpkin patch in the front yard is nice especially during the pandemic because she didn’t get to do her regular pumpkin patch visit this year and because trick-or-treating and other Halloween festivities are uncertain and risky this year.

“It’s just something here to have at home,” she said.