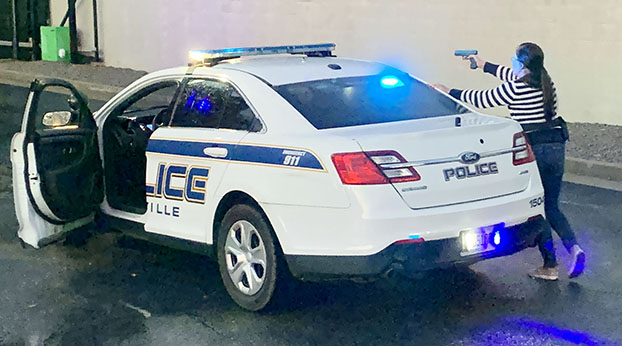 April Drake, a member of the Danville Police Citizens Academy class, seeks cover behind her cruiser during a simulated traffic stop. (File photo by Jeff Moreland)

Editor’s note: This is the seventh in a series of articles written to share the experience of members of the current Danville Police Citizens Police Academy. The 10-week academy will teach the members about all aspects of local police work. 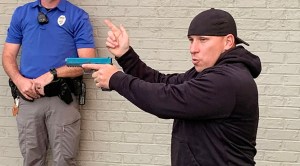 Assistant Danville Police Chief Glenn Doan demonstrates the use of a gun that fires training ammunition, known as simunitions. Members of the Danville Police Citizens Academy fired the gun at Doan as he portrayed a threat during simulated traffic stops Tuesday. (Jeff Moreland photo)

When an officer steps out of his cruiser for a traffic stop, he never knows what he will face when he reaches the vehicle. Anything can happen, including encounters that require deadly force. An officer never knows when he will have to defend his own life or the life of someone else.

Doan provided statistics from the website Officer Down Memorial Page, www.odmp.org. So far in 2020, there have been 206 line-of-duty deaths of officers in the United States. Doan said that number is higher than usual because of COVID-19 deaths. He said there have been 114 deaths of officers nationally that are related to the disease, and those are based on evidence that the disease was contracted from a call or that the officer had contact with someone who was infected.

The deaths in 2020 include 35 involving gunfire and four from inadvertent gunfire, such as accidental discharge of a weapon. Fifteen officers have died in automobile crashes while on duty, and seven were struck by a vehicle in accidents. Ten officers have been killed as the result of an assault with a vehicle when a suspect intentionally struck the officer.

Other officer deaths on duty include drowning (3), duty-related illness (3), heart attack (5), vehicle pursuits (2), motorcycle crash (2), aircraft accident (1), and one from an assault of a deputy who worked as a correctional officer. Doan said that case was from a state where a sheriff’s office operates a jail, and the deputy was assaulted in the jail, not during a traffic stop.

Doan said four officers have died this year as a result of their duties from the terrorist attacks of Sept. 11, 2001. He said those numbers are still being tracked, and officers continue to die in connection.

There have been 186 male officers and 20 female officers who have died in 2020. The average age of an officer who died of causes related to duty is 47, and the average officer had 16 years and 10 months of service time in their career at their time of death.

“These are numbers that we don’t want to contribute to the stats. Our job every night is to go home. Our job is to train our officers and give them the best chance they have at surviving incidents should somebody try to hurt them, shoot them, kill them,” Doan said.

Members of the class watched several videos showing officers making traffic stops in which deadly force was involved. In some instances, the officers were shot and died. In others, the officers had to use deadly force to protect themselves, and as a result, the suspect was killed or injured. Another case showed an officer who made a traffic stop and unnecessarily used deadly force on a driver.

One of the cases involved the 1992 traffic stop in South Carolina that led to the death of Trooper Mark Coates. He was shot by a suspect who had acted courteously but changed his behavior when Coates began to conduct a pat-down on the suspect. The man lunged at Coates, taking him to the ground. As the two struggled, the man told Coates he would kill him, then fired a single shot that struck Coates in the armpit and pierced his aorta, leading to his death just seconds later.

Having seen officers in action, members of the class got an opportunity to experience a traffic stop themselves.

Doan, along with other Danville officers, set up the scene for any member interested to make a traffic stop in the parking lot behind the police department. The class member flipped on the lights of the cruiser, then got out to approach the stopped vehicle. Doan served as the suspect, and each time he reacted differently, at times stepping out of the vehicle and putting his hands inside a hooded sweatshirt. Sometimes he would pull a red training pistol being used for the drill and the class member would have to react, taking cover and firing their own gun at him. The class members used a gun that fired simunitions, or simulated ammunition.

“They will shoot a projectile that will look just like a regular round from a pistol, but on the end of it is a hard piece of plastic that is encapsulated in something like soap, so when it hits, it does leave a mark to show where you’ve been hit,” Doan explained.

Next up: Week 8 (Oct. 13) of the 2020 Danville Police Citizens Academy is scheduled to visit the Boyle County Courthouse to learn about court proceedings from the county attorney and assistant county attorney. They will cover items such as how bonds are set, how pleas are handled in cases, and more. The academy will not meet on Oct. 6 due to fall break.