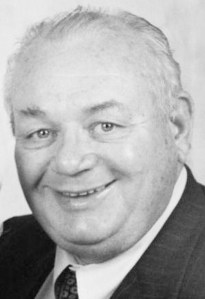 Maynard was the first of six children, born and raised on the Lay farm on Herrington Lake. When he was ten the family moved to Danville where he lived with his family until he entered the U.S. Navy.

Maynard met Virginia Carpenter, the love of his life and wife of 65 years, by chance at a bus stop when he was just 16. Their meeting and courtship was one of his favorite stories. They were married in his parents’ living room while he was on leave from the Navy in 1950. Maynard and Virginia moved around in his early career but settled in 1964 in Granville, Ohio where they raised their five children.

Maynard enjoyed boating, fishing, gardening and spending time with his children. Forty years later, in 2004, they built and moved into their dream home near the Lay Farm on Herrington Lake. They enjoyed living closer to their siblings and having lots of room for visits from their children, grandchildren, and great grandchildren.

Maynard and Virginia enjoyed going to Florida each winter with other family snowbirds for many years, as long as their health made it possible. Virginia passed away in May 2016.

For health reasons Maynard moved to The Thomson Hood Veterans Center in Wilmore, KY April 2019. He celebrated his 88th birthday there and a few days later passed away.

Maynard served in the US Navy from 1950 to 1953 as an electronic technician, ET2. After the Navy he entered the University of Kentucky and graduated in 1957 with a degree in Electrical Engineering. Maynard worked as a research and development engineer for Sperry Microwave Electronics in Florida, Philco in Washington, DC, and US Public Health Service in Cincinnati, Ohio.

In 1963 he was employed by the Directorate of Metrology of the U.S. Airforce in Newark, Ohio. There he was responsible for calibration systems supporting aircraft communications, missiles and various weapon systems. During his time at the Metrology Program he returned to Ohio State University to complete his Master’s Degree in Electrical Engineering in 1968.

He retired from the Air Force in 1987 after 25 years of service. In 1991 he returned to the workforce as a cellular equipment engineer for AT&T Wireless, which later became Lucent Technologies. He retired again in 1997.

One of Maynard’s last stories was the one where he acknowledged Jesus as his Lord and Savior. Never very religious most of his life, he made this decision late in life and was very proud to tell everyone.

He joined the First Church of God in Danville and attended when he was able.

The Lay family is grateful for all the angels who comforted and cared for him in his time of need: his beloved siblings: James L, Gerald, Ruth, Carol, and Bill; faithful caregiver, Angel King; staff at Central Baptist Hospital; staff and volunteers at Thomson Hood Veterans Center; and staff at Bluegrass Hospice.