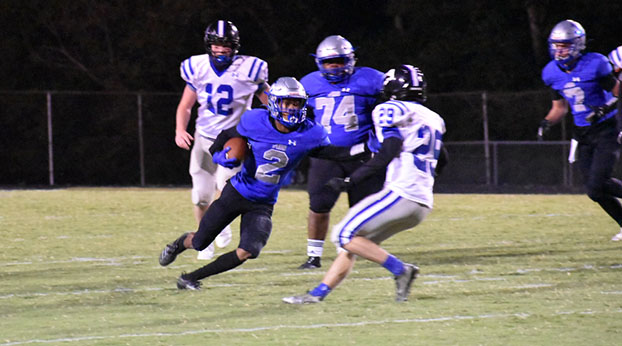 Danville's Corydon Crawford runs the ball in the Admirals' win over Mason County Friday., ahead of a block from Catavyon Whitehead-Webb (74). (Elliot Boures photo) 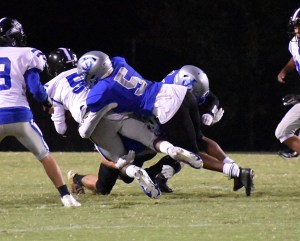 Danville didn’t know if they would get to play at all this week when this week’s scheduled opponent, Allen County-Scottsville, was listed in the Covid-19 “Red Zone” and Danville officials decided it wasn’t safe to play the Patriots.

Meanwhile, Mason County had two such games. First, they were supposed to play Frankfort and when that game was canceled, the Royals scheduled a game with Mercer County. Then, Mercer was declared to be in the “Red Zone” and that game was also canceled.

On Wednesday, Danville and Mason decided to play Friday at Admiral Stadium.

Senior Corydon Crawford had five catches for 88 yards, ran for 47 more, and scored twice while Caleb Burns added 138 yards and one score as Danville rolled over Mason 41-7.

“I don’t know if we had quite the game we had last week but it’s hard to be up for every single week,” Danville coach Clay Clevenger said. “I thought we were a little flat in the first quarter, but all in all we played pretty well defensively.”

They limited Mason (2-1) to just 134 yards total offense and their starting unit kept the Royals out of the end zone.

“Obviously, we have to get the ball in Corydon (Crawford) and Caleb (Burns) hands as much as possible,” Clevenger added. “I thought we did a pretty good job, but we were not

nearly as sharp as we were last week. (Sophomore quarterback) Sage (Dawson) wasn’t as sharp tonight but he is only a sophomore and is going to miss some. However, for the most part, we got the ball to where we needed it.”

The Danville coach was pleased with his offensive line, especially in the second half.

“Our O-line did a pretty good job tonight. We have a group of seniors (Hagen Burns, Christian Evans, Alex Gutierrez-Jacobs, and Ethan Scott have seen it all and has a lot of pressure on them.”

Danville scored in the first quarter on the first of two 25-yard touchdown passes to Crawford, then tacked on a pair of scores in period two to lead 20-0 at the half. Dawson scored on a one-yard run while Blake Jones, en route to a 44-yard touchdown catch, had the ball knocked out of his hands into the end zone, and he recovered the loose pigskin in the end zone for what turned into a fumble recovery in the end zone.

Crawford had his second 25-yard touchdown catch for the first of two third period scores, then had a 47 yard run after a high snap on a punt attempt to set up Burns’ two-yard scoring run and Danville carried a 34-0 lead into the fourth quarter.

Brady Johnson gained 59 of the Ads’ 68 yards on their final drive of the night and scored from two yards out to make it 41-0 and set the running clock in motion before Mason scored against Danville’s reserves with 2:25 to play.

“We had a lot of distractions this week,” Clevenger said. “The big win last week took a little out of us, but for the most part, I thought we handled that pretty well. We have a lot of seniors and they are dialed in right now.”

NEXT UP: The Admirals host defending 2A State Champions Somerset in the first of three straight district games next Friday.

“They are the defending state champions and have a lot of players back from last year,” Clevenger said. “They have one of the best quarterbacks in the state, Keiya Sheron. We have to have a really good week of preparation and have to come out and be sharp to give ourselves a chance.”