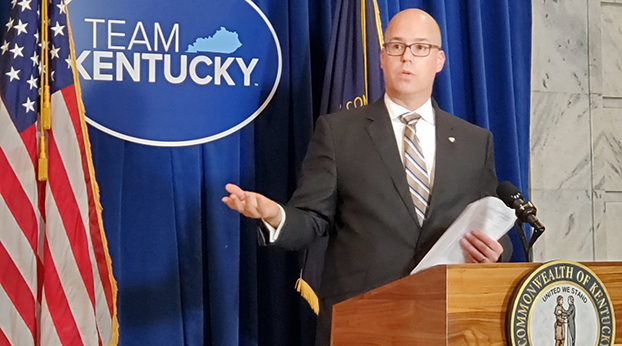 Kentucky is well on its way to a third straight week of a record number of cases of the coronavirus, Gov. Andy Beshear said during a Tuesday press briefing at the Capitol.

“We still have a lor of work to do,” he said.  “We are reporting 1,054 new cases of COVID-19.  That’s more than any Tuesday in the last four weeks, including the highest two weeks on record, which have been the last two weeks.”

A total of 144 of the new cases reported to state public health officials were children 18 or younger.  There have now been 74,194 cases in Kentucky, since the first one was reported on March 6.  Kentucky’s two largest counties contributed over a third of that total, as Jefferson County had 190 and Fayette County 185.

“We are experiencing an escalation, our third major escalation in this COVID crisis, and it is significant,” Beshear said. “Last week we had 6,126 positive cases and we are on pace to have more than that this week.”

The governor said more cases equal more people lost.  “In the United States there is a 2.8 percent mortality rate for people who contract COVID.  I’m proud, that in Kentucky, we’ve got some great doctors and nurses and health care workers, and we’re at 1.7 percent, 1.1 percent less than the national average.  But 6,126 cases of COVID-19 with the mortality rate we have would be 104 Kentuckians, just from last week’s cases, we will lose. That’s just one week.”

He also said 592 Kentuckians are currently hospitalized with the coronavirus, 150 of whom are in the ICU, with 93 of them on a ventilator.

As of Tuesday, there have been over 1,552,000 coronavirus tests performed in Kentucky. The positivity rate was 4.29 percent, down from 4.69 percent on Monday, and at least 12,751 Kentuckians have recovered from the virus.

State Public Health Commissioner Dr. Steven Stack addressed statements made by people who say the coronavirus is no worse than the flu.  “The flu killed 22,000 Americans last season.  COVID has already killed nearly 220,000. Any way that you extrapolate into this, this disease, COVID-19, is at least ten times more fatal than influenza.”

He repeated his advice: “Please, wear the masks, socially distance, and follow our other guidelines.  They are really simple and they’re really low-tech, but they actually work.  If we do all this together, that’s how schools stay open, universities stay open, businesses stay open, and people get back to activities.”

Stack added, in addition to following the rules and guidance, Kentuckians need to fight against complacency and exhaustion.

Amy Cubbage, deputy secretary of the Labor Cabinet, gave an update on the unemployment insurance situation in Kentucky.

“The Kentucky Office of Unemployment Insurance has paid in excess of $4.1 billion in benefits to Kentuckians, benefits for the most part that get spent at our businesses and have an economic impact multiple times more than that $4.1 billion,” she said.

Nonetheless, Cubbage noted some claims have been denied or are still being processed. She noted that the rules governing unemployment insurance payouts come largely from the federal Department of Labor.

“The eligible claims payment rate is staying at the same level as pre-pandemic, about 80%” she said.

Cubbage also provided an update on the federal Lost Wages Assistance (LWA) program from the Federal Emergency Management Agency, which provides an additional $400 per week for those who qualify.

She said Kentucky’s Office of Unemployment Insurance has paid out about $245 million in LWA benefits, covering the weeks of Aug. 1 through Sept. 5.Cubbage said some have been confused by the federal program’s eligibility rules and urged anyone with questions to go to the frequently asked questions section on the Kentucky Career Center’s webpage.

Read updated key numbers, actions and other information from the Beshear administration on the response to the pandemic at kycovid19.ky.gov.