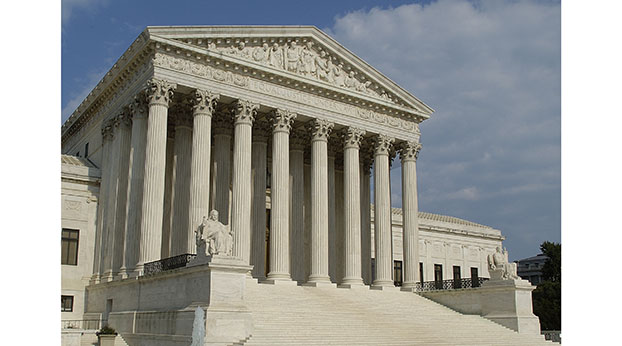 Supreme Court of the United States

A case the U.S. Supreme Court refused to accept Monday offers evidence of the damage inflicted upon religious freedom by its five-year-old decision that legalized same-sex marriage, two justices said.

“By choosing to privilege a novel constitutional right over the religious liberty interests explicitly protected in the First Amendment, and by doing so undemocratically, the Court has created a problem that only it can fix. Until then, Obergefell will continue to have ‘ruinous consequences for religious liberty,’” Thomas wrote, quoting his dissent from the 2015 decision.

In Obergefell, the Supreme Court ruled 5-4 that states must recognize marriages between people of the same sex, thereby providing a new definition throughout the country of an institution created by God as a covenant between a man and a woman. Before the justices expanded same-sex marriage to all 50 states, it already was legal in 37 states and the District of Columbia. Court rulings had produced legal gay marriage in more than two-thirds of those states.

The appeal rejected Oct. 5 by the high court involved Kim Davis, who had sought an accommodation as the clerk of Rowan County for her religiously based objection to issuing marriage licenses to same-sex couples. Some couples sued Davis, a Christian who believed providing a license “under her name and authority” as county clerk would endorse the union and violate her conscience. Her effort to have the suits dismissed on the basis of qualified immunity failed in both federal court and the Sixth Circuit Court of Appeals in Cincinnati.

Thomas and Alito – who, along with Chief Justice John Roberts and the late Antonin Scalia, dissented from the 2015 opinion – agreed with the decision not to grant review to the lower court ruling. Davis’ appeal “implicates important questions about the scope of our decision in Obergefell, but it does not cleanly present them,” Thomas wrote.

Davis, Thomas wrote, “may have been one of the first victims of this Court’s cavalier treatment of religion in its Obergefell decision, but she will not be the last. Due to Obergefell, those with sincerely held religious beliefs concerning marriage will find it increasingly difficult to participate in society without running afoul of Obergefell and its effect on other antidiscrimination laws.”

Instead of permitting states to adopt same-sex marriage democratically and to refuse to protect religious freedom, the Supreme Court forced “that choice upon society through its creation of atextual constitutional rights and its ungenerous interpretation of the Free Exercise Clause, leaving those with religious objections in the lurch,” he wrote.

In addition, Obergefell “enables courts and governments to brand religious adherents who believe that marriage is between one man and one woman as bigots, making their religious liberty concerns that much easier to dismiss,” Thomas wrote.

The Supreme Court’s Obergefell opinion, written by then-Associate Justice Anthony Kennedy, was based on the Due Process and Equal Protection clauses of the 14th Amendment, though a right to same-sex marriage “is found nowhere in the text,” Thomas wrote.

Dissenting justices, as well as Southern Baptist leaders and other defenders of biblical/traditional marriage, expressed concerns about the future of religious freedom after Obergefell.

Russell Moore, president of the Ethics & Religious Liberty Commission, said at the time the high court’s ruling would have “wide-ranging and perilous consequences” for religious freedom.

“In the wake of this decision, we must ensure that the American principles of pluralism and religious liberty are maintained, as the religious convictions of millions of Americans necessarily cause us to hold a different, more ancient, view of marriage than the one the Court has imposed,” Moore said.

Albert Mohler Jr., president of Southern Baptist Theological Seminary, said during his “The Briefing” podcast Tuesday (Oct. 6), “We pointed out again and again and again that when you try to create out of the blue this kind of newly constructed right that isn’t in the Constitution to say the least, but is rather a part of this new moral revolution, then you are creating a right that will run into direct conflict inevitably with religious liberty.”

Since Obergefell, the conflict in courts between religious liberty and sexual liberty has continued in cases involving wedding vendors, adoption agencies, and other institutions and businesses.

The Oct. 5 statement came as the U.S. Senate prepares to hold confirmation hearings on Amy Coney Barrett, the Supreme Court nominee who is supported by conservatives and opposed by advocates for gay rights, including same-sex marriage.