Question: Hi Mr. Sampson. My mom and dad loved Halloween and through the years collected so much of it. Most of it is modern from stores like Dillard’s or even Big Lots. Are these things worth anything? I know they aren’t old but I wanted to ask first before I let some things go. Almost everything is in the original box and still works. But is there a market for things that are new like this but are holiday oriented? 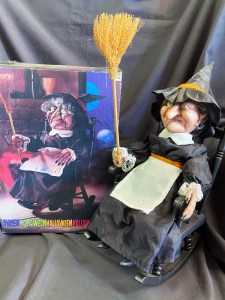 Back in the glory days of holiday decorations, the pre WWI years and earlier, can be outrageously expensive today. They were made mostly in Germany and were sold by the boatloads and were enjoyed for several years until being thrown away.

I say inexpensively, the quality that went into these pieces far out shines the work that is being done today on a commercial level. But back in 1910, 50 cents was some big money. So you have to adjust for inflation.

But here’s the rub. Today, they are still inexpensive decorations, unless you’re dealing with

high end department stores or artist made pieces. BUT, they manufactured them by the millions! I mean to the point that it’s in the gross metric tons. So the supply is askew. What about demand?

Here is what I’ve found out from my own store over the years. If modern Halloween decorations are based on a popular character, say like Peanuts, Garfield or even a movie with a cult following, it stands a good chance of having a fan base. If it’s a really classic style and looks like something from the Victorian times, or up to the 1950s, it will appeal to decorators and those interested in things that are timeless.

Remember too that anything that’s Hallmark will have a built in audience. All periods of Hallmark items are collectible.

But again, we’re trying to predict the future, and in antiques and collectibles, that is a tough call.

Remember those Jack O’ Lanterns that were common back in the 30s? That same piece MIGHT sell for $75 today.

I would keep what you like and let some other collectors enjoy your parents’ collection. Thanks for a great question.