Director/actor says next WTH play about kindergarteners perfectly timed; will offer some appreciation for the simple things in life 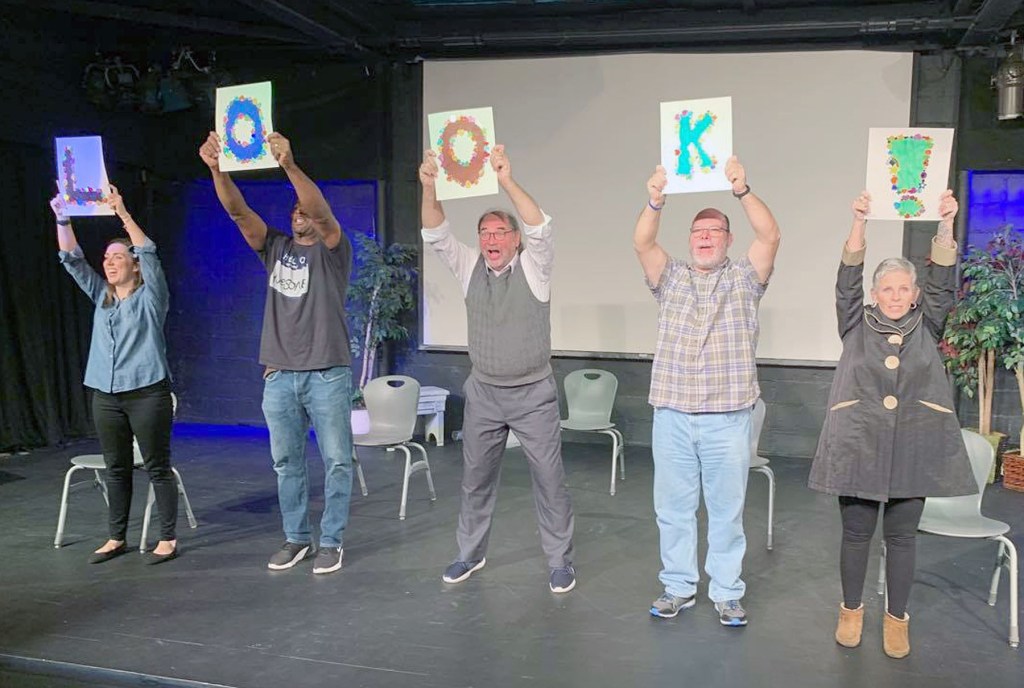 The cast of “All I Really Need To Know I Learned In Kindergarten” rehearses over the weekend at West T. Hill Community Theatre. They are, from left: Julie Taylor (who is also the director), Mark Porter, Steve Sleeper, Darell Rickmers and Mary Caroll Porter.

Director Julie Taylor says the title of the next show at West T. Hill Community Theatre can be a bit deceiving. “All I Really Need To Know I Learned In Kindergarten” isn’t just about a class of kids.

“The show is a storytelling compilation made up of five different books by Robert Fulghum — sort of like seeing ‘Chicken Soup for the Soul’ on stage,” she says. The play begins with a kindergarten class that’s very enthusiastic about learning and trying new things.

“And just being OK with being themselves. The rest of the stories play off those ideas. As adults, we forget a lot of those things, but through this play, we are reminded that it’s important to share, stick together, live a balanced life and be aware of wonder.” 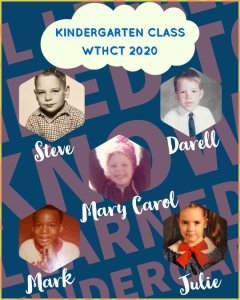 Taylor says no auditions were held to cast the production due to the COVID-19 pandemic, so it was precast. “We only had a month to get it all together, so we needed people we could count on. Some names came to mind who fit the characters that we needed, and everyone we asked was happy to be a part of it.”

And Taylor not only directs the show, but is also in it — along with Steve Sleeper, Darell Rickmers, Mark Porter and Mary Carol Porter. Taylor’s husband, Chuck, is assistant director, who is doing lights and sound, as well as the voice of an off-stage narrator.

“We’ve all worked together numerous times, so I knew that we could handle the short timeframe and make this show really come to life,” Taylor says. “And I was right! Everyone has really jumped in with both feet. It’s fun to work with people who have great ideas for  developing their characters and have enough experience on the stage to make some decisions without needing too much directing.”

And Taylor’s two children, Maggie and Eli Powell, are also helping out — she says Maggie is working backstage and Eli is helping in the booth. “Also, Brandon Long helped out — he made a bench for us to use in the show.” And Madison Porter has also been lending a hand, like manning the playbook to help keep the cast on th 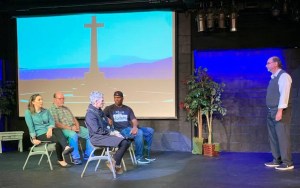 Other workarounds due to the pandemic were required, such as the full cast wearing masks during rehearsals, and being mindful of space when staging the show as well. Some songs in the show were actually cut, because they didn’t feel safe singing without masks.

“WTH is also limited the number of tickets sold for each performance to 30, so that audience members are able to socially distance properly,” Taylor says. And volunteers will sanitize the building before each performance.

Taylor says, “We want to make sure that everyone who sees the show feels safe, and that we are being responsible during COVID-19.”

Taylor says the play will appeal to “anyone who wants to laugh a little, feel a connection with someone else, or maybe even shed a few tears.” There are funny moments, she says, along with some great stories, “and some scenes that make you think about life.”

Anyone who sees the show will be able to draw a personal connection with more than one of the stories, Taylor says. She hopes they walk away having a better appreciation for the simple things in life, “and with the confidence to be themselves in a world that tries to make everyone fit into certain boxes.”

Taylor says if they don’t have a “life-changing experience,” at least they’ll get out of the house for a couple of hours, and be able to see other people and share some laughs.

“We live in such a divided world right now, and this show provides the opportunity to see that we all really have some things in common, and if we are able to remember that about each other, it will allow us to be more compassionate and kind — which will only make the world a better place.”

IF YOU GO (Info box inset in copy)

“All I Really Need To Know I Learned In Kindergarten” opens Friday at West T. Hill Community Theatre and runs for two weekends, Oct. 16-18 and 23-25. Showtimes are 8 p.m. on Fridays and Saturdays, and 3 p.m. on Sundays. Due to limited seating during the pandemic, no tickets will be sold at the door; all must be purchased at westthill.net.