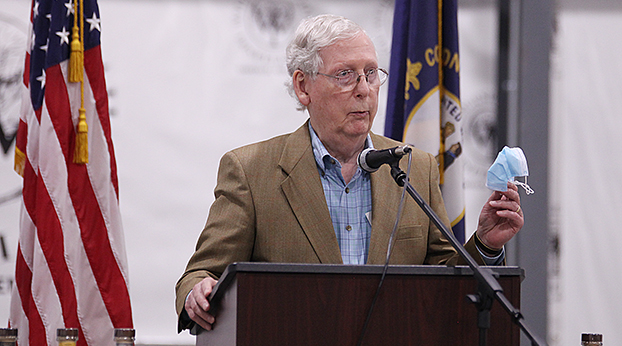 “I want to leave you with hope that, at some point here in the next few months, we may get another rescue package,” he said in his speech.

For Boyle County specifically, he said after the speech that the new bill he wants to put on the floor would provide additional funds for health care providers, which he said he does not imagine Ephraim McDowell Regional Medical Center would be ineligible for, and he said it would replenish the Paycheck Protection Program and make additional funding available for businesses like Wilderness Trail Distillery, including those still struggling during the pandemic. He said the new bill would also target people who make $40,000 and under annually.

Co-founder of Wilderness Trail Distillery Shane Baker said prior to McConnell’s speech that the PPP was helpful to the distillery when the pandemic hit, among other things.

“When the pandemic hit, that forced closures all across our nation,” Baker said. “We’re currently distributed in about 34 states, and so we felt that change immediately in our business, and uncertainty was upon us. We really didn’t know what the next day would bring. And through essential guidance, allowances, the PPP program — basically coming together to help offer opportunities and solutions, we were not only able to retain our employees, but we were able to pivot our operations from bourbon production to hand sanitizer and effectively be able to help our community.”

Now, Baker said, the distillery is in a position for growth this year. Brent Blevins, public health director for the Boyle County Health Department, spoke before Baker and shared with McConnell that when the pandemic hit, Boyle County, like many communities, was looking for personal protective equipment and hand sanitizer. He said that in the middle of March, the department got a call from Wilderness Trail stating that the distillery wanted to make hand sanitizer for the community and that they were not seeking recognition — they just wanted to perform a service. From that, Blevins said, the distillery produced well over 400 to 500 gallons of hand sanitizer they made “on their own dime.” This hand sanitizer went to hospitals, emergency medical services, the police department and other agencies around the community, Blevins said. Then, he said, other counties started reaching out to Boyle County about help, which Blevins said the distillery said they’d be happy to provide.

“It was a great opportunity to show a corporation in this community, a private organization, worked with the health department — we were able to work with some other community organizations — we got United Way involved because we needed help distributing. But it just went to show how, at the time of need, we could pull together and do something that was really cool in this community,” Blevins said.

During his speech, McConnell applauded efforts like what Wilderness Trail Distillery has done with hand sanitizer production. He said the most significant boost to the economy from the CARES Act was the PPP small business loans program, and he said 50,000 Kentucky small businesses accessed over $5.2 billion in these loans.

In Boyle County specifically, he said, in terms of education and health care, there was “$10.2 million for Ephraim McDowell hospital and almost $1 million for Centre College and its students” as a result of the CARES Act.

“We’re hoping maybe we’ll have a little bit more cooperation this time,” he said about the new bill he wants to put on the floor of the Senate. “It’s been very challenging here close to the election.”

The new bill he wants to bring to the floor has a focus of about half a trillion dollars targeted in four areas, and he said of particular interest are small businesses and replenishing the PPP, education, and assistance to health care providers because he said COVID-19 is surging again around the country.

Another thing McConnell emphasized was the effort for a vaccine, and he said there have been “spirited competitions” going on in the pharmaceutical world, with a number of trials underway, and some companies at their own expense are already producing doses in anticipation that a clinical trial goes well. He compared the effort to create a vaccine to the Manhattan Project, the effort to build an atomic bomb to end war with Japan in a hurry during World War II without a ground invasion.