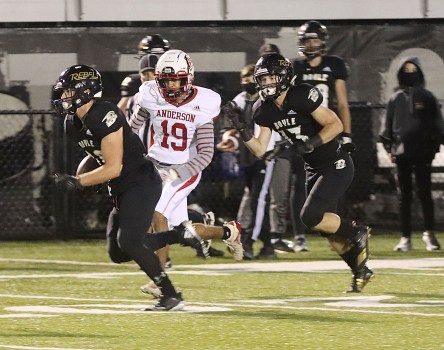 Will McDaniel of Boyle County looks to evade Anderson County’s Austin Beasley on his way to the end zone on a 29-yard touchdown reception during the first quarter Friday. (Mike Marsee photo) 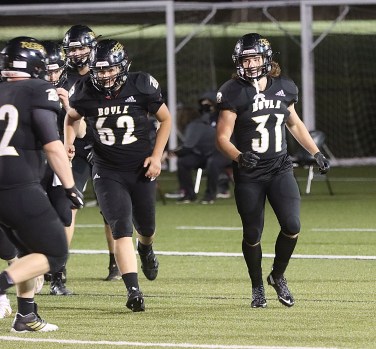 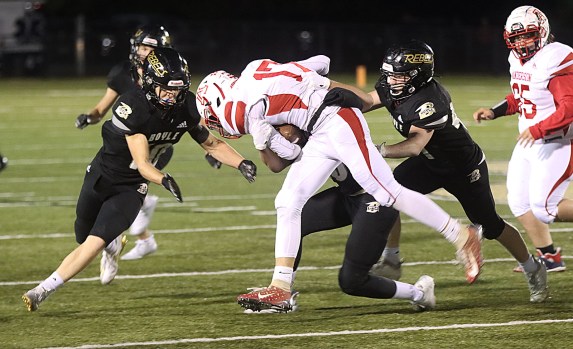 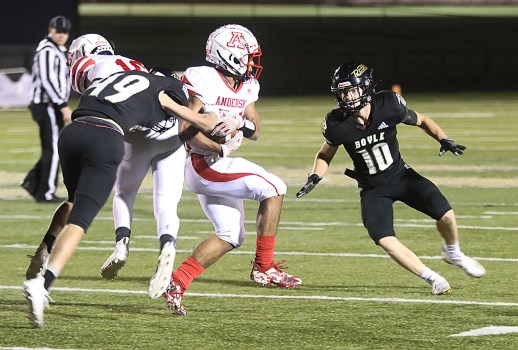 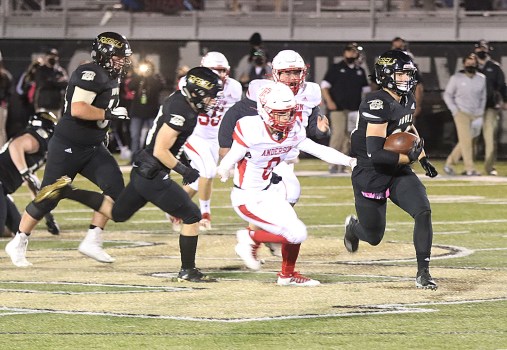 Will McDaniel of Boyle County breaks free on a 62-yard touchdown run during the first quarter Friday. (Mike Marsee photo) 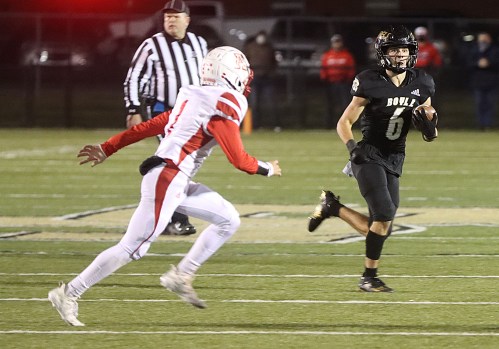 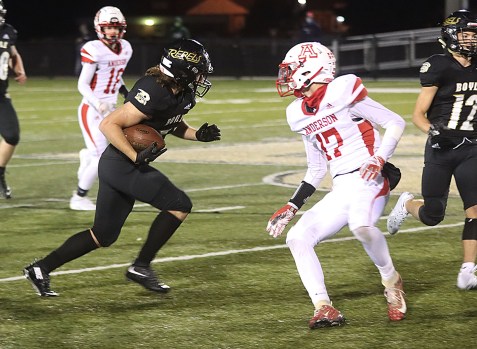 The goal for any football team is to improve from week to week, regardless of who lines up on the other side of the ball.

Jagger Gillis said Boyle County did that Friday night, making progress while taking care of business in a 54-0 romp over Anderson County at Rebel Stadium.

The Boyle quarterback said the Rebels maintained their focus in a game they were expected to win easily.

“We just try to come in here and treat them like any other team and work on ourselves,” Gillis said.

Gillis maintained his focus as well, even as he lined up against players who were his teammates a year ago. He transferred from Anderson to Boyle for his senior year, and he knew this game would be different for him than any before it.

“It felt kind of odd at first,” he said. “Growing up with those guys, it was kind of fun playing against them. It was great to go against the old school. There’s a lot of respect for them.”

Gillis threw for three touchdowns and ran for two against his former school, and he said it didn’t take long once the game got going for this game to feel like any other for him.

There was little doubt about the outcome even before Boyle (5-0, 2-0 District 4A-5) scored two touchdowns in the first two minutes against winless Anderson (0-6, 0-2).

The Rebels, who were playing at home for the first time since their Sept. 11 opener, scored six times in a 41-point first quarter to trigger the running clock rule for the fourth time in five games.

“I feel like this game we did what we were supposed to do, jumped on them early and got going,” Boyle coach Justin Haddix said.

“Going through practice every day, we make sure we stay focused and don’t overlook any team. We treat every day the same,” he said. “I think this week we had really good practices. We focused every day and worked on every day.”

Gillis threw touchdown passes of 8, 36 and 29 yards to Coleman Clark, Eli Glasscock and Will McDaniel, respectively, and he had touchdown runs of 7 and 13 yards. He completed seven of 10 passes for 132 yards and rushed for another 34 yards.

McDaniel broke the ice with a 62-yard TD run on Boyle’s third play from scrimmage — and his only carry of the night.

Six different players reached the end zone for Boyle, which ran only 20 plays on offense and scored on seven of them. Seven plays resulted in gains of at least 23 yards, and the Rebels averaged 16.6 yards per play.

Meanwhile, Boyle’s defense surrendered only one play of more than 10 yards. Anderson netted 3 yards or less on 21 of 33 rushing attempts, and the Bearcats averaged just 1.6 yards per play.

“The style of offense they have, you’ve got to go attack. You can’t sit and catch, and I feel like our guys did a great job,” Haddix said.

Anderson never advanced the ball beyond the Boyle 40-yard line.

Going for seconds: Boyle’s backups got more playing time than they had all season, as the starters were on the sideline for the entire second half.

Haddix said the expectations don’t change even when the lineup does.

“The standard’s the same,” he said. “We told them at halftime, ‘Hey, you’re going in and you’re going to play the whole second half. And we want a shutout and we want to move the ball and score touchdowns.”

The Rebels got the shutout and got one touchdown when Cas Phillips got free for a 60-yard run in the third quarter. It was the second career TD for Phillips, a senior, and his first this season.

Gillis said Boyle’s starters are always rooting for the reserves, who make up the scout team that prepares the starters for the schemes they’ll see from each week’s opponent.

“Throughout the week they give us a great look. And they’re great teammates, so we’ve just got to cheer them on,” Gillis said. “They go out there and they do their job, and we love it. It’s fun to watch them.”

Too much yellow: Boyle was penalized 11 times for 90 yards, and those numbers were too high for Haddix on an otherwise upbeat night.

“I didn’t like all the penalties,” he said. “We had some things we’ve got to clean up.”

The Rebels were flagged four times for personal fouls or unsportsmanlike conduct, but there were also two holding penalties that nullified touchdowns.

“It was frustrating,” Haddix said. “We’ve got to clean some of those things up … and we’ve got to continue to get better each week.”

Extra points: Boyle forced three turnovers and scored following a first-quarter touchdown following a fumble recovery by Tommy Ziesmer … Gillis has accounted for 22 of Boyle’s 32 offensive touchdowns this season. He has 14 passing touchdowns and a team-high eight rushing touchdowns. … Cole Lanter gave Boyle its first special teams touchdown with a 46-yard punt return in the first quarter. … The Rebels rushed for 200 yards and had 332 yards of total offense. Anderson had 58 yards after finishing the first half with minus-5. … Anderson quarterback Jacob Castle completed two of four passes but netted zero yards. … Boyle has posted consecutive shutout victories for the first time since 2009 when the Rebels blanked West Jessamine, East Jessamine, Christian County, and Bourbon County in consecutive weeks.

Game six: Boyle will conclude its three-game district schedule and will attempt to secure its fourth consecutive district championship this Friday at Bourbon County.

The Colonels averaged 464 yards in the three games preceding their loss to LexCath — they forfeited their first game — but they were held to 93 yards by the Knights, and they had three turnovers.

Bourbon relies heavily on the pass, having gained about two-thirds of its offensive yardage through the air.

“They’re going to spread it out, and we’ve got to go over there. It’s going to be a good challenge for us, and we’ll have to play well.”

Two sophomores are splitting time at quarterback for Bourbon, though it isn’t an even split. Clay Estes has thrown for 850 yards and all 10 of the Colonels’ passing touchdowns, and Jaden Commodore has thrown for 151 yards.

Three receivers have more than 20 catches each, led by Kaygen Heflin with 30 receptions for 291 yards.

This will be Boyle’s final road game of the regular season.