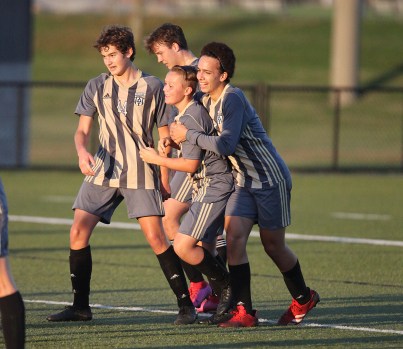 Rebels Tristan Compton, Colbey Yanders, and Gabe Hodge celebrate with Fain Hackney, center, after Hackney scored the Rebels’ second goal of the night in the first half. (Jeff Moreland photo) 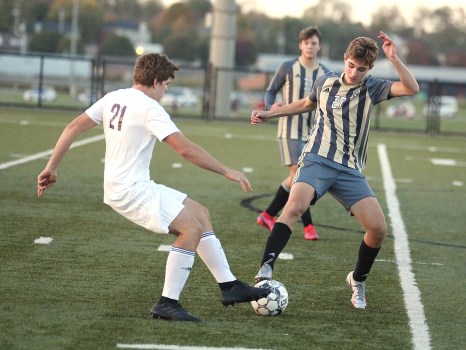 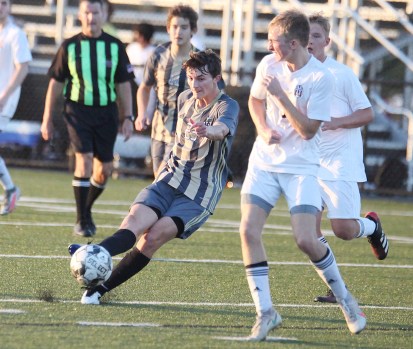 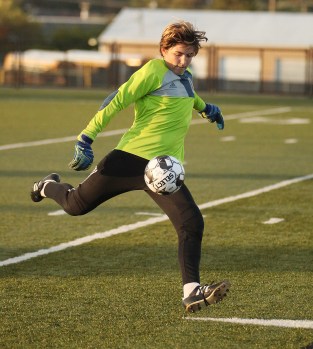 Sophomore goalkeeper Jack Little puts the ball back in play for the Rebels. (Jeff Moreland photo) 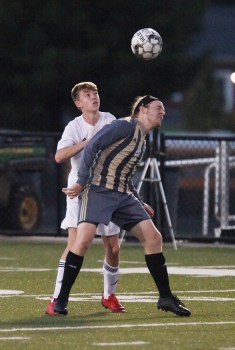 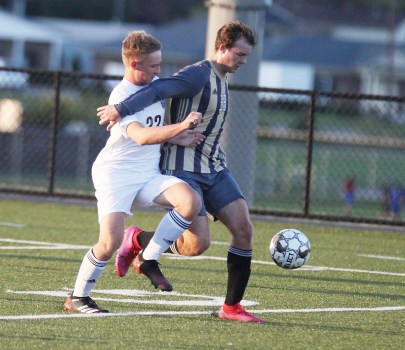 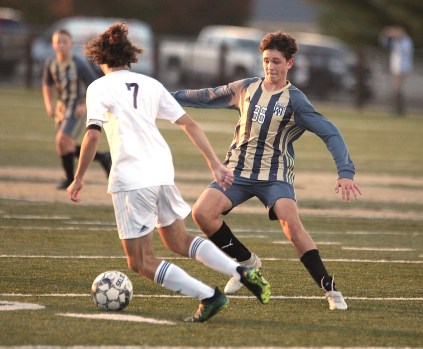 The Boyle County Rebels boys’ soccer team had revenge on their minds yet again.

After getting back at Mercer County, the next step is revenge on West Jessamine for the 4-1 beating that they put on Boyle back in September. There was just one obstacle left, and that was the Pulaski County Maroons.

The Rebels started the game a little slowly, with Pulaski getting some excellent shots on frame, but sophomore goalkeeper Jack Little was up to the task.

Boyle County had the first real scoring opportunity though, with senior Caden Ferrell spraying a through ball over the top and finding senior Gabe Hodge with a one-on-one with the Maroons’ keeper, but pulled his shot wide right.

Ferrell played another through ball over the top and Hodge got onto it yet again and had a very similar situation, but Hodge hit the post this time.

The Rebels used this momentum to their advantage and applied pressure and tried to win the ball back high up the field.

After a Pulaski mistake, Ferrell got the ball in the middle of the field and skilled his way down to the baseline where he pulled it back for Hodge who scuffed his shot and sent it flying over the bar.

The Rebels finally broke the deadlock with sophomore midfielder Tristan Compton putting a ridiculous bend on his shot and finding the bottom left corner to put the Rebels ahead 1-0.

Less than 5 minutes later, Ferrell made another skill run from midfield down to the Pulaski baseline and played a cross into freshman Fain Hackney who one-touched his shot into the net to double the lead.

The Rebels did have a slight dip in intensity in the rest of the first half which gave way to a few more Maroon chances, but sophomore defenders Ben Reynolds and Andrew Leines kept the Pulaski forwards away from the goal.

The second half was not nearly as exciting as the first, but the Rebels dominated possession and only allowed one shot in the entire half.

2-0 was the final score with the Boyle County Rebels getting to the regional championship.

The regional semifinal vs West Jessamine is at 6 p.m. tonight at Boyle County.